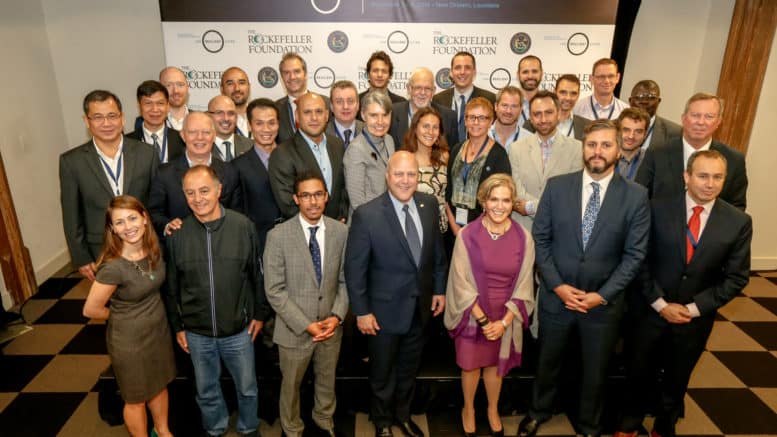 Cities left in the lurch are wondering what happened to the 100RC initiative. Resilience is prescribed in Sustainable Development Goal #11: “Make cities and human settlements inclusive, safe, resilient and sustainable.”  ⁃ TN Editor

In Accra, Ghana, some 70 percent of commuters get around by trotro—privately operated minibuses that charge just a couple of quarters per trip. But trotros are also a bane. Drivers are notorious rule-breakers, jamming intersections and causing crashes. The aging vehicles lack seatbelts and emit noxious fumes that deteriorate Accra’s already poor air.

Trotros neared the top of the list when Accra launched an assessment of its civic weak spots last year, under the mantle of 100 Resilient Cities. That’s the Rockefeller Foundation-sponsored urban resilience network, of which Accra is one of 80 global members. In March 2018, 100 Resilient Cities convened Accra’s elected leaders and international development groups to talk about how transportation challenges, in addition to poor sanitation and flooding, threatened the city’s resilience to fires, cholera outbreaks, and other shocks. Representatives from the Agence Française de Développement, the International Finance Corporation, and the Japan International Cooperation Agency listened in.

The meeting was pretty successful: Towards the end, AFD approached the city with an offer to fund its efforts to upgrade trotros,remembers James Mensah, Accra’s chief resilience officer. A year later, Accra has just released its completed resilience assessment and is working out details with AFD over a large grant. The city hopes to leverage more funding for other projects through its auspicious affiliation with the Rockefeller group. “They have been a very, very important platform for us,” Mensah told CityLab last week.

This is just one example of how 100 Resilient Cities is helping an urbanized corner of the planet become a safer, stronger community. But such opportunities are likely coming to a close. Earlier this month, the Rockefeller Foundation, the U.S.-based philanthropy devoted to promoting “the well-being of humanity throughout the world,” announced plans to wind down financial support for this resilience program. Launched in 2013, 100 Resilient Cities had become one of the largest privately funded climate-change initiatives in the world.

Starting in July, 100 Resilient Cities will no longer have dedicated staff. Its work, which has been supported by $164 million from Rockefeller in six years of existence, will be directed to other “pathways,” according to a statement by 100 Resilient Cities President Michael Berkowitz. A new resilience office within the Rockefeller Foundation will be tasked in part with honoring existing commitments to member cities; some $12 million in funding will  provide severance and job-placement assistance to the roughly 85 employees of 100 Resilient Cities. Rockefeller has also given a $30 million grant to the Adrienne Arsht Center for Resilience at the Atlantic Council, a separate climate change-focused global philanthropy. “The work will continue, but it will look different,” said Matt Herrick, a communications director at the Rockefeller Foundation.
Details are vague on exactly how much support will remain in place for existing member cities. 100 Resilient Cities had set out to fund 100 chief resilience officer (or CRO) positions in municipal governments around the world, and it got to 80. The program had shepherded the creation of resilience strategies in 49 of those 80 cities, including Accra.

Now, as cities endeavor to implement plans for disaster-proof  infrastructure, improved civic cohesion, and other projects that tie into their localized definition of “resilience,” they are wondering how they might do so in the absence of the high-profile organization’s robust offerings—financial support, planning expertise, private-sector connections, and a forum to exchange ideas and best practices.