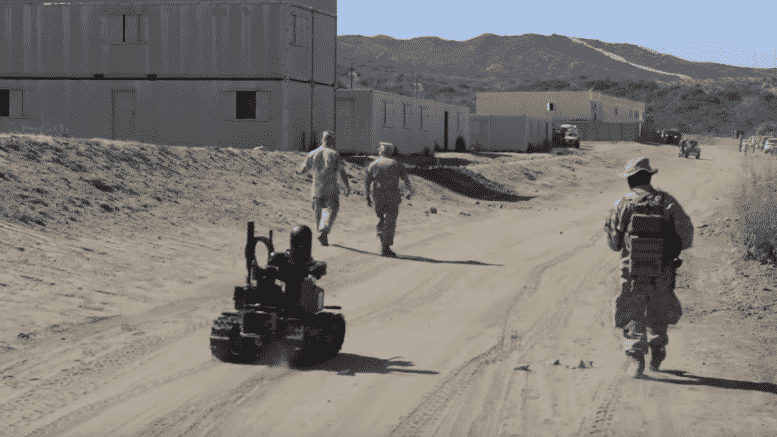 Technocrats in the military think that technology is the answer to warfare, and that means armed robotics ultimately equipped with autonomous AI. China and Russia have responded in kind, sparking an intense development war. Automated killing machines will make the first mechanized war, WW I or the ‘Great War’, appear like a minor skirmish. ⁃ TN Editor

In a historic first, the Army conducted a live fire exercise with a remote-controlled ground combat vehicle armed with a .50-caliber machine gun. It plans to conduct more exercises with more heavily armed ground robots within the next couple of years.

The demonstration was part of the annual Northern Strike exercise, which took place last July and August at Michigan’s Camp Grayling. Primarily geared toward reserve units, this year’s event debuted an unmanned, heavily armed M113armored personnel carrier. The driver and the weapons operator followed behind in a slightly larger M577 command post vehicle.

The scenario here was a complex breach in a minefield,” Paul Rogers, director of the Army’s Tank Automotive Research Development and Engineering Center, or TARDEC, said at the AUVSI conference on Wednesday. “You had engineer platoons with infantry support going in and putting in bangalore torpedos,” long tubes of explosives used to clear mines, he said. The remotely piloted M113 provided suppressive fire as the engineers worked.

It’s the first time that the Army has conducted an exercise with a ground robot providing fire. It won’t be the last. Army leaders have asked for more exercises with bigger guns, said Rogers.  “We’re figuring out the details of what leadership expects and what we can deliver.” (For more on the Army’s plans for unmanned and autonomous robots, check the strategy they published last year.)

The exercise is an important step in understanding how humans and machines will fight together in close quarters, where fields of fire aren’t always clear as they are for a Reaper drone overhead.

Although it’s the first U.S. Army exercise to pair humans and shooting ground robots, it’s not the first time an armed robot was sent out to work next to troops. Shortly after the U.S. invaded Iraq in 2003, troops deployed a mini-tank bot called the SWORDS (short for Special Weapons Observation Reconnaissance Detection System) from weapons maker Foster Miller. By 2007, it was out hunting in the streets, armed with an M249 machine gun. SWORDS was effectively grounded after a series of incidents in which it began to behave unpredictably, swinging its gun in chaotic directions, according to an account of one of the incidents.

(concerning the Marine robots): Whoopie !! just what the world NEEDS–another vicious DEATH MACHINE, to go along with all of the OTHER armaments of war–bombs, grenades, lasers, war-jets,rocket-launchers,tanks, etc.etc. The Military Industrial complex is the MAJOR cause of our country’s economic troubles with BILLIONS being spent on war, and armaments !!! Time to call a HALT, to this colossal WASTE of the taxpayer’s money !!