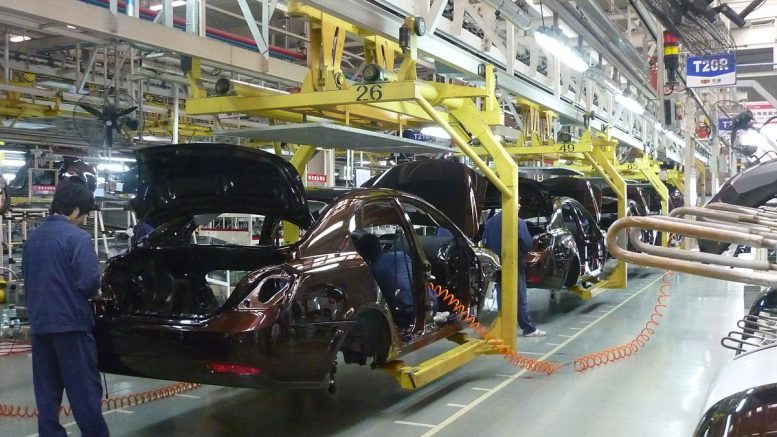 The grass was not greener on the other side of the ocean, and turns out to be a cheap plastic imitation. Companies are not looking for cheaper labor markets since it is cheaper to invest in robotics right where they are. This trend will hit the west like a ton of bricks over time. Read the entire story and pull out the displacement numbers for China alone.⁃ TN Editor

As he marches through a gritty factory that makes baby strollers and wheels, Hu Chengpeng says finding workers is his number one challenge these days. Turnover at the facility in Hanchuan in Hubei province in central China is running at 20 percent, even while wages have been growing by double digits for his 400-plus workers every year. “Labor costs are getting just too high,” he said.

All of which explains why Hu, 34, is embracing China’s robotics revolution. He has added 40 new robots, each costing 40,000 yuan ($5,850), this year to replace dozens of workers tasked with cutting plastic molding. Eventually the factory will use a quarter fewer workers than today, without having to reduce annual production, he said. Hu also said he plans to shift more production away from making simple components and towards producing higher-margin branded strollers.

With real wages more than doubling in the last decade, manufacturers are automating, investing in research and development, and adding new higher-value products, according to the latest findings of the China Employer-Employee Survey (CEES), carried out by the Wuhan University Institute of Quality Development Strategy, Chinese Academy of Social Sciences, Stanford University, and the HKUST Institute for Emerging Market Studies.

China is no longer the cheap labor haven it once was. Monthly manufacturing wages reached 4,126 yuan at the end of 2015, equal to those in Brazil but much higher than Mexico, Thailand, Malaysia, Vietnam, and India.

At the same time, many firms are relying on government subsidies, while barely eking out profits or even losing money, according to the study released June 20. “Time is running out fast for Chinese manufacturers to adapt,” says Albert Park, head of the survey’s international committee and a labor economist at The Hong Kong University of Science and Technology.

The study canvassed more than 1,200 companies and 11,300 workers in Guangdong, China’s biggest manufacturing province, and Hubei, a major industrial base in central China. Some 26 percent of workers left their jobs annually in Guangdong and that turnover rate was even higher for younger workers, about 37 percent for employees below 28.