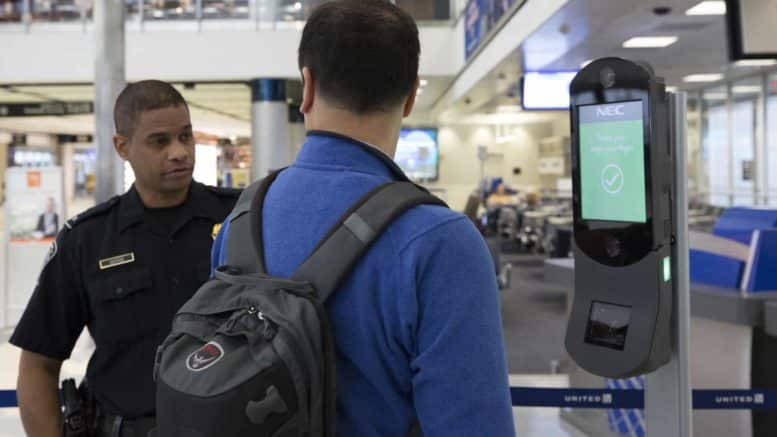 Please Share This Story!
PDF 📄
The Department of Homeland Security is impervious to restraint on turning America into a microcosm of China with ubiquitous facial recognition systems. There is no justification to scan everyone to find the few. ⁃ TN Editor

Lawmakers and civil liberties advocates are calling on the Department of Homeland Security (DHS) to halt plans to begin using facial recognition technology on nearly all departing air passengers within the next four years.

The agency’s plan has reignited the fight over the sensitive technology. Critics say facial recognition technology is not ready for large-scale deployment and that DHS has failed to establish specific rules to prevent abuses and policies for handling the collected data.

“The Department of Homeland Security is plowing ahead with its program to scan travelers’ faces, and it’s doing so in absence of adequate safeguards against privacy invasions, data breaches, and racial bias,” Sen. Ed Markey (D-Mass.) said in a statement to The Hill. “Homeland Security should change course and stop its deployment of facial recognition technology until it meets that standard.”

Markey and Sen. Mike Lee (R-Utah) have raised these concerns with DHS over the past year, releasing statements and sending letters to the agency urging it to halt the program until it puts specific safeguards in place. So far, according to Markey’s office, the department has ignored their warnings.

DHS has been implementing its “biometric exit” program, which photographs some visitors when they are departing the U.S., for years, expanding to 15 major airports with plans to reach five more. President Trump in 2017 signed an executive order speeding up the rollout of the face-scanning technology, and Congress in 2016 authorized up to $1 billion over the next 10 years to implement the program.

The DHS report published last week, which was provided to the House and Senate judiciary committees, is the latest sign that Customs and Border Protection (CBP) — DHS’s largest federal law enforcement agency — is fast-tracking the implementation of the program at the country’s largest airports.

That has privacy advocates in an uproar. They say DHS is ignoring concerns that facial recognition technology wrongly recognizes certain populations at higher rates and allegations that the agency ignored formal procedures required to implement such a wide-ranging program.

“DHS wants to scan your face before it has issued formal rules to protect your privacy,” Harrison Rudolph, an associate at Georgetown Law’s Center on Privacy and Technology, told The Hill. “Without rules, there could be little that stands in the way of DHS breaking its privacy promises. That’s deeply alarming.”

According to a tranche of documents released by the Electronic Privacy Information Center last month, CBP skipped parts of the formal rulemaking process that requires federal agencies to solicit public comments before they adopt technology that will be used on U.S. citizens.

Privacy advocates have continued to call for CBP to undertake a rulemaking process, which would allow them to push for safeguards and limits on its data collection.

“. . . but it captures the faces of U.S. citizens as well. The agency says it has successfully identified 7,000 people at major U.S. airports who have overstayed their visas.” So, the program is already in use and now we have to stop them while they ignore the law and continue to implement their police state vision of America? Great. Homeland Security is anything BUT. Congress has been shown to have no teeth–these are the People’s representatives! They whine more than act. When they act those actions, more often than not, are empty. The elected officials have become POTUS… Read more »