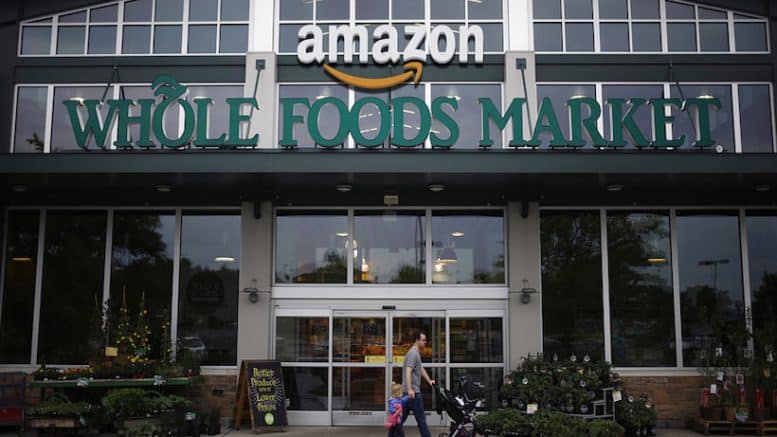 Amazon Technocrat overlords are punishing Whole Foods’ vendors by demanding that they change their business practices to match Amazon’s, and they are being charged for the privilege. This article points out that it’s about data and Amazon wants all of it. If the food brokers don’t want to be slaves to Amazon, they will quit selling to Whole Foods and drive Amazon out of the food industry.  ⁃ TN Editor

Tensions between Whole Foods Market and some of the most important brands it sells in its stores will come to a head on March 19, when they will congregate for a recently announced summit, sources familiar with the situation tell CNBC.

The grocer notified certain vendors about the meeting by email last Saturday. It is set to reassure the brands of relations after Whole Foods’ sale to Amazon. It comes after a rocky few months for the grocer, which has been trying to shift from a local orientation to a national one, without sacrificing the selection and relations that set it apart from larger peers like Kroger and Albertsons.

Some of those efforts, like its move to centralize purchases, preceded its sale to Amazon. However, any change the grocer makes is drawing more scrutiny amid the uncertainty following Amazon’s acquisition.

Meantime, Whole Foods’ limited communication about the status of these changes has been a point of frustration, according to multiple vendors that spoke to CNBC.

A major point of debate for its larger vendors is the new servicing fee, proposed in the last few months, which will charge vendors for Whole Foods’ efforts to centralize its merchandising, sources said. Still, some of the sources noted their reliance on Whole Foods as a customer gives them little power with which to bargain.

Traditionally, with both Whole Foods and most grocers, food companies could pay brokers to help manage everything that happens from the grocery stock room to the shelves. The distance from the back room to shelves has been called some of the most expensive mileage on the planet.

These brokers fulfill a number of functions, but their key role is to make sure products are displayed well and taken care of. That could mean anything from making sure there are more granola bars on the shelf when those bars are on sale, keeping the freshest yogurt on the top of rack, or strategically hiding under-stocked goods. Brokers can also use the relationships they wield to make their case for more shelf-space.

Now, Whole Foods wants to control that process, and will charge some companies roughly 3 to 5 percent of sales for the service. The shift was first reported by the Washington Post.

Vendors are not happy. Some say that fee is too high. Others note that being forced to use Whole Foods’ systems hurts their relationship with their personal brokers, on whom they rely for the rest of their grocery business. By paying Whole Foods to do the merchandising, vendors have less money and less product to give their brokers that manage relations with other retailers.