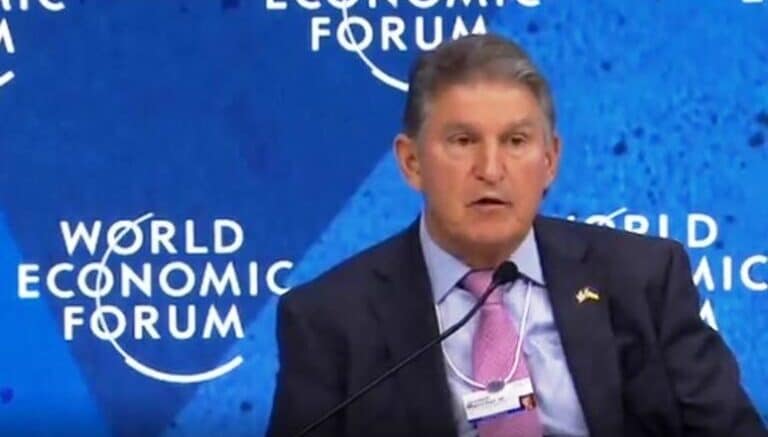 Please Share This Story!
PDF 📄
Dear American politicians: America and Americans are not for sale. We are not your prostitute that you can pimp to the Davos cult that pushes the Great Reset and the destruction of America. History will record all of you on the same page as the revolutionary traitor Benedict Arnold. ⁃ TN Editor

U.S. politicians who receive invitations to the World Economic Forum’s annual meeting in Davos, Switzerland, always seem to say stupid things, or stay silent when they could speak up for American values.

We have several creepy crawlers over there this week who exude what’s wrong with America – Seth Moulton, Joe Manchin and Brian Kemp. There are many others but, for brevity’s sake, let’s focus on these three as examples of why no U.S. politician worth their salt should attend these meetings.

Vera Jourova, the vice president of values and transparency for the Executive European Commission, speaking Tuesday on a Davos panel with the Orwellian title “The Clear and Present Danger of Disinformation,” predicted the U.S. would soon have hate speech laws, like they do in Europe, regulating what people can and can’t say on the internet.

Here she is, sitting next to the Democrat Congressman from Massachusetts, Seth Moulton, who she taps condescendingly on the arm and laughs as she makes her dystopian prediction. Watch the video below and you’ll see Moulton just smiles and says nothing to rebut her evil prediction.

One would think that, being an American, Congressman Moulton would have politely rebuked this creep from the E.U. and reminded her that we Americans have something called the First Amendment, which guarantees every citizen the right to freely speak their opinions in the public square. It doesn’t matter if she or anyone else deems our opinions “extreme,” nor does it matter how unpopular our opinions may be, they are protected by the First Amendment. That’s just the way it is and always has been in America. It’s what makes us unique in the world.

But no. Moulton, being a good little globalist stooge who was thrilled to get his invitation to rub elbows with the rich and famous of Davos, just sat there like a bump on a log and smiled, accepting the bitter medicine handed to him by the wily witch from Europe.

Now let’s turn to West Virginia Senator Joe Manchin, who also embarrassed himself, and us, while speaking on this same topic of freedom of speech.

Manchin, as a participant on a different panel, brought up the topic of social media platforms and he let it be known that he thinks there is way too much freedom for Americans to say what’s on their minds politically.

Some of us are just too “extreme” and need to be silenced, Manchin implied. He let it be known that he’s no fan of the “open press system” we have in America. He obviously would prefer a closed press system like they have in North Korea or China.

Take a look at his comments in the video below.

The day after Manchin’s outrageous remarks, Fox news helped him backpedal and “explain” his comments. The fact is, Manchin had no business being in Davos for any reason. ⁃ TN Editor

“The problem we have is the open press system and basically all the platforms,” Manchin says. This is Manchin showing his true communist self. After receiving some robust and justified criticism, he tried to walk back his disastrous, anti-American comments in an interview with Maria Bartiromo of Fox News. Sorry Joe, it’s too late. You already spoke your true feelings about your hatred for the U.S. Constitution and its Bill of Rights.

It’s interesting how Manchin finds his American values while speaking to Fox News, the echo chamber of the American right, but when he’s on a global stage speaking to wealthy globalist power elites, he speaks their language, coming down hot and hard against the First Amendment to the U.S. Constitution. This is the worst type of politician, who literally says whatever the audience of the moment wants to hear.

It should be noted that FBI Director Christopher Wray was also in attendance at Davos this week bragging about how the government, “especially the FBI,” works in “collaboration” with Big Tech to censor Americans. To the WEF cartel meeting in Davos, disinformation has been deemed the “most existential problem facing the world” and Wray stands at their beck and call to rein it in.

Now we come to Brian Kemp, the Republican Governor of Georgia, who thought it would be a good idea to “pitch Georgia” to the billionaire globalists at Davos. Kemp criticized this website for calling him out in an earlier article for attending the corrupt WEF’s annual meeting, swearing that he had only innocent intentions of selling the success story of Georgia’s economic prosperity through conservative values.

Notice Kemp said that a lot of the foreign investment he’s lured to Georgia is tied to “electric mobility.”

That’s him riding his nose right up the rear-ends of the Davos globalists, who continuously talk about “net zero emissions” and to get there we need to make everything that currently runs on gasoline, oil, or natural gas run on electricity. Why is that Governor Kemp? If you’d done your homework you would know the answer. Not only is adding all this capacity to the electric grid unsustainable, as we’ve seen in California and other states where they’ve had to tell people to refrain from charging their electric cars due to shortages of power during periods of peak usage, there’s also this: Things that run on electricity are easier to monitor, regulate and control. And that, dear Governor, is what the WEF agenda is all about. CONTROL.

While Governor Kemp was happy to do an interview with the corporate media spinmasters at CNBC, he was less talkative when a real media outlet wanted to ask him a few questions — see video below.

So thanks but no thanks, Governor Kemp. Don’t do us Georgians any favors by “selling” our state out to the globalists pushing an all-new and unsustainable economic system that will ultimately take us back to the dark ages. Please educate yourself on their agenda, the Great Reset, the Fourth Industrial Revolution, depopulation, and how it’s all about using technology to build out the infrastructure of an anti-human control grid.

They want us to live in crowded cities in tiny apartments where there will be a surveillance camera on every corner watching our every move.

They want us to replace meat in our diets with insects and Bill Gates’ lab-grown fake meat.

They want us to submit to continuous injections of modified mRNA poison (watch Pfizer CEO Albert Bourla admit this is the plan in Davos interview  with CNBC), which has already killed millions and disabled millions more.

While Bourla was in Davos promoting annual Covid boosters for all, his counterpart at Moderna, CEO Stephane Bancel, was touting his plan to have a Covid vaccine factory on every continent. Maybe Governor Kemp would like to have one of those factories in Georgia?

Mr. Kemp, this is the agenda of the folks you are trying to impress in Davos while “selling Georgia.”

Instead of trying to woo billionaire foreign investors to Georgia who don’t share our values, Kemp should be focused on creating an environment that will make it easy for small and medium-sized American-based businesses to thrive and grow.

While Kemp thinks he’s there in Davos to sell Georgia, The National File may have nailed the real reason he received an invitation to appear before the elitist club.

The National File reports that Kemp was given a “figurative pat on the head by one of Klaus Schwab’s top men for his refusal to give in to the election integrity movement.”

Seated between the Democrat Governor of Illinois, JB Pritzker, and Delaware Democrat Senator Chris Coons, a close ally of Joe Biden, Governor Kemp was one of just two Republicans taking part in the World Economic Forum’s panel on American governance at Davos, along with Florida Congresswoman Maria Salazar.

When called upon by Børge Brende, the panel’s moderator and a right-hand man to Klaus Schwab, Kemp was complimented on his refusal to “give in” to the election integrity movement, after multiple contested races in his home state of Georgia resulted in the “election” of left-wing Democrats, most notably Joe Biden in 2020 and Senator Rafael Warnock in 2022.

After slamming Republican candidates as “election deniers,” the National File reports that Brende lauded Kemp’s inaction on the documented election fraud and irregularities that led to strong Democrat gains in Georgia.

“We know you well,” Brende told Kemp, before remarking that, during America’s recent elections, “a lot of candidates who were ‘election deniers’ were not elected.”

“You came under some pressure [to secure Georgia’s elections] but you didn’t really give in on that did you?” Brende asked.

Kemp responded with a nod, before shifting the conversation to the economy, and claiming that he believes that Democrats will join with Republicans in securing America’s southern border.

So there you have it, the three musketeers of anti-American values strutting their stuff on the main stage of the world’s most creepy globalist entity – Moulton, Manchin and Kemp. There were others, like Governors JB Pritzker of Illinois and Gretchen Whitmer of Michigan, but no America-first patriot expects anything from them.

The very perceptive political analyst Noor Bin Ladin has come up with a clever new name for globalist politicians who pander to Luciferian wealth and power. She calls them “ANO’s” – Americans in Name Only.

time to make the donuts!

Manchin has explained who is pimp has become. The people electing him are simply collateral chattel.

Maria is a Young Global Leader,too.

Yup. Robert Malone has a list on this page. Scroll down. These are US politicians. Not Elise Stefanik and Tom Cotton. I wouldn’t be surprised if Malone himself isn’t one of these as well, or something related. That doesn’t mean his information is bad, but it does mean there’s an agenda somewhere hidden in what he does. Just like with Patrick here. He wants to spar over semantics to an extent that makes no sense. If there’s a boot on your face, do you care what kind of shoelaces are being used? Unless you want to torture that metaphor into… Read more »

In Brazil we have a criminal president, Lula, leader of the forum of são paulo submission to the WEF.

U.S. Politicians Who Pimped America To The WEF/Davos Cult - All View News

[…] U.S. Politicians Who Pimped America To The WEF/Davos Cult […]

government misconduct in the news | vulture of critique

[…] U.S. Politicians Who Pimped America To The WEF/Davos Cult […]