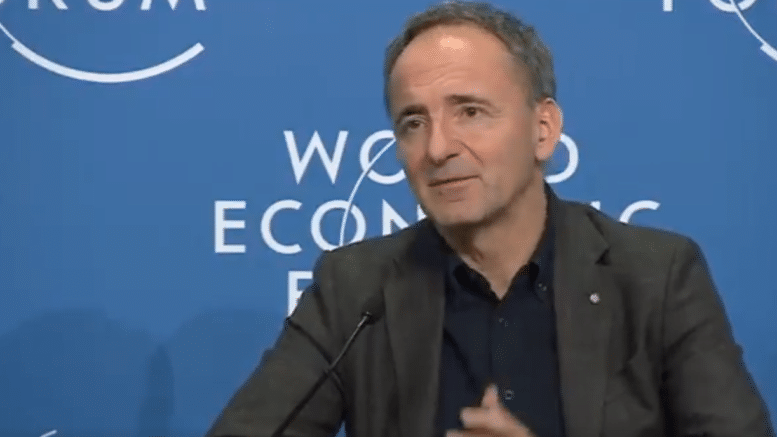 Please Share This Story!
PDF 📄
The giant tech company Siemens and its chairman are completely sold out to Technocracy and total control over humanity. Upending traditional agriculture makes way for artificial lab-grown protein and insect farms. Snabe can eat whatever he wants, but he has no business telling you what you should eat! ⁃ TN Editor

One billion people should stop eating meat in order to save the climate, the chairman of the largest industrial manufacturing company in Europe told a panel at the World Economic Forum.

Danish businessman and chairman of the German manufacturing giant Siemens, Jim Hagemann Snabe pushed the Great Reset agenda of replacing meat with synthetic proteins at a “Mobilizing for Climate” panel at the annual globalist meeting in Davos, Switzerland on Wednesday.

“If a billion people stop eating meat, I tell you, it has a big impact. Not only does it have a big impact on the current food system, but it will also inspire innovation of food systems,” Snabe said, adding: “I predict we will have proteins not coming from meat in the future, they will probably taste even better.”

“They will be zero carbon and much healthier than the kind of food we eat today, that is the mission we need to get on,” the Siemens boss continued.

The German multinational conglomerate has been a central figure in the so-far disastrous green agenda in the economic heart of Europe, which has left Germany vulnerable to the machinations of global politics, namely Russia’s war in Ukraine. However, the push towards an allegedly greener future has seen Siemens criticised for its alleged ties to the forced labour system in the Communist Chinese concentration camp region of Xinjiang, which is a leading producer of solar panel components.

Despite Seimens’ own sordid history of using forced labour during the reign of Adolf Hitler’s National Socialist Party, the current CEO of the company, Roland Busch, said last year that the EU should not pressure Beijing over forced labour as it might stall the progress of the green agenda.

.@Siemens Chairman Jim Hagemann Snabe at #wef23: "If a billion people stop eating meat, it will have a big impact … I predict we will have proteins that don't come from meat in the future, they will probably taste even better … They will be zero carbon and much healthier" pic.twitter.com/wno0Ar49hf

The World Economic Forum has also been at the forefront of the meat-free future movement, arguing that people should opt for more “climate beneficial foods” such as algae, seaweed and cacti.

The Klaus Schwab-founded organisation that pioneered the idea of a “Great Reset” of capitalism, has also promoted the idea of eating insect protein rather than meat to lessen the impact of supposedly man-made climate change.

It is questionable, however, how much impact a move away from meat would actually have on carbon emissions. Danish climate Bjørn Lomborg has previously noted that studies have shown that should the average person in the industrialised world cut out meat from their diet it would only result in an individual emissions reduction of 4.3 per cent.

Yet this is likely a generous estimate, Lomborg said, as other studies have shown that because vegetarian diets are cheaper, a “rebound effect” has been seen, meaning that vegetarian consumers use their cash savings on other products that also drive up carbon emissions, thereby mitigating most of the supposed benefits of a virtue-signalling vegetarian diet.

efing freaks!!!!! Seriously these DB’s are beyond crazy! Lets put them on the island of the kimodo dragons and they can redeam themselves by providing food for the dragons!!! Ha.. that would be justice!

What about the other 6 Billion people … who apparently will be eating normal meat …Schwab promotes eating bugs, which contain chitin, which is indigestible in humans. Jim Hagemann Snabe is another idiotic ideologue who comes up with simplistic and poorly thought out solutions to complex existential issues.

He looks as if he could benefit from eating some meat!!

Stupid is as stupid does

THEY cause 100% of environmental problems with their polluting factories, chemical plants, private jets, mansions and conspicuous consumption and exploitation of everything on the planet and you get to eat a bug for dinner. How long are humans going to tolerate these people dictating their lives?