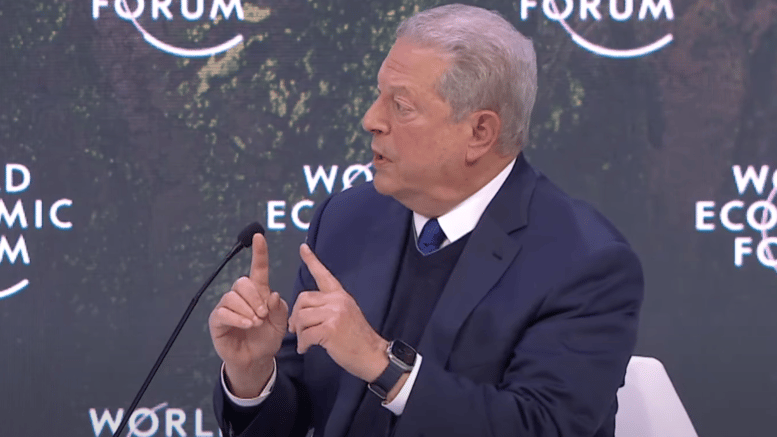 Please Share This Story!
PDF 📄
As a leading Technocrat spokesman for Sustainable Development, aka Technocracy, Al Gore is truly the inmate who desperately wants to take charge of the asylum. His insane rant is so far beyond the pale that only other Davos attendees could possibly nod in agreement.

These are the people who want to run the world? ⁃ TN Editor

Al Gore is testing out his performative Greta mode at the World Economic Forum in Davos this week. The former Vice President and Democratic presidential candidate who as early as the 1990’s was dubbed in the pages of The Washington Post as “very boring” and as having a “naturally stiff, wooden persona” momentarily (and very awkwardly) tried to go climate activist beast mode during a Q&A panel.

His attempt this week to pull off a “Greta moment” and shed his notorious stiffness resulted in an unhinged rant wherein he claimed that carbon emissions and greenhouses gases are trapping “as much extra heat as would be released by 600,000 Hiroshima class atomic bombs exploding every single day on the earth.”

That’s right, you heard him correctly… six-hundred-thousand Hiroshima bombs every single day – according to his bizarre rant, which he further said is “boiling the oceans” and creating “rain bombs” and “atmospheric rivers” resulting in millions of “climate refugees”.

“Climate refugees are expected to reach one billion in this century”… he said, before turning to the “xenophobia” somehow unleashed on the world in the process due to the “Hiroshima bombs”.

Next, Gore can perhaps stage his own arrest at a climate protest right alongside his hero.

Then maybe, just maybe, he’ll be relevant again – as he clearly so desperately wants.

Meanwhile, at a moment the Davos elites are busy fueling an actual war…

KERRY AND FRIENDS ARE “SAVING THE PLANET” WHILST AT THE SAME TIME DARING NUCLEAR ARMAGEDDON ###pic.twitter.com/3c3FDLYZyX

Algore’s rage is nothing an enema and a good strong laxative wouldn’t fix.

Only 600,000 Hiroshimas a day? And I thought it was a kazillion bazillion.

That’s better than Neil Kinnock’s claim his wife was the first in a 1,000 generation to go to University. (The bit even Biden had the sense not to copy) As a generation is usually considered 25 years, that would be 25,000 years ago during the last Ice age when much of Wales was covered with a mile depth of ice.

[…] Al Gore Schools Davos Attendees: Global Warming Is “Equivalent Of 600,000 Hiroshima Bombs Daily”As a leading Technocrat spokesman for Sustainable Development, aka Technocracy, Al Gore is truly the inmate who desperately wants to take charge of the asylum. His insane rant is so far beyond the pale that only other Davos attendees could possibly nod in agreement.These are the people who want to run the world? ⁃ TN Editor […]

Clearly Al Gore is an idiot, but he’s very good at convincing people that the global climate change hoax is real…………..and that made him very wealthy

He’s like minister Taro Kono in Japan, and he’s telling outright lies. Minister Taro Kono asserted that about 200 million doses were vaccinated in the United States in 2021, but not a single person died. https://www.city.hiroshima.lg.jp/soshiki/48/9402.html ﻿ The temperature at the point of the explosion exceeded 1 million degrees Celsius, and the fireball in the air reached a radius of over 200 meters in a second. The heat rays emitted from the fireball had a strong impact on the earth between 0.2 and 3 seconds after the explosion, and the temperature of the earth’s surface around the center of the… Read more »

If the oceans are boiling (and levels rising), why are these billionaires still buying oceanfront property? Why are banks still giving out mortgages for those purchasing oceanfront beach houses and condos? I’m old enough to remember these same scare tactics from back in the 70’s and 80’s. Wake up folks, it’s simply one huge scam and paying your carbon taxes doesn’t magically make C02 disappear.

Take a look at this Ramsar stuff too.. .”Wetland City Accreditation” my town’s Ron Kelly Spurles tourism manager made sure that our little university town got the accreditation – the only one so far in North America… they seem to be celebrating but I’m so sure this is a great thing to boast about… New tab (ramsar.org)

I suppose good ol’ Al doesn’t know any real scientists ’cause he’s so full of hot air himself he’s floating out in looney land ‘above it all’. What a load of C-R-A-P he spews. Forget him. Not worth the breath and never was.