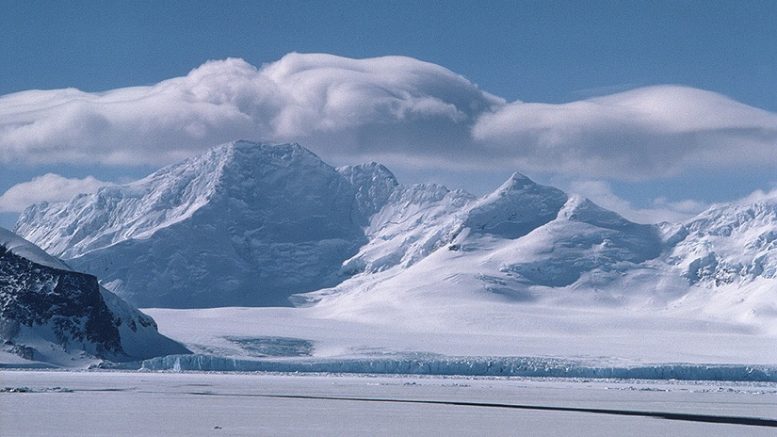 Scientists cannot explain why the ice is getting thicker, stronger and colder, but they are sure that global warming will soon overcome the trend. This underscores the religious nature of the Technocrat mind. ⁃ TN Editor

Antarctic sea ice has grown to a record large extent for a second straight year, baffling scientists seeking to understand why this ice is expanding rather than shrinking in a warming world.

The increasing ice is especially perplexing since the water beneath the ice has warmed, not cooled.

“The overwhelming evidence is that the Southern Ocean is warming,” said Jinlun Zhang, a University of Washington scientist, studying Antarctic ice. “Why would sea ice be increasing? Although the rate of increase is small, it is a puzzle to scientists.”

In a new study in the Journal of Climate, Zhang finds both strengthening and converging winds around the South Pole can explain 80 percent of the increase in ice volume which has been observed.

“The polar vortex that swirls around the South Pole is not just stronger than it was when satellite records began in the 1970s, it has more convergence, meaning it shoves the sea ice together to cause ridging,” the study’s press release explains. “Stronger winds also drive ice faster, which leads to still more deformation and ridging. This creates thicker, longer-lasting ice, while exposing surrounding water and thin ice to the blistering cold winds that cause more ice growth.”

But no one seems to have a conclusive answer as to why winds are behaving this way.

“I haven’t seen a clear explanation yet of why the winds have gotten stronger,” Zhang told Michael Lemonick of Climate Central.

Wow, what an utter distortion of the Washington Post article that you cite as your source. The article, as anyone who bothers to click the link will soon find out, has this as its headline “Antarctic sea ice levels have shrunk to record low levels for late June” It’s an update of an article from 2013, and it’s those 2013 figures that you are misrepresenting as being the current year’s figures. The article begins with this paragraph “The late June sea ice surrounding the Antarctic continent is at its lowest level in nearly 40 years of records, according to data… Read more »

You will notice that they changed their headline and story several days AFTER TN posted the original headline. Are we to be clairvoyant? Nevertheless, you point out the obvious: the story headline and conclusion was significantly modified after the writer took enough heat from global warming zealots. Otherwise, it is what it is – their story; get over it already.