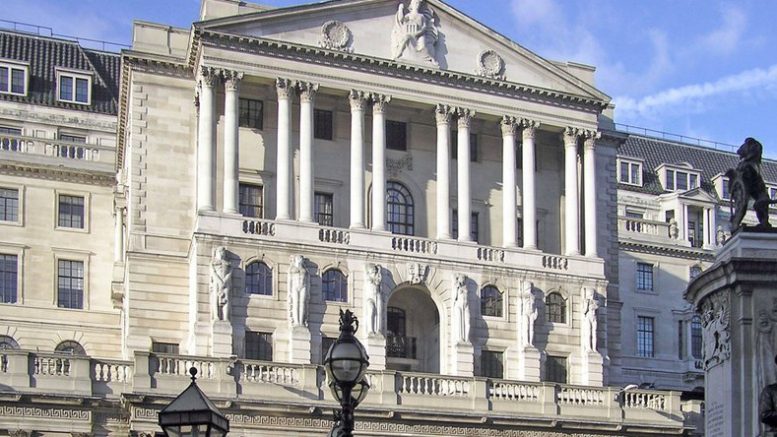 Please Share This Story!
PDF 📄
The Bank of England is the most powerful Central Bank in the world, other than the Federal Reserve in the U.S. BOE is driving toward Digital Currency (CBDC) and the latest target date is 2025. BOE’s partnership with Accenture is a Technocrat marriage made in Hades. ⁃ TN Editor

Last week it was announced by the Bank of England that they had appointed Accenture, a professional services company, as their ‘Technology Delivery Partner‘ for the renewal of the UK’s Real Time Gross Settlement (RTGS) payment system. The news was in keeping with the BOE’s timeline of deciding upon a tech partner by the summer of 2020.

Before looking at the wider implications of Accenture’s partnership with the bank, it is worthwhile noting a couple of things about the company.

First, aside from their new found relationship with the BOE, Accenture is a Strategic Partner of the World Economic Forum and has been for twenty years. This is the same WEF that is pushing vociferously the concept of a ‘Great Reset‘ in the areas of the economy, society, geopolitics, the environment and technology.

Second, Accenture provide R3 with IT solutions. R3 are an ‘enterprise blockchain software firm‘ that run a distributed ledger based platform called ‘Corda‘. This is relevant because in 2018, R3 were among several other institutions that took part in a BOE led ‘RTGS Renewal Programme Proof of Concept‘. The point of the concept was to see if the systems of R3 and their counterparts could connect to the renewed RTGS. The end result showed that they could.

Commenting on Accenture’s partnership with the BOE, Victoria Cleland (Executive Director of Banking, Payments and Innovation) said that it represented ‘a key milestone in our ambitious and exciting Programme to renew RTGS.’ Stressing that the RTGS Renewal Programme is a key priority of the BOE, Cleland added that ‘the renewed RTGS service will be designed not only to benefit everyone in the country who makes payments, but to keep the UK at the leading edge of payments innovation.’

Sulabh Agarwal, a managing director at Accenture, said that ‘the renewed system will enable financial institutions to access a more modern and secure payments platform which is fit for the future.’

The objective as laid out in the press release states that the new RTGS will start to be delivered in 2022. This is confirmed by way of a ‘RTGS Renewal Programme plan‘ published by the bank a short while ago. There are several stages of transition planned until the renewed services come online between 2023 and 2024. The programme will close in 2025 with the renewed RTGS fully operational.

The subject of RTGS is one I have regularly posted about since 2018. If you are not familiar with the background to RTGS, I would recommend looking into some of the key aspects.

Of most concern to me is the potential interplay between the renewed RTGS and the future issuance of a BOE Central Bank Digital Currency. A couple of new bits of information I came across recently lend credence to this possibility.

The first is from June 2019 when the BOE discussed the ‘latest thinking on using APIs to enhance how users interact with the renewed Real-Time Gross Settlement (RTGS) Service‘. API stands for ‘Application Programming Interface‘, and is described by the bank as ‘a set of functions and procedures allowing the creation of applications that access the functions or data of an operating system.’

The reason I bring this up is because back in March 2020 when the BOE released a 57 page discussion paper titled, ‘Central Bank Digital Currency – Opportunities, challenges and design‘, they spoke about API in conjunction with ‘Payment Service Providers‘ for a CBDC. Here is an extract from an article I published on the paper in May 2020:

To access CBDC, customers would need to register with a provider. However, this would come with certain conditions. The identity of users would need to be authenticated, both to open an account and to make payments, in the name of protecting them against fraud and stamping out money laundering. Rights to anonymity would have to be waived.

As for how CBDC payments would be processed, the BOE mention that transactions between users of the same provider could go through their own systems and would not need to be ratified by the bank’s core ledger. But CBDC payments between two different providers – say Barclays and Santander – would need to go through the ledger, and by extension the BOE.

Connected to ‘Payment Interface Providers‘ is something called the ‘Application Programming Interface‘ (API). It is this that would permit private sector providers to connect to the BOE’s core ledger. Any unauthorised access would be automatically blocked, as only regulated firms would be granted entry.

In short, API would stand between ‘Payment Interface Providers‘ as a wall of security in a CBDC system. The fact that API is being discussed as part of the renewed RTGS, as well as a future CBDC, is an indication of its relevance.

The second bit of information comes from a meeting held on June 2nd 2020 by the External Advisory Body of the RTGS Renewal Programme. Participants on this body include Barclays and Lloyds Banking Group. As well as discussing the latest updates on renewed RTGS, the last item of the meeting was dedicated to Central Bank Digital Currency and minuted as follows:

An update was provided on the Bank of England’s work on Central Bank Digital Currency (CBDC), with a particular focus on the discussion paper, published in March 2020. It was explained that the Bank had taken no decision to issue a CBDC. The paper aimed to serve as a basis for holding discussions on the way in which a domestic CBDC could potentially play a useful role in delivering the Bank’s objectives.

CBDC was being explored further with other Central Banks. A key consideration was whether the public would choose to use a CBDC and what the impact would be on financial and monetary stability.

To further underline the importance of the discussion paper referenced in the minutes, it was this paper that mentioned how the bank’s work on a CBDC would help them to ‘understand whether CBDC could interact with RTGS renewal‘. In my series of articles examining the paper, I drew attention to the BOE’s belief that the core ledger at the heart of the new RTGS ‘could build on our ambitious renewal of the RTGS service and complement private sector initiatives to improve payments‘.

I would argue that what we are seeing here is how the redevelopment of the BOE’s payment system is fundamental in the quest to issue CBDC. If that is the case, then the timeline for RTGS renewal provides some indication of when the bank may attempt to introduce a CBDC.

Take into consideration at this point the Bank for International Settlement’s ‘Innovation BIS 2025‘ project, in which the technology behind digital currency plays an integral part. The completion of the renewed RTGS is slated for 2025, and around this time also the Federal Reserve is planning to launch a new payment system called ‘FedNow‘.

The BIS have not discussed why the year 2025 seems to hold such importance. All we know for definite is that five years from now central banks should have in place new payment system that are compatible with blockchain and distributed ledger technology, which in itself would lay the foundations for realising a CBDC.

If global planners keep to their timelines, by 2025 central bank digital currency will have begun rolling out in the West. Meanwhile, in the East China are pushing on with their own roll out of a CBDC. As reported back in June, trials have already started in four cities across the country. But a much bigger roll out looks to be on the cards by the time of the Beijing Winter Olympics in 2022. Right when the renewed RTGS begins to come online.

In the UK, the Bank of England’s publicly stated position is that any CBDC would  ‘likely act as a complement to cash rather than a substitute‘. I would treat this with the upmost caution, simply because it is in contrast to BIS General Manager Agustin Carstens who is on the record as saying that in a CBDC world all payments would be electronic only. To quote him directly, ‘He or she would no longer have the option of paying cash‘.

As I see it, the objective of the banking elites is to implement a global CBDC network as a mechanism for the gradual elimination of cash. Physical money took a battering earlier this year as countries were placed into lockdown. Cash levels are starting to recover in the UK, but remain well below where they were in 2019. Another round of widespread lockdowns amidst a resurgence of the pandemic would further erode the confidence people have in handling banknotes.

Whereas ATM transaction volume in Britain was 50.9 million a year ago, today it is 32.8 million. It is not difficult to imagine levels dropping back to where they were in April – 20.5 million – or worse if the autumn/winter season brings with it the much vaunted ‘second wave‘.

One thing I am particularly concerned about are reports of a very recent ‘war game‘ session between Prime Minister Boris Johnson and Chancellor Rishi Sunak, where apparently it was discussed that those over 50 may soon be ordered to stay at home to avoid another national lockdown. It is people over 50 that are more likely to be the ones who persist in using cash as payment. Restrict them to the point where they are effectively housebound out of fear, and you can see how the cash network would be impacted.

As the world continues to be enveloped by Covid-19 hysteria, behind the scenes central banks are quietly progressing on two fronts – the renewal of payment systems and plans for the issuance of central bank digital currency. Both of which appear to go hand in hand.