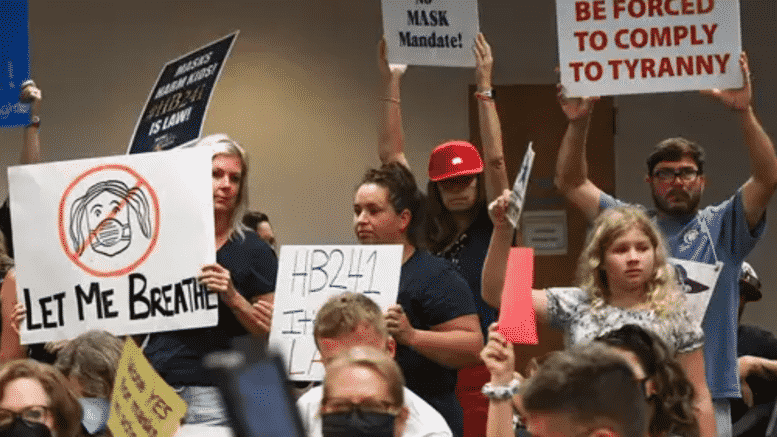 Please Share This Story!
PDF 📄
Just one day after the NSBA ask for federal law enforcement protection against parents who are angry with school boards over mask and vaccine mandates, the DOJ agrees to “protect”. This is a blatant and coordinated effort to silence free speech and political opposition of dissenting parents.

The NSBA is not a government organization! Rather it is a non-profit private-sector NGO, and yet it is instrument that is weaponizing the federal government against citizens. The NSBA website is very clear that:

NSBA is a not-for-profit organization. The public policy agenda is determined by a Delegate Assembly made up of local school board members who represent their state associations of school boards. The Board of Directors translates this policy into action.

Furthermore, its website shows how it gets things done through a swarm of other NGOs:

What gives these unelected and unaccountable Technocrats the right to meddle in national education or law enforcement policies? Absolutely nothing.

Parents should demand that their local school board immediately resign their membership from the NSBA and stop spending money to support these hijackers of education. ⁃ TN Editor

One day after a North Carolina school board adopted a policy that would discipline or dismiss teachers if they incorporate critical race theory (CRT) into their teaching of the history of the United States, The Epoch Times’ Ivan Pentchoukov reports that Attorney General Merrick Garland on Oct. 4 announced a concentrated effort to target any threats of violence, intimidation, and harassment by parents toward school personnel.

The announcement also comes days after a national association of school boards asked the Biden administration to take “extraordinary measures” to prevent alleged threats against school staff that the association said was coming from parents who oppose mask mandates and the teaching of critical race theory.

Garland directed the FBI and U.S. attorneys in the next 30 days to convene meetings with federal, state, and local leaders within 30 days to “facilitate the discussion of strategies for addressing threats against school administrators, board members, teachers, and staff,” according to a letter (pdf) the attorney general sent on Monday to all U.S. attorneys, the FBI director, the director of the Executive Office of U.S. Attorneys, and the assistant attorney general of the DOJ’s criminal division.

According to the DOJ, further efforts will be rolled out in the coming days, including a task force that will determine how to use federal resources to prosecute offending parents as well as how to advise state entities on prosecutions in cases where no federal law is broken. The Justice Department will also provide training to school staff on how to report threats from parents and preserve evidence to aid in investigation and prosecution.

“In recent months, there has been a disturbing spike in harassment, intimidation, and threats of violence against school administrators, board members, teachers, and staff who participate in the vital work of running our nation’s public schools,” Garland wrote.

“While spirited debate about policy matters is protected under our Constitution, that protection does not extend to threats of violence or efforts to intimidate individuals based on their views.”

School boards across the nation have increasingly become an arena for heated debate over culture, politics, and health. Parents groups have ramped up pressure on boards over the teaching of critical race theory and the imposition of mask mandates. The debate is split sharply along political lines, with Democrats largely in favor of critical race theory and mask mandates, and Republicans opposing both.

The amount and severity of the threats against officials are not known, but Garland’s letter suggests the phenomenon is widespread.

In recent months, there has been a disturbing spike in harassment, intimidation, and threats of violence against school administrators, board members, teachers, and staff who participate in the vital work of running our nation’s public schools. While spirited debate about policy matters is protected under our Constitution, that protection does not extend to threats of violence or efforts to intimidate individuals based on their views.

[ZH: But intimidating parents who dare to have the view that the nation’s founding fathers and the founding documents are not in fact systemically racist and does not want their children taught that is the case is ok?]

Threats against public servants are not only illegal, they run counter to our nation’s core values. Those who dedicate their time and energy to ensuring that our children receive a proper education in a safe environment deserve to he able to do their work without fear for their safety.

[ZH: “Dedication” to a “proper education” is admirable; indoctrination in Marxism is not]

The Department takes these incidents seriously and is committed to using its authority and resources to discourage these threats, identify them when they occur, and prosecute them when appropriate. In the coming days, the Department will announce a series of measures designed to address the rise in criminal conduct directed toward school personnel.

[ZH: What exactly is the crime?]

Coordination and partnership with local law enforcement is critical to implementing these measures for the benefit of our nation’s nearly 14,000 public school districts. To this end, I am  directing the Federal Bureau of Investigation, working with each United States Attorney, to convene meetings with federal, state, local, Tribal, and territorial leaders in each federal judicial district within 30 days of the issuance of this memorandum. These meetings will facilitate the discussion of strategies for addressing threats against school administrators, board members, teachers, and staff, and will open dedicated lines of communication for threat reporting, assessment, and response.

[ZH: We wonder how many local law enforcement officials, while busily watching for vaccine passport offenders, and mask-mandate refusers, will acquiesce to enforcing these new laws to protect the very people who are preaching that America’s systemic racism starts with the men (and women) in blue?]

The Department is steadfast in its commitment to protect all people in the United States from violence, threats of violence, and other forms of intimidation and harassment.

[ZH: Presumably intimidation and emotional harassment of young white boys and girls for their ‘whiteness’, privilege, and systemic racism is beyond that ‘protection’?]

Rufo goes on to note that:

“Neither the Attorney General’s memo nor the full Justice Department press release cites any significant, credible threat. This is a blatant suppression tactic, designed to dissuade citizens from participating in the democratic process at school boards.“

Awesome!! Yet, something ELSE, that will completely BACKFIRE on the Psychopathic LibTards. Now, even MORE will WAKE UP!! Keep the ‘hits’ coming, LibTards!! You’re waking people up SO much faster than Alex Jones (et al) EVER did! lolololol

“…Garland’s letter suggests the phenomenon is widespread.” This is the key sentence. IF and I do mean IF there is any credibility to the statement it means the NORMIES are waking up! Good for them! Do not be bullied by the Biden Administration’s NGO lynch men. They have NO authority and NO law behind them. Remove your child from public facilities and home school. In OK, home schooling has risen over the last year by leaps and bounds. Smart people began removing their children early on in 2020. If you cannot, for whatever reason, then FIGHT!!!! YOU have the power,… Read more »