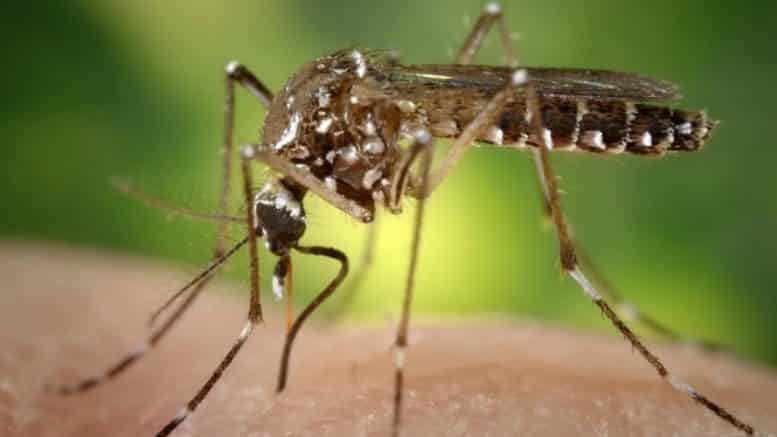 Please Share This Story!
PDF 📄
The total takeover of all genetic material on earth will spawn projects like this, to use weaponize nature against humans to control human health. This will fit well with Biden’s new Executive Order, National Biotechnology and Biomanufacturing Initiative,  that institutionalizes research and development of genetic modification across all branches of government and with billions in grants. ⁃ TN Editor

A box full of genetically modified mosquitoes successfully vaccinated a human against malaria in a trial funded by the National Institutes of Health (NIH).

The study involved about 200 hungry mosquitos biting a human subject’s arm. Human participants placed their arms directly over a small box full of the bloodsuckers.

“We use the mosquitoes like they’re 1,000 small flying syringes,” said researcher Dr. Sean Murphy, as reported by NPR.

The mosquitoes gave minor versions of malaria that didn’t make people sick, but gave them antibodies. Efficacy from the antibodies lasted a few months.

“Half of the individuals in each vaccine group did not develop detectable P. falciparum infection, and a subset of these individuals was subjected to a second CHMI 6 months later and remained partially protected. These results support further development of genetically attenuated sporozoites as potential malaria vaccines,” researchers concluded.

Carolina Reid was one of twenty-six participants in the study.

“My whole forearm swelled and blistered. My family was laughing, asking like, ‘why are you subjecting yourself to this?’”

Reid enjoyed her experience so much that she says she wants to participate in as many vaccine trials as she can. For this research, each participant received $4,100 as an incentive.

Adverse reactions were what one would expect after getting bit by hundreds of mosquitos and nothing more.

Lyke led the phase 1 trials for Pfizer’s COVID-19 vaccine and was a co-investigator for Moderna and Novavax COVID vaccines.

Researchers say the genetically modified mosquitoes will not be used at large to vaccinate millions of people. The reason why mosquitos were used instead of syringes, they claim, was to save costs.

“He and his colleagues went this route because it is costly and time consuming to develop a formulation of a parasite that can be delivered with a needle,” NPR report

I provide architectural doors and hardware for a living. About two years ago, I worked on a project in central NY state for a university hospital project called, “Institute for Climate & Health.” This project was unusual in that the doors and all the hardware were white. During a conference call with the architect I picked up on the idea that this was to provide high contrast with the small bugs that they would be working with inside the lab. We began calling it “Wuhan West.” Everyone laughed, but you could also tell that they were, at least, mildly concerned.… Read more »

I REALLY wish someone would as Gov DeSantis WHY HE HAS ALLOWED, that PSYCHOPATH (EVIL Bill Gates), to RELEASE these BIO-WEAPON’D mosquitos WITHIN that state of FLORIDA!?!?!?!?!?! Pretty sure that there are LAWS, in EVERY STATE, pertaining to BIO-WEAPONS?? (and Chemical Weapons)

It’s one thing to provoke antibodies, but quite another to foresee the effect such techniques may have on the immune system of the person injected. As we’re seeing with Covid vaccines, the specificity of the vaccine can render the all-purpose learned natural immunity of the individual null and void – as well as making the person vulnerable in the future’. This is because vaccines cannot deliver the wide-ranging protections which occur when the body is allowed to produce its own responses to infections.

So you could get a hundred experimental vaccines a day

Liars. This is how they plan to depopulate the pure bloods. You don’t really think they are going to let a couple billion people escape the “covid” jab now do you?

Niceeee… (sarcasm)
Now, let’s see the consequences on the whole animal Kingdom (that includes human mammals) as it propagates. (Reminds me of GMO crop that propagate & invade all land around, forcing GMO over “organic” growing lands.)

Even other unmodified mosquitos might get contaminated (by contact with an animal that has been “vaxxed”) and retransmit that vax.

Some heads need to roll for these level of irresponsibility.