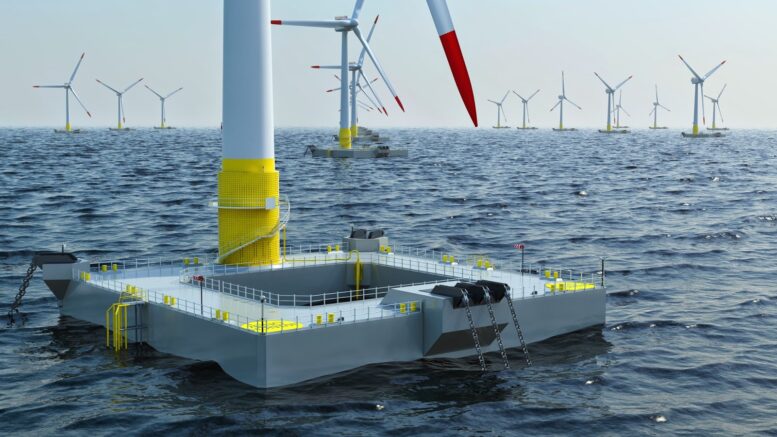 Please Share This Story!
PDF 📄
Do we really want giant wind turbines floating all around the continental coastline as well as Hawaii? Turbines currently have a useable lifespan of 20 years and then must be replaced, but the time to achieve a net overall return is 22 years. Do you see the problem here? Then there is the vast ecological damage that will be done to the oceans with high-frequency vibration.  ⁃ TN Editor

The U.S. is making plans to boost its wind production to compete with other major players and become an international hub for the renewable energy source. The United States might be moving late, compared to major wind markets in Europe, but Biden is rapidly changing the face of the country’s wind energy sector, offering it the potential for rapid, widescale growth.  President Biden believes the U.S. could swiftly grow its wind power to rival that of Europe and Asia, which have both already established strong wind energy sectors over the past few decades. The government is now aiming for 15GW of floating offshore wind capacity by 2035. The White House recently released a statement saying, “The Biden-Harris Administration is launching coordinated actions to develop new floating offshore wind platforms, an emerging clean energy technology that will help the United States lead on offshore wind.”

This new aim builds upon Biden’s existing target of 30 GW of offshore wind capacity by 2030, mainly coming from fixed-bottom installations. The government expects 15 GW could power over 5 million homes with clean energy. By investing heavily in the rollout of floating wind installations, the cost of the technology is expected to be reduced by around 70 percent by 2035, to $45 per megawatt-hour.

The floating wind turbine technology means that the installations can be installed in deeper water than the fixed-bottom versions. This would expand America’s wind potential by allowing energy companies to access wind resources in untapped waters. The Department of Energy (DoE) believes there are around 4.3 terawatts (4,300GW) of potential wind energy off the U.S. coastline, with only 1.5 terawatts available in areas where fixed-bottom turbines could be constructed.

While the U.S. is fairly new to the offshore wind game, in November 2021 ground was officially broken on the country’s “first commercial-scale offshore wind farm”, showing the potential for rapid growth in the sector. Annual electricity in consumption in the U.S. stands at around 3.9 trillion kilowatt-hours, meaning that the country’s wind energy potential could go a long way to meeting this demand.

In addition to the announcement of ambitious wind energy targets, Biden also rolled out his Bipartisan Infrastructure Law, which strongly supports the growth of America’s wind energy capacity. He also suggested the DoE will soon be offering around $50 million in research, development, and demonstration funding. Some investment will be available as a prize for a company that can optimize floating wind platform technologies, while $31 million in funding will be given to the ATLANTIS program to help develop the installations.

By developing wind farms along most of the West Coast, Hawaii, and the Great Lakes, as well as part of the East Coast, the U.S. could soon become a wind energy hub, growing its capacity to compete against major international players in Europe and Asia. But much of this development will rely on improving the regulatory environment and reducing costs for wind turbine operations.

The DoE introduced the ‘SunShot’ program around a decade ago to tackle high solar PV costs, quickly finding that most of the expenses were related to permitting costs, support hardware like inverters, and adapting the grid to respond to intermittent power. While wind turbines are expensive to produce, addressing other regulatory and related challenges could support the rapid development of America’s wind energy sector.

In addition to supporting the growth of the renewable energy sector, the IRA will also offer funding and tax incentives to boost the country’s manufacturing industry. To move away from its reliance on major manufacturing sources, such as China, the Biden Administration hopes to encourage the development of manufacturing industries that support this green energy transition. Within the coming decades, the U.S. will likely produce many of the solar panels, wind turbines, and batteries it requires to support its green revolution.

Energy experts were shocked to see how far-reaching America’s first climate bill appears to be. Robbie Orvis, a senior director of analysis at Energy Innovation, stated: “this bill is going to make it very cheap to create clean electricity – you are going to get an incredible amount of deployment of solar and wind.” He added, “It will really unleash investment in renewables. It has all the incentives to grow the industry domestically. It’s a complete jump-start for renewables.”

As the U.S. launches several new policies and targets in support of the rapid transition to green energy, energy firms across the country are preparing to roll out major wind and solar power projects, among other innovative renewable energy ideas. While the U.S. may have fallen behind other major world powers in its renewable energy development in recent years, this drive for rapid expansion could see it quickly rival some of the major international players.

The Gulf of Mexico would be a good place to put a few, the 150mph winds from Ian would make some great power supply.

“Biden Chases Windmills To Power America”
Gee, I hope one of those propeller blades doesn’t hit him in the head and split his empty skull right in half! (wink, wink, nod, nod.)

Put them on Martha’s vineyard