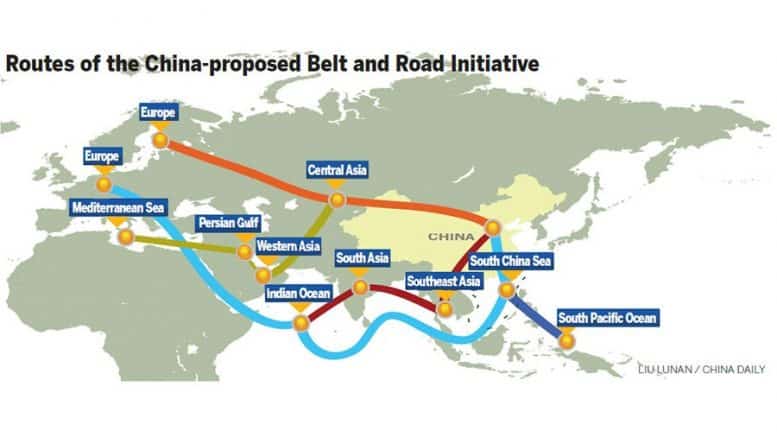 As a full-fledged Technocracy, China’s Technocrat leaders have no interest in helping the poor in their country or anywhere else in the world. They do intend to lead in so-called ‘Fintech’ that will complete massive infrastructure projects. ⁃ TN Editor

The China-led Asian Infrastructure Investment Bank (AIIB) is reshaping the landscape of development finance, UNCTAD economist Daniel Poon has told a seminar on South-South cooperation run by Africa 21, a Geneva-based think tank that has observer status with the UN trade body.

Opened for business in January 2016, the bank’s approach to mobilizing capital for infrastructure projects offers an innovative alternative financing model for developing countries, who need to invest an additional $1 trillion or so each year in the ports, roads and power grids required to lift billions out of poverty by 2030, the finish line for the UN-endorsed Sustainable Development Goals.

“There’s a lot of hype out there about China’s new development banks, and I hope this discussion can shed some light one what’s actually happening,” Mr. Poon said at the Africa 21 event, held in Geneva on 15 February, adding that the AIIB’s start-up phase has not been covered well in the media, much less some of the institution’s finer details. The same can be said about China’s other initiative, the New Development Bank, launched in July 2015.

“I think that from the African context, it’s important to know what changes are happening in the international system, particularly related to new development banks, and the opportunities that may arise from them,” he said.

With traditional donor countries cutting foreign aid, financial institutions such as the World Bank will need to step up, Mr. Poon underlined. But the ability of existing development banks to bridge the financing gap is limited by their low statutory lending capacities.

“Because these banks have to go to the international capital markets to raise money, they have to maintain a triple-A rating in order to reassure investors to buy their bonds.”

“This leads them to adopt a relatively conservative approach to their lending,” he said, adding that typical loan-to-equity gearing ratios for these existing banks range between 2:1 and 5:1, meaning that for every dollar of equity they can lend between $2 and $5.

The strategy is understandable, the UNCTAD economist said, but the question is whether more can be done to raise gearing ratios without scaring off bond investors. By comparison, private banks tend to have gearing ratios in the double digits – albeit with more commercially-driven loan portfolio profiles.

Ramping up finance seems feasible, however, since there is no apparent regulator for international development banks. The overly cautious policies, he said, stem from the predominant role of the World Bank, whose statutory gearing ratio until recent years was 1:1.

What’s required is the willingness to innovate and break away from the pack. And according to Mr. Poon, although it’s still early for the AIIB, certain institutional features of the bank could allow it to strike a better balance between the desire for high safeguards and the need to increase lending capacity, including the speed and size of loan dispersions.

These rough estimates showed that, in general, national development banks’ ratios are more progressive, with the China Development Bank topping the chart at 11:1 (for more than $1 trillion in outstanding loans in 2015). Among multilateral development banks, the European Investment Bank had the highest ratio of 5:1.

The burning question is whether the experimentation happening at the domestic level in China can be moved up to the multilateral level.

“One way of doing this could be through what the AIIB’s articles of agreement call the special fund mechanism,” Mr. Poon said.

“This generally has not been mentioned in the news media or in other policy analyses, but these two types of funds can contribute to the same project,” he said, adding that risks are held separately.

“If there are any losses, they don’t affect the equity of the bank, but rather the equity arrangements of the special funds.”

This arrangement gives the AIIB greater flexibility, allowing it to scale up loans for infrastructure projects while respecting the 2.5:1 gearing ratio limit set by its articles of operation.

“The bank is trying to maintain this conservative ratio to be able to issue bonds on international markets. But at the same time, it has created this conduit through the special funds mechanism to scale up that investment by also indirectly tapping domestic capital markets.”

In recent years, China has established a range of national, regional and bilateral investment funds, such as the China-Africa Development Fund and the Silk Road Fund, which could potentially inject additional capital into AIIB projects through the special funds mechanism.

“The combined target fund size of these entities is about $100 billion,” Mr. Poon said. “Now that isn’t to say that all the funds will go to the AIIB, but perhaps portions of it will, which will allow the bank to scale up operations beyond what some would expect.”

The main message of China’s experience, according to the UNCTAD economist, is that political leadership and innovative ideas, not financial resources per se, are what’s needed to improve how banks finance development projects.

While the extent of AIIB’s lending operations remain to be seen, China’s inclination to experiment with multilateral development bank institutional features is clear.

As the world moves to implement the ambitious 2030 Agenda for Sustainable Development – of which the 17 Sustainable Development Goals are the core – existing multilateral development banks, controlled by leading advanced economies, will face mounting pressure to adapt their lending operations and bolster the resources available for infrastructure financing.

Otherwise, they risk losing their leading position in the international development arena.

Mr. Poon’s presentation was based on the paper Scaling up Finance for the Sustainable Development Goals: Experimenting with Models of Multilateral Development Banking, prepared with fellow economist Ricardo Gottschalk for UNCTAD’s first meeting of the intergovernmental group of experts on financing for development, held last November in Geneva.

[…] As a full-fledged Technocracy, China’s Technocrat leaders have no interest in helping the poor in their country or anywhere else in the world. They do intend to lead in so-called ‘Fintech’ that will complete massive infrastructure projects. ( read original story …) […]

US dead on arrival, sold to bankers, banks are corporations and so is the US. Federalists sold out to mostly foreign investors in England and France. US created the Bolsheviks (USSR) through Schiff and Wilson WH. Also created Red China through Rockefeller and Skull & Bones (Masonic entity – Jewish from Septuagint, Talmud and Kabbalah). International rule of law at Israel Supreme Court (Talmudic and the reason why Bush passed the Noahide laws (Bush Crypto-Jew since Solomon Bush)). NWO capital is Astana, Kazakstan. Putin, son of Cheka. Rome crushed, Protestantism is completely Judah-ized leaving very few Christian faiths which US… Read more »