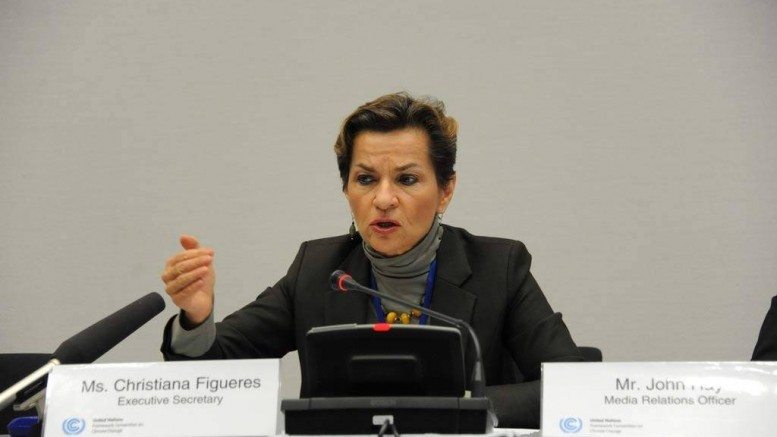 TN Note: Globalists at the UN are apparently on the defensive as the populist movement gains momentum. With Britain leaving the EU, many agreements are up in the air. Figueres notes that the U.N.’s Climate pact may require ‘renegotiation.’ On a greater scale, the entire Trans-Atlantic Trade and Investment Partnership (TTIP) will never see the light of day in its present form.

Christiana Figueres, one of the architects of the historic deal struck last December to limit warming to no more than two degrees above pre-industrial levels, said the international pact, “would require recalibration”.  It is currently in the process of ratification.

“In principle, it is actually, historically, we say, as humankind, we are moving towards larger and larger tents of collaboration […] rather than in the opposite way.”

The Brits vote on whether to Leave or Remain in the EU tomorrow, with the results expected in the early hours of Friday morning (24 June). Polls suggest the result is on a knife-edge.

Figueres was alongside Energy Union Commissioner Maroš Šefčovič and business magnate Michael Bloomberg, who is also UN special envoy for cities and climate change, to launch the Global Covenant of Mayors.

The Covenant is the merger of the EU’s Global Covenant of Mayors and the US Compact of Mayors, two initiatives driving forward climate action at city level.

Bloomberg said, “From America’s point of view, the UK staying (in) the EU is a very positive thing for the world economy and world peace. We have a special relationship with the UK that comes out of a common heritage. I think we would be much worse off if they chose to leave.

“A lot of the fears are fears that are coming out of technology hurting the labour force, not globalisation. We would be better off if the countries were closer together when it comes to solving some of those problems rather than further apart.”

The former New York mayor said that the possible loss of freedom of movement within the EU could affect the staff at his news agency Bloomberg.

He said, “My company has maybe 4,000 people in the UK, of which 1,100 or 1,200 are from the rest of Europe. It might be more difficult – who knows what the rules will be there. It’s clear it may be a little more difficult when it comes to moving back and forth.”

Patrick Klugman is the deputy mayor of Paris. He said that despite talk of rivalry between his city and London, “Paris is a city that supports Britain’s place in the EU.”

He added that Paris would stand in solidarity with other European cities mourning last week’s tragic murder of MP Jo Cox during the referendum campaign.

Brexit is unlikely to hit British collaboration in the Covenant, as it involves local authorities acting independently of national government, often going further on green policies than them.

However, many in the leadership of the Leave campaign – frontrunners to succeed Prime Minister David Cameron if he is toppled by a Brexit vote – are climate sceptics.