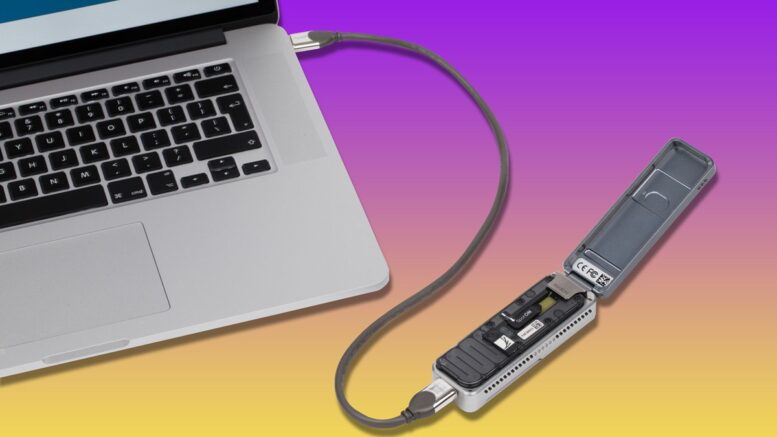 The MinION (Courtesy of Oxford Nanopore)

Please Share This Story!
PDF 📄
By the end of 2021, governments and industry will possess handheld DNA sequencers to instantly couple your DNA to a digital passport such as Commonpass. This is the holy grail of Technocracy and will rapidly usher in its Scientific Dictatorship.

This technology and how it will be used to dominate mankind is far above the head of most people, but we don’t have long before we see it in person… and then it will become clear. Aside from using  it for COVID-19 identification, it will become standard fare for all points of  government registration, such as driver’s licenses, business licenses, transportation, etc. ⁃ TN Editor

Imagine standing at a TSA security checkpoint on your way home for the holidays. You’re getting ready to go through the awkward travel procedures instituted almost immediately after 9/11 when the Transportation and Security Administration (TSA) was created and air travel in the United States morphed into a search and seizure operation with the implied possibility of your detention and interrogation.

The initial outrage such expressions of implicit state violence caused early on eventually gave way to begrudging acceptance. But now, a new layer of “security,” that could restrict freedom of movement even further, is being rolled out at several ports of entry in partnership with health technology industry leaders, academic institutions, and government health entities in more than three dozen countries.

A new digital certificate called CommonPass, designed to serve as a clearance mechanism for passengers based on a health diagnosis underwent its first transatlantic test on October 21 under the watchful eye of the Centers for Disease Control (CDC) and U.S. Customs and Border Protection (CBP) at Heathrow Airport in London. There, a group of select participants embarked on United flight 15 to Newark, New Jersey after being screened and tested for COVID-19 at the point of departure in a largely ceremonial exercise that included initiative co-founders, Paul Meyer and Bradley Perkins.

The app’s first trial run took place with much less media fanfare last month on a Cathay Pacific Airways flight from Hong Kong to Singapore and marked the beginning of the CommonPass pilot project launched by The Commons Project non-profit organization in-tandem with the World Economic Forum.

Travel industry insiders claim that CommonPass will allow international travel to resume before a COVID-19 vaccine is made widely available by applying standard methods for certification of lab results and vaccination records of travelers through the CommonPass Framework, based on criteria set by the governments of each port of entry.

J.D. O’Hara, CEO of one of the world’s largest travel services companies and one of the participants at Wednesday’s CommonPass trial run, hailed the app’s ability to “verify health information in a secure, verified manner,” while Roger Dow of the U.S. Travel Association released a statement praising it for paving a “way forward” for the global economy in the wake of the pandemic.

As the multi-sector, global response to the coronavirus tightens the noose around civil liberties, CommonPass stands out as one of the most appalling and dangerous attacks on basic human rights in the name of public health and is rife with a potential for abuse so great, that it behooves us to find out more about the people and interests behind it.

We want your DNA

The difference between IRC’s Mae La project and The Commons Project is a question of class. Class status, to be specific. But, it is essentially the same idea and covers the same interests of the groups and individuals who form part of the Commons Project’s board of trustees; many of whom have been part of the digital tracking and healthcare technology space for years.

People like Linda Dillman, who ran Wal-Mart’s implementation of RFID employee tracking technology as the retail giant’s CIO or the former Chief Technology Officer for the U.S. Department of Health and Human Services, Bryan Sivak, who is now a Managing Director at Managing Director at Kaiser Permanente, one of the largest healthcare insurance plan providers in the nation. Other trustee affiliations stand out, as well, such as Will Fitzpatrick, General Counsel to the Omidyar Network and George W. Bush’s Assistant Secretary of Defense, Health Affairs, Dr. William Winkenwerder, Jr.

At the core of these efforts is the desire to create a DNA-based population screening agenda, which people like Perkins and Meyer are forcefully pushing forward. Perkins worked as the CMO at a company called Human Longevity, Inc., which “combines state-of-the-art DNA sequencing and expert analysis with machine learning, to help change medicine to a more data-driven science.”

DNA screenig for the $hit as in PCR tests? OH. MY. GOD.