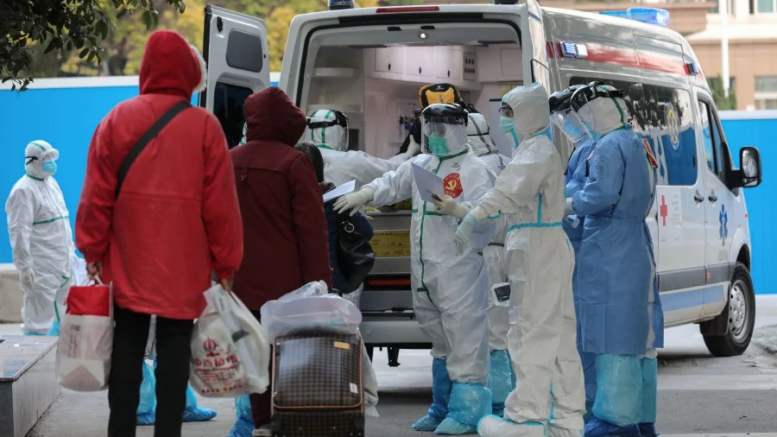 Please Share This Story!
PDF 📄
As a Technocracy, China’s bumbling incompetence is being exposed. However, when people don’t recognize that China IS a Technocracy, then it’s all for nothing and Technocrats will sail on undisturbed. This is why is it critical to understand Technocracy in the first place. ⁃ TN Editor

While the world fights the coronavirus pandemic, China is fighting a propaganda war. Beijing’s war aim is simple: shift away from China all blame for the outbreak, the botched initial response, and its early spread into the broader world. At stake is China’s global reputation, as well as the potential of a fundamental shift away from China for trade and manufacturing. Also at risk is the personal legacy of General Secretary Xi Jinping, who has staked his legitimacy on his technocratic competence. After dealing with the first great global crisis of the 21st century, the world must fundamentally rethink its dependence on China.

After months of staying holed up in the Forbidden City, Mr. Xi finally ventured to Wuhan, the epicenter of the virus, to declare victory over the virus as all the makeshift hospitals have been closed. Yet no one knows if Beijing’s claims that new indigenous cases are slowing down are true or not, given long-standing doubt about the veracity of any official Chinese statistics, and the party’s failure to act in the early days of the coronavirus.

The communist government instead is claiming that it has largely controlled the epidemic, even as it suspiciously now blames “foreign arrivals” for new cases of virus. Leaked video from China shows huge lines at a hospital in Chongqing, for example, raising questions about just what is happening around the country.

What Beijing cares about is clear from its sustained war on global public opinion. Chinese propaganda mouthpieces have launched a broad array of attacks against the facts, attempting to create a new narrative about China’s historic victory over the Wuhan virus. Chinese state media is praising the government’s “effective, responsible governance,” but the truth is that Beijing is culpable for the spread of the pathogen around China and the world. Chinese officials knew about the new virus back in December, and did nothing to warn their citizens or impose measures to curb it early on.

Instead of acting with necessary speed and transparency, the party-state looked to its own reputation and legitimacy. It threatened whistleblowers like the late Dr. Li Wenliang, and clamped down on social media to prevent both information about the virus and criticism of the Communist Party and government from spreading.

Unsurprisingly, China also has enablers abroad helping to whitewash Beijing’s culpability. World Health Organization Director-General Tedros Adhanom Ghebreyesus refused for months to declare a pandemic, and instead thanked China for “making us safer,” a comment straight out of an Orwell novel. This is the same WHO that has refused to allow Taiwan membership, due undoubtedly to Beijing’s influence over the WHO’s purse strings.

Most egregiously, some Chinese government officials have gone so far as to claim that the Wuhan virus was not indigenous to China at all, while others, like Mr. Tedros, suggest that China’s response somehow bought the world “time” to deal with the crisis. That such lines are being repeated by global officials and talking heads shows how effectively China’s propaganda machine is shaping the global narrative. The world is quickly coming to praise the Communist Party’s governance model, instead of condemn it.

The reality is that China did not tell its own people about the risk for weeks and refused to let in major foreign epidemiological teams, including from the U.S. Centers for Disease Control. Thus, the world could not get accurate information and laboratory samples early on. By then, it was too late to stop the virus from spreading, and other world capitals were as lax in imposing meaningful travel bans and quarantines as was Beijing.

Because of China’s initial failures, governments around the world, including democratic ones, now are being forced to take extraordinary actions that mimic to one degree or another Beijing’s authoritarian tendencies, thus remaking the world more in China’s image. Not least of the changes will be in more intrusive digital surveillance of citizens, so as to be able to better track and stop the spread of future epidemics, a step that might not have been necessary if Beijing was more open about the virus back in December and if the WHO had fulfilled its responsibilities earlier.

The Stakes for China and Globalization

Regardless of how much some governments and global voices praise China, Xi and the Communist Party care about dominating the propaganda war because the Wuhan virus has stood their nation on a razor’s edge. Xi’s own legitimacy is not merely at stake. His government is ferociously fighting to divert blame and attention, fearing that the world rightfully may utterly reassess modern China, from its technocratic prowess to its safety. Decades of a carefully curated global image may crumble if nations around the globe start paying attention to China’s lax public health care, incompetent and intrusive government, and generally less developed domestic conditions.

Xi’s fears are well founded, as a global reconsideration of China is long overdue. Legitimate criticisms and doubts about China’s governance and growth model were long suppressed by Chinese pressure and the willingness of many to buy into the Communist Party’s public line. Public shaming of foreign corporations, global influence operations, and “elite capture” — all are policies Beijing has deployed to maintain China’s public image.

History has a way of repeating itself and this COVID-19 event appears to be no different. There is an ominous black cloud beginning to rapidly form and it is being perpetuated by a single question, “Where did COVID-19 originate”. What occurred with the global Spanish flu of 1918 now appears to be re-materializing with the advent of COVID-19 in 2020. Some reputable historians say that the Spanish flu originated at a military training center in Missouri USA, whose trainees were rapidly deployed to Europe to engage in WW1. Did something similar occur in conjunction with the World Military Games held… Read more »

The anti China view is outdated and simplistic. They might be authoritarian but hardly communist anymore. Many people still don’t get that this is not east vs west
You are also being a part of the problem by accepting the alleged proportions of this manufactured crisis.