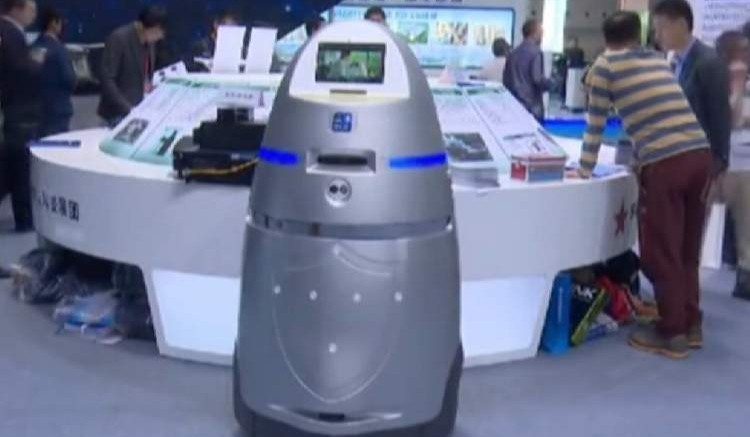 TN Note: This is an autonomous, electrical zapping robot that facilitates riot control efforts so that the Technocrat government can suppress protesters. There is no arbitrary limit to the armament carried, so one can expect more aggressive models will be unveiled in the future. Technocrats engineer projects because they can, and they leave the moral decisions to their ‘consumers’.

A riot control robot that can zap people with an electrical charge has been unveiled in China.

Hailed as the country’s first “intelligent security robot”, it has an “electrically charged riot control tool” and an SOS button for people to notify police.

It can navigate autonomously, and uses on-board cameras to analyse situations.

A photo posted to Twitter by The People’s Daily Online news site was retweeted by US intelligence whistleblower Edward Snowden with the sarcastic caption: “Surely this will end well.”

The robot – which is 1.5m tall and weighs 78kg – was shown off at the Congqing Hi-Tech Fair.

It has a top speed of 11mph and can work for up to eight hours on a single charge.

It was built by the National Defence University in China and has “sensors that mimic the human brain, eyes and ears”.

Has China reverse engineered this nasty piece of tech seeing as this report is similar to the January 1st one about the same item on the streets of California ?