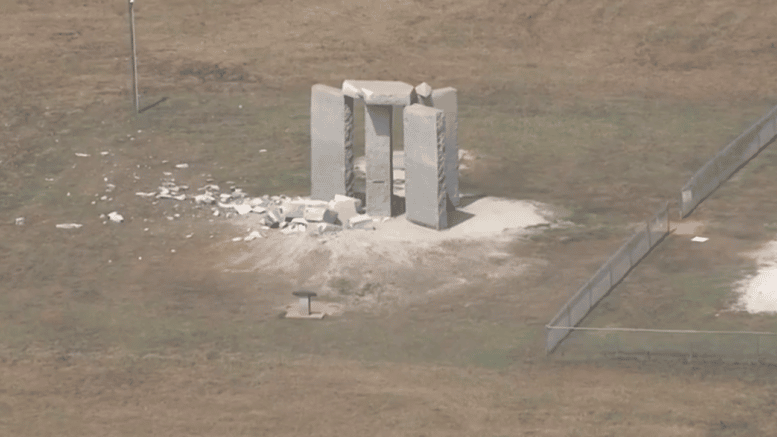 Please Share This Story!
PDF 📄
Technocracy’s handmaidens will undoubtedly take this as a direct threat to Klaus Schwab’s Great Reset program that includes population reduction and control over earth’s resources. Erected in 1980, the Guidestones appeared to be modeled after the Club of Rome’s Limits to Growth that was published in 1972. ⁃ TN Editor

The Elbert County Georgia Sheriff’s Office is investigating a mysterious event at the Georgia Guidestones after a picture was posted to social media showing what appears to be rubble at the site and residents reported hearing a “boom.”

It is not known at this time if the Georgia Guidestones were attacked by a person using some sort of explosive device or if there could have been a small earthquake that partially collapsed the controversial monument, which calls for a New World Order with a vastly smaller global population living “in harmony” with nature.

All we know right now is this: The sound of what could have been an explosion was reportedly heard in the area around 4 a.m. Wednesday, July 6. A photo was posted to Facebook by local resident Chris Smith about 7:30 a.m. showing what appears to be about half the monument lying in rubble on the ground.

The Georgia Guidestones has been referred to as “the devil’s monument,” and sits on what is now county property in Elbert County. It was erected under very mysterious circumstances in 1980 with words etched in the monument calling for, among other things, the genocide of 90 percent of the world’s population. A population of just 500 million, compared to today’s 7.5 billion, is advocated as the proper “balance” with nature.

A video was posted by a local NBC affiliate about 9 a.m. Wednesday that you can watch here. It shows county emergency response teams along with the Georgia State Patrol on the scene, and toward the end of the video a clear shot of the rubble can be seen.

WSGC 105.3 Radio reports that “Hartwell Highway is now CLOSED between Thirteen Forks and Maple Springs Roads.  State and local law enforcement and emergency agencies are on the scene at the Georgia Guidestones, which were significantly damaged by an explosion early Wednesday morning. Take caution if traveling on the Hartwell Highway today.”

The guidestones sit on a site 7 miles north of Elberton on Georgia Highway 77 and are often referred to as an American Stonehenge, although some in the Christian community have labeled it the “Devil’s Monument,” or a “monument to Satan” and his minions’ obsession with eugenics, which is seen today in so many of the policies coming out of the World Economic Forum and United Nations.

Please check back as this is a developing story that we will be following all day here at LeoHohmann.com. We are based in Georgia and have reported first-hand accounts about this monument in the past, including our 2017 visit to the site.

Patrick Wood is a leading and critical expert on Sustainable Development, Green Economy, Agenda 21, 2030 Agenda and historic Technocracy. He is the author of Technocracy Rising: The Trojan Horse of Global Transformation (2015) and co-author of Trilaterals Over Washington, Volumes I and II (1978-1980) with the late Antony C. Sutton.
Subscribe
63 Comments
Oldest
Newest Most Voted
Inline Feedbacks
View all comments

Gee too bad the whole “mess”of stones weren’t taken down… along with Braindead Brandon and Just-an-arse Turd-douche of Canada.

Incredible ! Two or three days ago, I just thought that some people should damage this monument that is an insult to mankind. And here we are today ! LOL.

Wishes do come true sometimes. Hoping more towers of Babel will land in the ground. Wouldn’t hurt my feelings if the earth swallowed them up.

Although I’ll give an ‘A’ for effort……they didn’t do a very good job of it. Need to go back and FINISH the job! lol

Good going and kudos to whomever did it. But it’s not enough.

Only one stone tower came down, apparently. This stone abomination supporting the ideals of the eugenics-oriented but faceless bloodline families and their ideologically compliant front men/women as well as other typical suspects worldwide glorifies a DEATH CULT. Their so-called monument to eugenics deserves/requires removal. It’s hate on a slab.

Won’t be shedding any tears over that loss. Deuteronomy 12:3

Yes to both sides of your emotions.
The NWO is in a state of war with the rest of us and their propaganda devices
are legit targets of opportunity.
I WANT NAMES OF ALL WHO DARE TRY TO REPAIR THE OBJECT OF FILTH.
MAKE EM FAMOUS.

I believe a DUMB is directly underneath that location. At a minimum, the area is an ancient burial site for the mound-building pre-native american civilization which lived in the area during the antediluvian period. There is evidence the NWO bloodlines view themselves as the progeny of these entities.

Not near enough! ALL of that granite should be turned to dust in the name of Jesus Christ!

Good news! They should blow it all to smithereens.

‘Explosion’ reported at Georgia Guidestones: ‘Monument to the devil’ has now been ‘completely demolished’ – LeoHohmann.com

UPDATE: ‘Explosion’ at Georgia Guidestones Caught on Video – ‘Monument to the Devil’ Later ‘Completely Demolished’ After Explosion - Survive the News

UPDATE: ‘Explosion’ at Georgia Guidestones Caught on Video – ‘Monument to the Devil’ Later ‘Completely Demolished’ After Explosion – The King Of Stocks

UPDATE: ‘Explosion’ at Georgia Guidestones Caught on Video – ‘Monument to the Devil’ Later ‘Completely Demolished’ After Explosion – the Conservative TAKE

UPDATE: ‘Explosion’ At GA Guidestones Caught On Video! Completely Destroyed Monument To The Devil! - Alien Behind