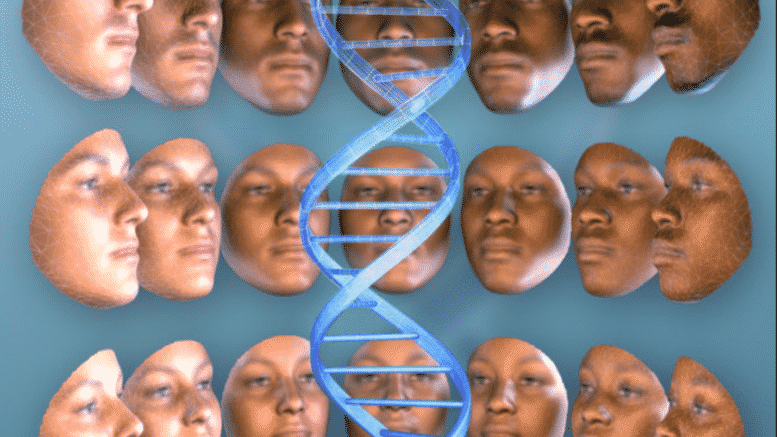 Please Share This Story!
PDF 📄
Phrenology reads the bumps on your head to predict mental traits. Phrenotyping uses your DNA to create your mugshot for law enforcement. Both are cracked but the latter was financed by the Department of Defense and is now being adopted by police departments. ⁃ TN Editor
My heart sank when I read the news that the largest police force in the country was about to use highly questionable DNA mugshots.

Nearly two years ago, I wrote an article describing how police departments across the country were using Parabon Nanolabs, “phenotyping” to ID and arrest innocent people.

According to a NY Daily News article the New York Police Department (NYPD) is considering using Parabon to ID suspected criminals based on their DNA mugshot.

Parabon is full of praise at the prospect of  having the largest police force in the country use their product to arrest suspected criminals based on DNA mugshots.

“Having developed these tools over most of the past decade, it is gratifying for our team to receive this permit after passing NYS DoH’s [Department of Health’s] stringent review process,” said a statement from Dr. Ellen Greytak, Parabon’s director of bioinformatics.

In 2015, the NY Times asked 50 employees to identify reporter John Markoff’s phenotyping profile and the results speak for themselves; not one of the fifty employees correctly identified him.

According to Parabon there is nothing to worry about because they use “deep data mining and advanced machine learning” to create DNA profiles (mugshots).

“Over the past four years, using deep data mining and advanced machine learning algorithms in a specialized bioinformatics pipeline, Parabon — with funding support from the US Department of Defense (DoD) — developed the Snapshot Forensic DNA Phenotyping System, which accurately predicts genetic ancestry, eye color, hair color, skin color, freckling, and face shape in individuals from any ethnic background, even individuals with mixed ancestry.”

The NYPD and law enforcement across the country are more than willing to use DNA mugshots funded by the Department of Defense because phenotyping “was shown to be extremely accurate.”

“Snapshot was built by Parabon NanoLabs for the defense, security, justice, and intelligence communities with funding from the United States Defense Threat Reduction Agency. As part of the development and validation process, Snapshot was tested on thousands of out-of-sample genotypes and was shown to be extremely accurate.”

But is “Snapshot” phenotyping extremely accurate?

Nature.com notes that the accuracy of Parabon’s DNA mugshots is highly questionable.

“It’s very limited, what we know about the face, and this particular company [Parabon Nanolabs] says they can predict it from DNA. It’s pretty bad that they don’t publish how they do this and how they validated this,” Manfred Kayser  a DNA researcher at Erasmus University Medical Center in Rotterdam said.

Case in point: a recent news story on Channel 2 KUTV revealed that a Salt Lake City Police Department/Parabon snapshot looked nothing like the suspect arrested in the killing of Shelly Black.

The sketch, created by a company called Parabon NanoLabs, shows a Black man. The description on the sketch says his ancestry is African-American. Adam Durborrow, according to his booking information, is Asian.’

If Parabon’s snapshots have not been peer-reviewed as Vulture.com said, then why are they using it to help ID unidentified children?

Since 2017, the National Center for Missing & Exploited Children has been using Parabon’s snapshots to help them ID unidentified children.

“Our goal is to help give them their name back, and give their family some resolution. An accurate facial reconstruction is critical,” Carol Schweitzer, a supervisor for NCMEC’s missing children division  said.

“Our forensic artists tell us they know they have finished a reconstruction when they see a face staring back at them,” said Schweitzer. “Someone knows who these children are, and with Parabon’s help, we can show them a face they will hopefully recognize.”

If a 2015 NY Times Parabon accuracy study, and a recent Salt Lake City misidentification of a suspected killer aren’t enough to make one question why any police department, let alone the largest police department in the country, would want to use it then police forensics in America really has become a laughing stock.

Time and again we have seen America’s law enforcement use junk science to justify arresting innocent people of color. DNA mugshot’s should be at the top of the list of reasons as to why we need police reform.

It seems to me that the AI-DNA created mugshots are created based on an idealized result. The sugject has ideal nutrition, little stress, etc., while maturing. Since everyone has a different environment while growing up, the resultant facial features cannot be reliably predictable. There is no doubt that the environment has a great effect on the DNA’s expression. Seems to me that the police have been conned,