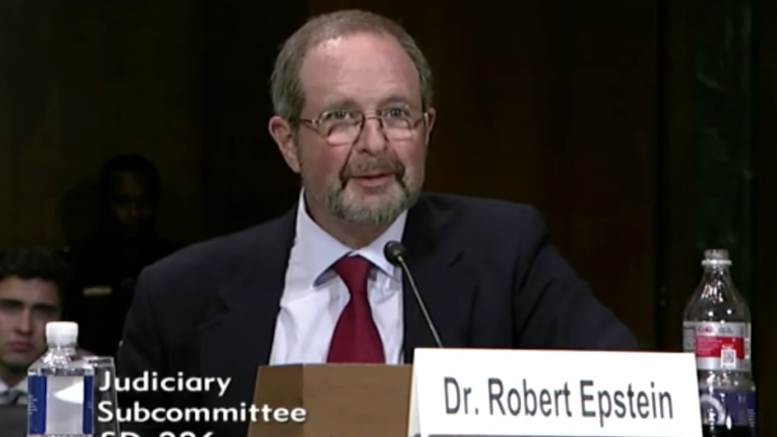 Please Share This Story!
PDF 📄
Dr. Robert Epstein, a Democrat, has been writing that Big Tech will make it impossible for Trump to be re-elected in 2020. He misses the point that Big Tech are Technocrats intending to completely dominate society, everywhere. ⁃ TN Editor

No matter which weak candidate the Democrats ultimately nominate, and even with Russia’s help, President Donald Trump can’t win the 2020 election. For that matter, in races nationwide in which the projected winning margins are small—say, under 5 percent or so—Republicans, in general, are likely to lose.

That’s because of new forces of influence that the internet has made possible in recent decades and that Big Tech companies—Google more aggressively than any other—have been determined to perfect since Armageddon Day—oh, sorry, Election Day—in 2016.

For the record, I’m neither a conservative nor a Trump supporter. But I love democracy and America more than I love any particular party or candidate, and rigorous research that I have been conducting since 2013 shows that Big Tech companies now have unprecedented power to sway elections.

While I cheer the fact that 95 percent of donations from tech companies and their employees go to Democrats, I can’t stand by and watch these companies undermine democracy. As long as I’m still breathing, I will do everything I can to stop that from happening—and, for the record, I’m NOT suicidal.

The threat these companies pose is far from trivial. For one thing, they can shift opinions and votes in numerous ways that people can’t detect.

Remember the rumors about that movie theater in New Jersey that got people to buy more Coke and popcorn using subliminal messages embedded into a film? Well, those rumors were a bit exaggerated—those messages actually had a minimal effect—but Google-and-the-Gang are now controlling a wide variety of subliminal methods of persuasion that can, in minutes, shift the voting preferences of 20 percent or more of undecided voters without anyone having the slightest idea they’ve been manipulated.

Worse still, they can use these techniques without leaving a paper trail for authorities to trace. In a leak of Google emails to the Wall Street Journal in 2018, one Googler asks his colleagues how the company can use “ephemeral experiences” to change people’s views about Trump’s travel ban.

Ephemeral experiences are those fleeting ones we have every day when we view online content that’s generated on-the-fly and isn’t stored anywhere: newsfeeds, search suggestions, search results, and so on. No authority can go back in time to see what search suggestions or search results you were shown, but dozens of randomized, controlled, double-blind experiments I’ve conducted show that such content can dramatically shift opinions and voting preferences. See the problem?

Speaking of content, I’m getting sick of seeing headlines about Russian interference in our elections. Unless the Russians suddenly figure out how to massively hack our voting machines—and shame on us if we’re incompetent enough to let that happen—there’s no evidence that bad actors such as Russia or the now-defunct Cambridge Analytica can shift more than a few thousand votes here and there. Generally speaking, all they can do is throw some biased content onto the internet. But content isn’t the problem anymore.

All that matters now is who has the power to decide what content people will see or will not see (censorship), and what order that content is presented in. That power is almost entirely in the hands of the arrogant executives at two U.S. companies. Their algorithms decide which content gets suppressed, the order in which content is shown, and which content goes viral. You can counter a TV ad with another TV ad, but if the tech execs are supporting one candidate or party, you can’t counteract their manipulations.

Forget the Russians. As I said when I testified before Congress last summer, if our own tech companies all favor the same presidential candidate this year—and that seems likely—I calculate that they can easily shift 15 million votes to that candidate without people knowing and without leaving a paper trail.

By the way, the more you know about someone, the easier it is to manipulate him or her. Google and Facebook have millions of pieces of information about every American voter, and they will be targeting their manipulations at the individual level for every single voter in every swing state. No one in the world except Google and Facebook can do that.

That day has come, my friends, and it’s too late for any law or regulation to make a difference—at least in the upcoming election. There’s only one way at this point to get these companies to take their digits off the scale, and that’s to do to them what they do to us and our children every day: monitor them aggressively.