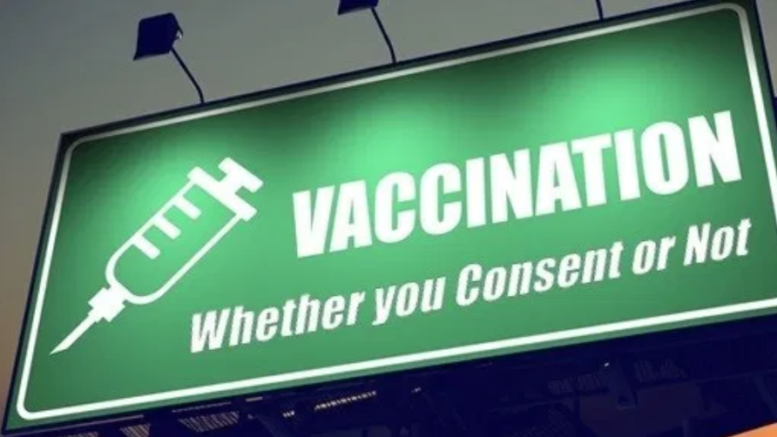 Government mandated and forced vaccinations are most certainly coming thanks to China’s coronavirus pandemic. It is key to recognize that lobbyists like ALEC have been pushing state legislation for mandated vaccines for years.

It is also key to note that ALEC is a ‘conservative’ Republican-based organization, which demonstrates the political transcendency of Technocrat initiatives. ⁃ TN Editor

Over the last several months, Americans have witnessed an increase in media propaganda regarding the “dangers” of “anti-vaxxers,” the “proven science of vaccines,” and the “tragedies” that ensue from the failure to vaccinate. That propaganda blitz has resulted in massive hysteria stemming from similar levels of ignorance.

Also resulting from the push by Big Pharma-funded corporate media outlets is the emotional and panicked campaign of pro-vaxxers, vaccine pushers, and adherents to the relatively recent new religion of “scientism” – the religious belief in anything labeled as science or scientific, regardless of whether or not that concept directly contradicts observable reality and experience or even regardless of whether or not it is actually scientific.

The so-called vaccine debate – which is not truly a debate since a debate requires the participation of two opposing sides – is generally nothing more than a shouting and shaming campaign against parents who have come to the conclusion that vaccines are not safe, effective, or neither.

Indeed, it is the unbridled emotion of the pro-vaccine camp that has been provoked and subsequently harnessed into a powerhouse of vitriol and social pressure that is then presented as a public health crisis. The howling of the trendy masses, glued to their televisions, sitcoms, and NPR, is then presented as an organic public outcry in the media, resulting in the conveniently timed response of politicians and lawmakers.

Of course, with the creation of the false debate, there is also the political polarization of the issue – the left must be pitted against the right – in a typical but tried and true method of divide and conquer strategy.

Originally, holding questions regarding the safety or effectiveness of vaccinations was something that bridged political boundaries. Granted, the individuals who held these views were a minority. However, those numbers were growing and could be found in the midst of liberals and conservatives, libertarians and socialists, and even those completely unaligned to any ideology.

Now, however, that is beginning to change. The Big Pharma companies that fund the mainstream media and the political parasites infecting the federal and state capitols have managed to turn this debate into a partisan issue.

The result of this massive absorption of indoctrination is that we have the passage of bills mandating that children be vaccinated by force of law in California and even the attempt to force adults to be vaccinated as well.

With mandates coming out of California, North Carolina, and Vermont, clearly there is a nationwide agenda at foot.

But while those on the left continue to attack Koch Industries and ALEC for funding a number of horrific economic policies and divisive domestic campaigns, painting any idea they oppose coming from the Republican camps as a “Koch-funded” program (it often is), the reality is that the leftists are the biggest dupes in the vaccine game.

This is because, while leftists hawk vaccines and pride themselves on their obedience to doctors and “scientists,” they are doing nothing more than falling into line with a massive Koch-funded and ALEC-facilitated propaganda campaign.

For those who may not be familiar with the American Legislative Exchange Council (ALEC), the council is considered a “non-profit organization” made up of Conservative state legislators and corporate private sector “partners.” This mixture of government officials and corporate agents then meet regularly, replete with funding from major corporations all across the world to discuss, plan, write, and submit legislation that is beneficial to the corporations.

In one sense, ALEC is a massive corporate lobbying firm. In another, however, ALEC is much more, since much of the legislation submitted by the attentive congressman is actually written for the Senator or Representative by the agents of the organization. It is an organization that provides funding and direction (marching orders) for Congressmen, particularly those at the state level.

While slimy billionaires like George Soros act as the guiding force behind much of the American left, ALEC and KOCH Industries tend to fill the same void for the right; although, in truth, most of the corporations that make up ALEC are those who also fund Democratic candidates. Presentation, however, in a carefully crafted political theatre like the United States, is paramount.

As Alan Greenblatt describes the organization in his article for Governing,

For decades, the American Legislative Exchange Council has been a force in shaping conservative policies at the state level. Today, its impact is even more pervasive. Its legislative ideas are resonating in practically every area of state government, from education and health to energy, environment and tax policy. The group, which brings together legislators with representatives from corporations, think tanks and foundations to craft model bills, has rung up an impressive score. Roughly 1,000 bills based on ALEC language are introduced in an average year, with about 20 percent getting enacted.

Brendan Greeley of Bloomberg Business describes ALEC in a similar fashion. He writes,

For three decades, the American Legislative Exchange Council, the meeting’s host, has brought together corporations (including Pfizer (PFE), AT&T (T), and ExxonMobil (XOM)) and state legislators to write what it calls model bills—pieces of legislation the industries would like to become law. Often this means protecting favored tax treatment or keeping regulations at bay. ALEC has also approved model bills on social issues, including gun control and voter registration. The bills then get passed around among the 1,800 mostly Republican legislators who are ALEC members. They introduce the model bills about 1,000 times a year in state capitols around the country, the group says. About 200 become law. ALEC pays for the meetings through membership fees (called donations) that corporations pay. The legislators receive travel stipends (called scholarships) to attend the meetings. ALEC is registered with the IRS as a nonprofit that provides a public service, not as a lobbyist that seeks to influence.

This offers two benefits: Corporate members can deduct yearly dues, which run up to $25,000—more if they want to sponsor meetings; and ALEC doesn’t have to disclose the names of legislators and executives who attend. That’s important, because if ALEC operated with complete openness it would have difficulty operating at all. ALEC has attracted a wide and wealthy range of supporters in part because it’s done its work behind closed doors. Membership lists were secret. The origins of the model bills were secret. Part of ALEC’s mission is to present industry-backed legislation as grass-roots work. If this were to become clear to everyone, there’d be no reason for corporations to use it.

While ALEC has pushed a number of bills regarding divisive wedge issues (it has to keep up its conservative veneer), it focuses mostly on economic issues promoting free market, Austrian school, deregulation, free trade, and other policies supported by major banks and corporations.

Despite all the rhetoric of ALEC and its puppets in Congress, the position of the organization and its puppets is not necessarily in favor of personal choice. This much has been made clear in the form of mandates and force of law, particularly in the area of vaccination.

This should not be surprising considering ALEC’s many Big Pharma members. While the organization is made up of a plethora of major corporations Big Pharma makes up a sizable portion of its ranks.

Below are a very small few of pharmaceutical companies that are part of ALEC’s operations.

The goal of forced vaccination has been in existence for quite some time, going back to a number of elite think tanks decades ago and the halls of pharmaceutical companies. Major pharmaceutical companies, for many obvious (or should be obvious ) reasons would also like to mandate vaccination. Increased profits from the vaccine sales and the treatment of resulting disease, as well as the cover-up of vaccine risks by a population free of a control group are but a few of the reasons such corporations are supporting the vaccine mandates.

After all, as Bertrand Russell stated as far back as 1953,

Diet, injections, and injunctions will combine, from a very early age, to produce the sort of character and the sort of beliefs that the authorities consider desirable, and any serious criticism of the powers that be will become psychologically impossible. . . .

But, while the push to mandate vaccines for children and adults is by no means an ALEC-centric conspiracy, this recent push for such laws was indeed formulated in ALEC councils.

For this reason, it is highly ironic that the political left should be the half of the paradigm that takes up the charge for mandatory vaccination laws. After all, it is the left (at the lower levels) who seems to live by the motto “If ALEC supports it, we oppose it.” This time, all it took was some clever propaganda, trendy nudging, and social shaming and the left was marching right behind ALEC as militantly as if they were Republicans all along.

The entire vaccine debate can scarcely even be labeled a debate. It is an exercise in social shaming, shouting down opposing views, and religious devotion to television and anyone wearing a lab coat or claiming to be an expert.

With the culprit behind the recent mandatory vaccine/eliminate exemption push now revealed, it is time to begin working toward repealing these laws and making sure that no similar bill is ever politically viable.

Could it be that the Coronaviris scare/propaganda is just that propaganda. Ask yourself the question. Can I refuse the Coronaviris vaccine? Will they let you? This becomes a very sinister equation. California declared a state of emergency after the first death from Coronaviris. 1 Death! While since January 24th 149 have died from the flu. Here are some other statistics. California is one of the top ten murder capitals of the US. In 2018 in L.A. alone there were 131,393 crimes. As of Feb. 2020 there were 258 murders. In 2017 there were 132,680 abortions in California, I wonder how… Read more »

It’s all about CONTROL you/me/us…nothing less, maybe more ( getting sick and spending money with the sick/death care and/or die – depopulation ). You a smart/informed person…but for ‘ them ‘ and the majority of the sheeple numbers/statistics don’t matter…Propaganda and brainwashing at it’s ‘ finest ‘…And believe me, I know because I was born on ‘ the other side ‘, in Eastern-Europe, under Communism.

It goes to show that there is no left or right partisans, only fear and emotionally manipulated people.

You right: two head, one state-corporate party…Under communism, we had one state party…Nothing new under sun, just more subtle propaganda/brainwashing…

After almost 25 years in the land of the fee ( former free ) and home of the slave ( former brave ), I wonder how more proof/time the average sheeple, I mean people, need to understand that we live in a occupied Country…land of ZOG ( Zionist Occupation Government )…?!…’ Our ‘ politicians are not kissing the Russian/Chinese or other ‘ arse ‘, but the Zionist one – from speeches at AIPAC and other Zionists lobby organizations to the ‘ wall ‘ in Zionist Israel…” To learn who rules over you, simply find out who you are not allowed… Read more »