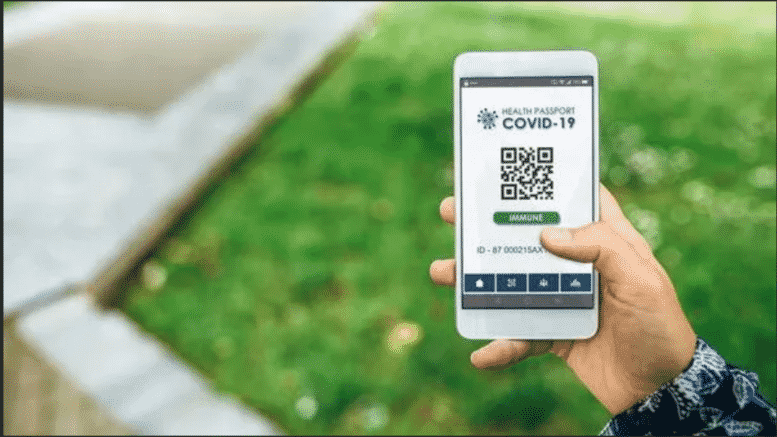 Please Share This Story!
PDF 📄
The COVID pandemic has provided convenient cover for Technocrat operatives to implement a global digital tracking system that will enable their plans for Scientific Dictatorship, aka Technocracy. They have largely hijacked the force and resources of government. ⁃ TN Editor

In January 2021, tech giants such as Microsoft, Oracle, and MITRE Corporation announced their launch of the Vaccination Credential Initiative (VCI) in partnership with healthcare companies.

On their website, the VCI describes itself as an alliance of private and public organizations dedicated to the development of the ‘issuance of verifiable health credentials’ bound to an individual digital identity.

The VCI idea depends upon a common platform from which digital wallets can be created, and on the VCI website they call for “participating organizations to commit to implementing, testing, and refining the SMART Health Cards Framework within their sphere of influence.”

According to VCI, their ‘SMART Health Cards’ are meant to “work across organizational and jurisdictional boundaries.”

SMART health cards as of now include a person’s name, gender, birth date, phone number, and email address, as well as vaccination status. Developers hope, however, that these cards will eventually become all-encompassing universal digital identities that reside within a universal digital wallet.

Josh Mandel, one of the main developers behind VCI’s SMART health cards system, said once that a complete universal digital identity is ‘essential’ to the effort of creating digital vaccination passes.

On their website, the group uses the term ‘digital wallet’ often and notes that SMART Health Cards could soon be used as digital IDs for all activities, including travel and every purchase an individual makes during commercial activity.

According to the ‘about’ section on their website, the group’s members section includes corporations like Amazon, Microsoft, Google, Apple, and the MITRE Corporation.

Along with the MITRE Corporation, one of the groups listed in the governance section on the website is the Commons Project Foundation, which is the main backer of the VCI and also hosts the VCI website.

The Commons Project Foundation also describes itself as a ‘private and public alliance.’

Listed on the leadership board of the Commons Project Foundation is the President of the Rockefeller Foundation, the Global Head of Performance at BlackRock, the senior managing director at the Blackstone Group, and Julie Gerberding, the former director of the CDC. Gerberding once wrote an op-ed in Time Magazine calling for an ‘International Pandemic Surveillance Network.’

There are many other heads of multilateral development banks (MDBs), former Goldman Sachs partners, UN advisers, and other multinational corporations listed on their assembly.

The World Economic Forum’s website lists the CEO and CMO of the Commons Project Foundation as Paul Meyer and Bradley Perkins respectively. Following his career at the US Center for Disease Control, Perkins was on the advisory board for the RAND Corporation, and his Partner Paul Meyer wrote President Clinton’s speeches while attending Yale.

In partnership with the World Economic Forum and the Rockefeller Foundation — as well as an almost endless list of corporations and government agencies — the Commons Project Foundation created the CommonPass.

According to the World Economic Forum’s website, just like the VCI, the Commons Project Foundation seeks to “develop and launch a standard global model to enable people to securely document and present their COVID-19 status to facilitate international travel and border crossing.”

The site states that their ‘CommonPass‘ is powered by their “CommonTrust Network™ Registry and VCI™ Directory.” and will allow individuals to document their “COVID-19 status to satisfy country or state entry requirements,” and “access lab results and vaccination records when you need it.”

According to MintPress News, the cofounders of the Commons Project Foundation have a longstanding relationship with the International Rescue Committee.

In one article, Journalist Whitney Webb noted that the CEO of the International Rescue Committee developed a pilot program in Myanmar for the digital biometric identification system, supported by the ID2020 alliance. According to Webb, the ID2020 Alliance is backed by Microsoft and directly funds the Commons Project Foundation.

“iRespond, an international non-profit organization that is “dedicated to using biometrics to improve lives through digital identity,” has begun piloting a new biometric program for newborns among the predominately Karen refugee population along the Myanmar-Thailand border… The pilot program is being conducted as part of the controversial ID2020 alliance, backed by Microsoft, the GAVI vaccine alliance, and the Rockefeller Foundation… iRespond is partnered with Mastercard, another ID2020 partner that is closely allied with the company, Trust Stamp, a biometric identity platform that also doubles as a vaccine record and payment system.”

The push for a universal digital wallet with an all-encompassing universal digital ID came long before the onset of COVID-19. As MintPress News reported last year, the very first pilot program for a digital identity platform was launched in 2018 in West Africa. Thanks to the GAVI vaccine alliance, which is funded in large part by the Bill and Melinda Gates Foundation, Trust Stamp, and Mastercard, the pilot program gained new life during the height of the pandemic.

Now we knw what the push for the vax is all about.

“The Government Intel Agencies Behind Digital Vaccine Passport IDs” which will be stored inside all vaccinated.

[…] identity tied to whatever they deem important for you to do. COVID-1984 These are all connected: https://www.technocracy.news/the-government-intel-agencies-behind-digital-vaccine-passport-ids/ […]

QUESTION: If injections of razor sharp magnetic graphene oxide fragments can be agitated by 5G frequencies, can an injected person who criticizes the Great Reset be killed by a 5G telephone call ?

If so, a mandate to be jabbed is a demand to point a loaded gun to the head of any injected person.