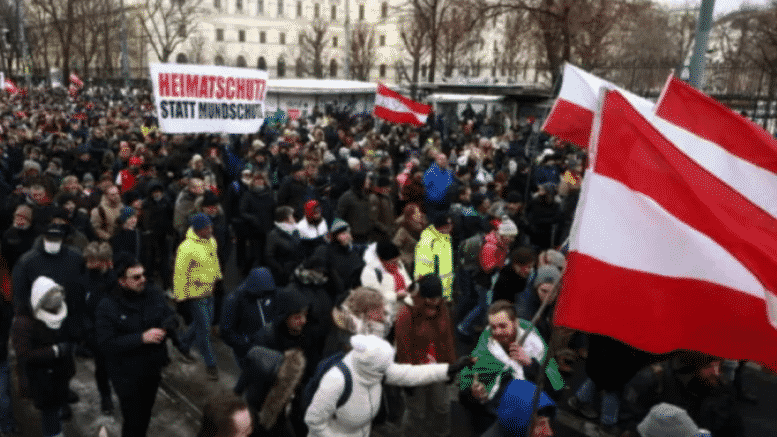 Please Share This Story!
PDF 📄
Technocratic tyranny is a global issue. The author correctly concludes, “Bodily autonomy is the foundation stone of self-government, and self-government is the thing that gives freedom meaning. If we do not enjoy sovereignty over our minds and our flesh, then we are not free in any meaningful way.” ⁃ TN Editor

Europe is on a precipice. It has marched, blindly, towards something very much resembling tyranny. Austria will shortly criminalise those who refuse the Covid vaccine. Germany looks set to follow. Ursula von der Leyen, president of the European Commission, is wondering out loud if every member state should do likewise and make offenders of those who reject this form of medication. In Italy you are deprived of your livelihood rather than your liberty if you say no to vaccination: the unvaxxed are not permitted to work. Anywhere. In Greece, everyone over the age of 60 must pay the government 100 euros for every month they remain unvaxxed. As if the Greek government, in cahoots with its masters in Brussels, had not immiserated Greek pensioners enough already.

Police in Rotterdam opened fire on people protesting against Covid restrictions. Three were seriously injured. Austrian cops have wielded batons and shields against the thousands who took to the streets of Vienna to say no to mandatory vaxxing. In Brussels, the black, bureaucratic heart of the EU project, water cannons and tear gas were unleashed upon citizens agitating against vaccine passes. The irony is almost too much: in the European quarter of Brussels, the very part of Europe in which the modern European sensibility was forged by politicians, experts and technocrats, ordinary people make a blow for freedom and the forces of this supposedly liberal new continent beat them down. Rarely has modern Europe’s bluster about ‘human rights’ and ‘respect’ been so savagely exposed.

What is happening in Europe right now is nothing short of terrifying. We are not merely witnessing another round of Covid restrictions. This isn’t just the introduction of another set of emergency measures that some people believe are necessary to stave off the latest Covid wave and the Omicron threat lurking on the horizon. No, we are living through a chilling overhaul of the entire relationship between the state and the individual, with the state empowered to such an extraordinary degree that it can now instruct its citizens on what to inject into their bodies, and the individual so politically emaciated, so denuded of rights, that he no longer even enjoys sovereignty over himself, over that tiny part of the world that is his own body and mind. We are witnessing the violent death of European liberalism and the birth pangs of a new and deeply authoritarian era.

Many seem not to recognise how serious a development mandatory vaccination is. Even those of us who are pro-vaccination, who have been happily vaxxed against Covid-19, should look with nothing less than horror upon the proposal that it should be an offence not to be vaccinated; that a citizen should be fined thousands upon thousands of euros if he refuses this treatment. One of the ideas being discussed in Austria ahead of its mandatory vax law that will be introduced in February is that citizens who refuse vaccination will be summoned to a local court. If they ignore the summons twice they will face a fine of 3,600 euros. If they continue ignoring the state’s demand that they receive medical treatment that they do not want, they’ll be fined 7,200 euros. These are life-ruining fines. There is no talk – yet – of imprisoning people who reject the vaccine, but the Austrian state is making it crystal clear that it will happily wield its power to propel the unvaxxed into destitution.

Germany has already enforced a lockdown of the unvaccinated – that is, it has used the full force of the law to divide the populace between those who have made the right medical decision, and thus may enjoy some crumbs of liberty, and those who have not, and thus deserve nothing less than house arrest. Now, outgoing chancellor Angela Merkel says mandatory vaxxing is likely to be introduced early next year. Ursula von der Leyen seems to think that every EU member state should force vaccination upon its citizens. How to ensure that everyone gets vaxxed ‘needs discussion’, she said recently. We must ‘potentially think about mandatory vaccination’, she continued. The 500million inhabitants of the European Union, of this supposed bastion of human rights, this political union we were told was necessary to preserve the dignity and freedom of modern Europeans, face the prospect of a neo-imperial diktat instructing them to receive medical treatment or else face severe consequences.

We underestimate at our peril just how grave an assault on personhood mandatory vaccination represents. To my mind, forced vaccination is such an obscenity that even justice secretary Dominic Raab’s assurance that it won’t happen in the UK was far too soft for my liking. ‘I don’t think’ it will happen here, he said. Don’t think? He should have said it will never happen here, over my dead body, because it would represent such an intolerable assault on the Enlightenment-derived liberties upon which our nation is built. Everyone is saying mandatory vaccination goes against the Nuremberg Code, which insists voluntary consent must be given for medical intervention. But the ideal of individual sovereignty goes back much further than that. In his Letter Concerning Toleration (1689), the great Enlightenment philosopher John Locke sought to ‘settle the bounds’ between the individual and officialdom. He wrote that even if a man ‘neglect the care of his soul’ or ‘neglect the care of his health’, still the authorities have no right to interfere with him. ‘No man can be forced to be… healthful’, he wrote.

US and EU sits on a $200 trillion derivate bomb and are technically bankrupt.
The iron hand is to keep US Allies/EU populations down and avoid riots when the inflation and the hunger games sets in.

Even worse, the EU wants to abolish the ɴüʀɴʙᴇʀԍ Code.

The article is written in Romanian language:

The Enlightenment and the French Revolution was the cause of the present problem. Masonic infiltration of the clergy completed at the wicked council spelled the end of Chirstendom and the birth of Eurabia, ruled by communism and Islam, and nursed by the sour milk of feminism and women’s liberation. Women should not be voting in public. Even the debauch ancient Greeks knew that much. Now that the beast system is here I don’t foresee any armed resistance in Austria or Germany or Italy. What will follow is more demonization of the unclean, uninitiated to the satanic world order and more… Read more »

You said! “The Catholic Church is the only true Church and has all authority on earth over nations of people.” This is and absolute LIE! The Pope in Rome IS A USUPER and has no authority over the true church of Jesus Christ, none. He is leader of the false religion that will lead people to hell. The Roman Catholic is ‘BABYLON THE MOTHER OF HARLOTS AND ABOMINATIONS OF THE EARTH.’ Revelation 17:5. The second thing you said, “Where is the pope who will denounce international Jewry and its denial of this truth? You are an anti-Semite sir and I… Read more »

You’re doing the same thing as the anti-Christ and the Jews and Moslems spreading horrible blasphemies and corruption of the unknowing… outside of the Catholic Church there IS NO SALVATION. The apostles have always understood this explicit teaching of Jesus Himself. Instead of resorting to name calling and ad hominem attacks perhaps you should reassess your beliefs before it is too late. Since you failed to comment on the article at all, I will again reiterate that be it Israel or Italy which is the site of the royal priesthood in the line of Melchizedek, in Jerusalem or Rome, neither… Read more »

You various football clubs never stop hailing your own preference do you :-D.
As you write “WHOEVER eats my flesh…….etc”, I think our Lord and our Judge will select whom they want notwithstanding these stupid quarrels.

You have no hope in Christ do you? We are at the end of the age of dispensation, Christ will come for his Bride, the True Church, believers saved by grace alone, and then, the tribulation. This thing you describe will not last generations for God’s wrath is upon this world as soon as the indictments of evil are exposed for all to see.

He will not understand this. He is ‘spiritually blind’ unfortunately. God has exposed the Catholic Church over and over again as an Harlot. Priests (so called) molesting children, Nuns getting pregnant, and the murders of millions of people through the ages by whatever means, even Hitler. A friend of mine said when she was young that LAST boys to choose for dating were the Catholic boys, they had a very bad reputation on the treatment of girls. How does this represent a good and Holy God? It does not! It must be a false church. Who would want to go… Read more »

The European leadership, is as bankrupt as ours here in the U.S. and in every other Western Nation claiming to be democratic.

Amen Patrick on your comments on the current insanity regarding what I call the covid religion. I don’t believe the great tribulation is too far off. I wonder sometimes if it hasn’t already started. It feels like the prelude to TGT for sure in my book. Just thought about that verse in the Book Of James. “The effectual fervent prayer of a righteous man availed much.” It’s rather odd in my eyes that most politicians have totally publicly ignored the reported deaths and injuries that covid jabs have caused. Any informed individual has to conclude that there are sinister agendas… Read more »