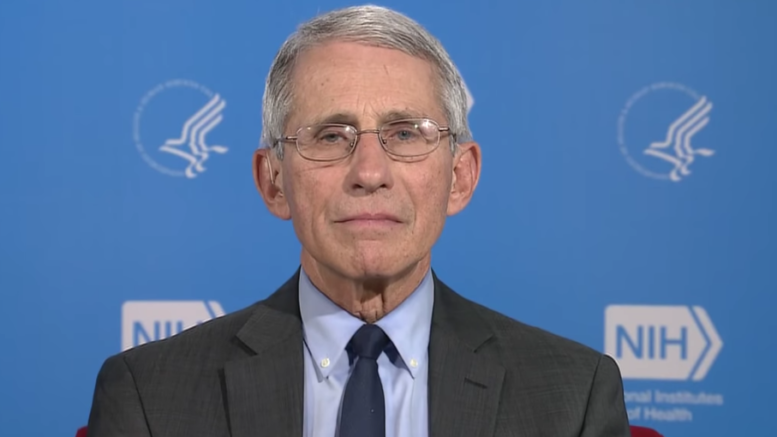 Please Share This Story!
PDF 📄
The journalist has no idea about Technocracy, but I do. Since 1932, Technocrats have displayed contempt for elected politicians and the Constitution. Fauci’s backhanded slap that Trump is an amateur layperson clearly displays this mindset.

For another example, see ‘I know, but what do you want me to do?’: Fauci’s strikingly honest review of Trump’s coronavirus response ⁃ TN Editor

Sunday on CBS’s “Face the Nation,” National Institute of Allergy and Infectious Diseases director Dr. Anthony Fauci said President Donald Trump was only a “layperson” who has hope for success with existing drugs being successful in treating coronavirus.

Fauci added he was “coming from it from a scientific standpoint.”

Host Margaret Brennan asked, “You are the leading infectious disease expert in the U.S. government. You said this week that you differed from the president in his assessment that a combination of two drugs, Hydroxychloroquine and Azithromycin, could have the outcome he described to the public possibly could. Who is the president listening to? And do you see a concern here that those drugs could become, you know, basically over-prescribed and there could be a shortage who impact people who have persistent medical issues like Lupus who need those?”

Fauci said, “There’s an issue here of where we’re coming from. The president has heard, as we all have heard, what I call anecdotal reports that certain drugs work. So what he was trying to do in the express was to hope that if they might work, Let’s try and push their usage. I, on the other side, have said I’m not disagreeing with the fact anecdotally they might work, but my job is to prove definitively from a scientific standpoint that they do work. So I was taking a purely medical-scientific standpoint, and the president was trying to bring hope to the people. I think there’s this issue of trying to separate the two of us. There isn’t fundamentally a difference there. He’s coming from it from a hope, layperson’s standpoint. I’m coming from it from a scientific standpoint.”

I would like to know how the Jesuit scientist has become the ONLY expert. I believe he is an expert in deceit, a liar, and evil! Who is he working for? Whoever pays. The side affects of these drugs they are pushing a horrible. Nausea, vomiting, head aches, loss of eye sight (which is permanent even when off the drugs) chest pain, liver damage, low blood sugar, low blood counts, weight loss, hair loss, major skin changes, heart damage, etc. Similar to the side effects that AIDS medicine caused, just think of it, and this is the same doctor who… Read more »

The course of treatment is typically seven days or less at dosages that have been shown to be safe over seventy years.

Watch the last 35 minutes for Osterholm’s startling info about the China virus factory.

Dr. Fauci is a dummy who didn’t take, seriously, his friend Michael Osterholm’s 2017 book Deadliest Enemy: Our War Against Killer Germs.
Why isn’t he responsible:
Chaos at the CDC Slowed the Early Response. https://www.propublica.org/article/internal-emails-show-how-chaos-at-the-cdc-slowed-the-early-response-to-coronavirus

Can some explain to me how Osama Bin Laden is consider evil, and was killed for being behind the killing 3,000 Americans in the 9/11 attack, but Dr. Fauci, who was instrumental in its being made by giving the Wuhan lab $3.7 million of your tax dollars to create the Wuhan Virus and cause the deaths of over 122,000 Americans, and near a half million worldwide, and somehow Dr. Fauci becomes an American celebrity and America hero.