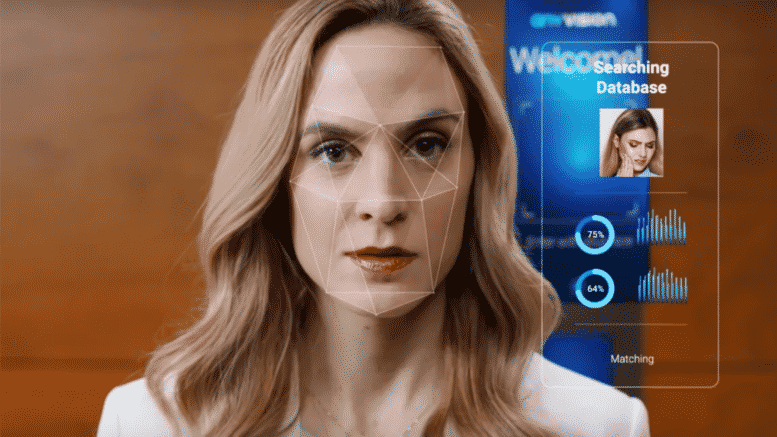 Please Share This Story!
PDF 📄
Anyvision is partnered with Microsoft to build drones capable of precise facial recognition while on-the-fly. The tech is too early for ethical or moral acceptance but the company thinks it product will son be embraced by private and public entities alike. ⁃ TN Editor

Some of the first drones with advanced facial recognition capabilities are being developed by Israeli surveillance companies, as American police consider whether they will soon be adding the controversial technology to their unmanned flying machines.

As a sign of the imminent arrival of biometric identification from the air, an Israeli startup, one previously-funded by Microsoft, has patented technologies for drone-based facial recognition. A patent application, published earlier this month, was filed by Tel Aviv-based AnyVision back in August 2019 in the U.S., detailing tech to help a drone find the best angles for a facial recognition shot, before trying to find a match for the target by referring to faces stored in a database. It was titled, “Adaptive positioning of drones for enhanced facial recognition,” and filed by current and former AnyVision employees, including three from Belfast, U.K.

The patent aims to iron out some of the complexities of identifying faces from a flying machine. Various obvious issues arise when trying to recognize someone from a drone: acquiring an angle at which a face can be properly captured and being able to get good-quality visuals whilst moving or hovering. Both are considerably harder than getting a match from static footage.

U.S. military agencies have been trying to come up with solutions, including the Advanced Tactical Facial Recognition at a Distance Technology project at U.S. Special Operations Command (SOCOM) and the Intelligence Advanced Research Projects Activity (IARPA) Biometric Recognition and Identification at Altitude and Range initiative.

But private industry may get there first. This December, it was revealed AnyVision executives had partnered with Israeli defense supplier Rafael for a new joint venture called SightX. In demos provided to Israeli media in late 2020, SightX’s small drones didn’t have any facial recognition capabilities, though executives said that feature was coming soon. It’s unclear if the tech is for the military only or if it will be sold to police agencies. Neither SightX nor Rafael responded to requests for comment.

What is clear is that the technology is ready for launch. AnyVision CEO Avi Golan told Forbes that whilst AnyVision didn’t have any in-production drones with facial recognition, they would be a reality soon. “I’m actually very glad to have a patent on that,” he said, suggesting it would work well in smart cities, where drones could provide functions beyond surveillance. He pointed to delivery drones as potentially requiring facial recognition to determine whether they’ve reached the correct buyer. Amazon has already patented similar tech, pointing to its potential plans for its experimental drone delivery fleet.

But, Golan added, though the tech exists, AnyVision is waiting on wider acceptance of both drones and facial recognition before any product is released. “I think it’s more futuristic technology, but I want to have it in the back of my pocket once it’s more accepted by humanity.” He noted that the company doesn’t currently work with U.S. law enforcement, instead choosing to work with private companies like casinos and retailers.

AnyVision has already had to fend off questions over the use of its technology. Microsoft bought a stake in the startup during a $74 million round in 2019, but last year pulled out after reports that AnyVision’s tool had been used at Israel-West Bank border crossings. Golan said Microsoft’s main reason for exiting was its inability to exert control over AnyVision. Microsoft said much the same after an audit led by former U.S. attorney general Eric Holder found it was used at the border, but discounted claims that AnyVision software had been used to surveil Palestinians across the West Bank.

I wonder how it could be possible to destroy all this crap in an elegant way.

Hover Drones can be Cloaked visually day or night.
Their Payload Toxic Nano.