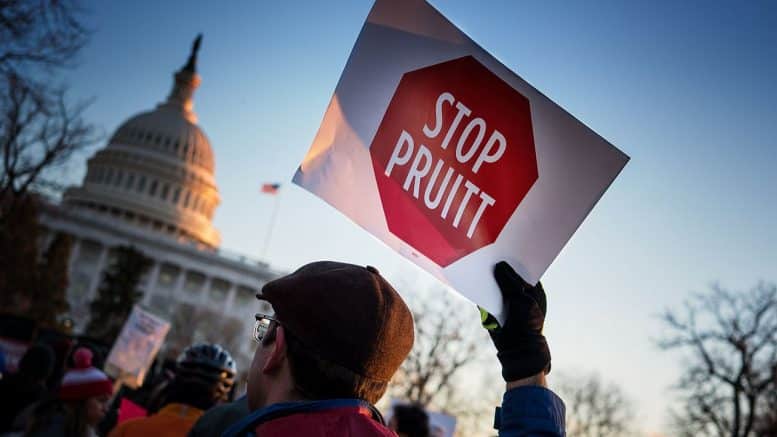 Please Share This Story!
PDF 📄
All politics aside, anyone who kicks against global warming, phony science or Sustainable Development environmentalism is certain to be attacked from every side. As Dr. Tim Ball explains, Scott Pruitt is taking flack, and it is a sure sign that he is hitting the target. According to Wikipedia, “By May 2018, Pruitt was under at least 12 separate investigations by the Government Accountability Office, the E.P.A. inspector general, the White House Office of Management and Budget, and two House committees over his spending habits, conflicts of interests, extreme secrecy, and management practices.” ⁃ TN Editor

Attacks on Scott Pruitt are Sure Sign He Is Over the Target.

Military pilots know that if the flak is heavy, it is a sure sign you are over the target. It didn’t take long after Scott Pruitt took over at EPA for the deep state bureaucrats within the department to begin leaking what they claimed were personal abuses of money, rules, and regulations. Naturally, it raised a firestorm in the media and among liberals. It is a classic example of how the technocrats respond to anyone doing things other than their way. Nobody is receiving more attention right now than Scott Pruitt and the EPA. The question is why?

The basic answer is that Obama used the EPA as the major bureaucracy to implement the industry and economy destroying policy of controlling CO2. They took the UN Intergovernmental Panel on Climate Change (IPCC) pseudoscience findings that human produced CO2 was causing runaway global warming (AGW) and converted it into policy. In the process, they bypassed the Constitutional checks and balances that require Congressional approval of policy and funding.

Obama knew from the failure of the Kyoto Protocol to receive Senate approval by a 95-0 vote that he would never get congressional approval for his energy and environment policies. He did not call the Paris Agreement a Treaty because that would require Senate approval. What got approved in Paris in 2015 was a non-binding agreement that severely punished the US. It, along with a few other developed nations, was required to put $100 billion into the replacement for Kyoto called the Green Climate Fund (GCF). Meanwhile, countries like Russia, India, and China did not have to curb their CO2 production and would also draw money from the GCF. It was a terrible deal, so, Trump correctly pulled out.

At home, Trump knew that all the draconian limits on development were achieved through the EPA. It was critical to take control of that agency quickly and early if he was going to free up energy and environmental policies and make the US economy grow.

An example of how the EPA operated under Obama was the legal manoeuvre they used to have the US Supreme Court (SCOTUS) rule that the EPA had complete jurisdiction over CO2. First, the EPA arranged for the State of Massachusetts to sue them for failure to protect the citizens of the state from ‘a harmful substance.’ The transcripts of the lawsuit show the EPA made a weak case apparently to ensure they lost, which meant they could appeal the case to SCOTUS.

Most Americans know about Civil and Criminal Law, but few are aware that a third type of law exists called Administrative Law. All laws gradually become perverted from their original purpose, but none more so than these. It is these laws that are used to prevent Trump from firing bureaucrats; look at Lois Lerner and what went on at Veterans Affairs among many other examples. Notice the contradiction that rules are made to make something function, but if you want to stop it functioning, you work to rule.

When the Massachusetts case went before SCOTUS, it presented two problems for the justices, both identified by Justice Scalia. The first was that the court system, like all aspects of the legal system, has very little expertise in matters of science. They argue that scientific disputes are my paper versus your paper and that they are not qualified to make such judgments.  I think this is unacceptable after 400 years in a post-Copernicus world during which time science became central to society. How can the law ignore so much of what goes on in society? For example, what does the court do when it is my paper against your corrupted paper? In the case of the EPA versus Massachusetts, they used bad science for a political agenda, but the courts didn’t know the difference. Shameful.

The second issue, as Scalia noted, was that they had to rule using Administrative Law. This required a judgment about jurisdiction. Did the EPA have the right to make judgements about harmful substances? The court had no choice but to rule under these laws, that the bureaucrats wrote. However, here is the trick and ultimate failure of the courts in all this. It was the EPA that designated CO2 a ‘harmful substance.’ This, despite the fact it is a harmless gas essential to flora and fauna and life on earth.

Years ago. I was invited to appear before Congress on the AGW issue. While in Washington I received a second invitation to make a presentation to the Competitive Enterprise Institute (CEI). It was there that I first met Myron Ebell who spent a career studying how regulations inhibited businesses and development. In October of 2016, before the election of Trump in November, the Trump people contacted and appointed Myron as the transition leader for the EPA. When I asked Myron how he was appointed even before the election, he said he asked the same question. The answer he got was that Trump, as a developer, knew if everything wasn’t ready to go on day one the project was in jeopardy. He told me that the amusing thing was that he and others at CEI did not think Trump would win, so they didn’t do much. Of course, they had done a great deal already and it didn’t need much to put a plan together. I then asked another question Ebell also asked, when was he going to hold Hillary accountable? The answer was another developer response. You don’t have the roofers on the site at the start. Success requires doing things in the proper sequence. First, it was essential to clear the decks of the most troubling rules and regulations, those implemented by the EPA.

Even though Myron Ebell and his group set out the strategy, it needed a knowledgeable person to implement it. That person was Scott Pruitt. A lawyer who became the Attorney General (AG) of Oklahoma had a brilliant mentor about the exploitation of climate and the environment in Senator Inhofe. When Pruitt ran for office of AG, he was shown around the state by Inhofe, and there is no doubt he learned first-hand from the one Senator who understood and fought against the AGW fiasco. Inhofe, with the help of his research assistant, Marc Morano, filed the US Senate Minority Report that drew violent reaction, which served to prove it was on target.

Nobody on Trump’s team was better prepared and more capable of implementing the new policy than Scott Pruitt. He began acting right away, and that drew a reaction from the Obama holdovers and the liberally committed deep state bureaucrats in the EPA. Pruitt survived the first salvo of charges of misuse of funds for furniture and travel. Recently, he introduced a critical policy document that said no research paper is used unless full disclosure of the data and methods are provided. The extent of Pruitt’s decree addresses all the exploitive practices of the past that allowed the EPA to act with impunity and lack of accountability. The headline,

This says it all. Promoters of AGW, including many bureaucrats at EPA saw this as a threat, yet these objectives must be at the center of any legitimate science. Failure to follow these ideals allowed the corrupted ‘hockey stick’ to sell the world on AGW. It literally rewrote climate history, a standard Marxist ploy, then those who produced refused to provide the computer code, all the data, and the statistical calculations used to create it. That is still the situation, and so the myth of AGW continues because the deceptions are still undisclosed.

The most crucial test in science involves reproducible results. To verify some theory other scientists must be able to reproduce the same results but to do that they must have access to the data and methods. These are still not fully available for the ‘hockey stick.’

Pruitt survived the early charges leaked from within the agency. Now he faces more, reported by a secretary who claims Pruitt directed her to seek accommodation for him, including buying a mattress. Trump appointed Pruitt in December 2016, but these claims came out in June 2018, a full 18 months later. Why the delay? Probably because the earlier charges failed, and the new directives threatened the deceptions of the agency.

Pruitt’s job was made easier by the advance work done by Myron Ebell. His knowledge of the law and the corrupt science combined to make him eminently qualified to turn around the one government agency most abused by Obama to bypass Congress and debilitate the US economy. Pruitt must survive this latest phony attack. He must ignore the flak and only use it as a guide to drop more bombs.