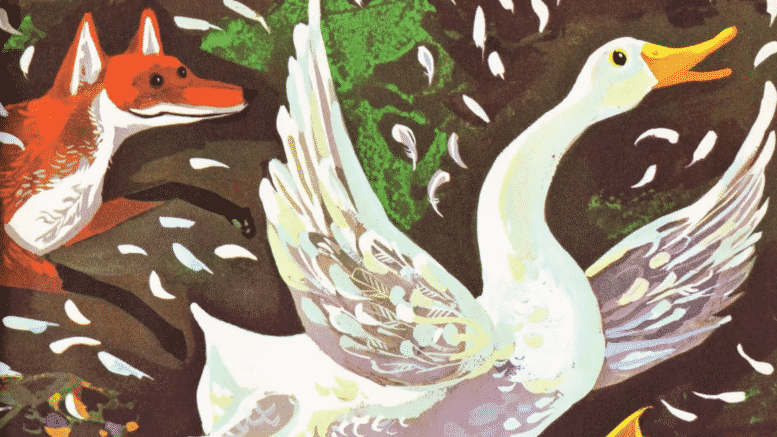 Please Share This Story!
PDF 📄
Henny Penny, aka Chicken Little, doesn’t have a monopoly on fabricated panics. The Omicron variant is a giant nothing-burger with zero reported deaths in the U.S., and yet medical Technocrats continue to cry “The sky is falling!” Big Pharma is manufacturing booster shots, which are recommended for everyone to avoid this latest pandemic threat. Alas, the clever fox. ⁃ TN Editor

Europe’s latest COVID wave appears to be slowing already, despite all this chatter about omicron overtaking delta by Christmas, as at least one British scientist has suggested it will. And in South Africa, scientists say the omicron variant isn’t causing any deaths or severe infections, in keeping with the view that the variant will likely cause more mild infections than delta.

In the US, the situation is even more subdued. While cases have seen a slight uptick over the past week, the number of deaths has remained near its lows.

Santa Clara’s Public Health Director Dr. Sara Cody said the following in response: “Although there are still many unknowns about this variant, we strongly recommend getting vaccinated and getting your booster if you haven’t already to help guard against Omicron...It is a new variant, but we know what to do, and that’s to continue with all our layers of protection: vaccinate, boost, mask, ventilate, distance, and test often.”

CDC Director Rochelle Walensky, the bureaucrat who coined the term “pandemic of the unvaccinated” (only to see the virus cut through vaccine protections like butter), confirmed Friday afternoon that the US has only seen one patient hospitalized due to omicron, and that nearly all cases of the variant found in the US so far have been notably mild.

Does that mean the CDC will still push for expanding the definition of “fully vaccinated” to include those who have gotten the booster? It’s too soon to tell…but that’s where things seem to be headed.

But while Walensky just yesterday spent her time urging all Americans as young as 16 to get their booster shots as soon as they are able, the CDC director’s tone was notably more restrained on Friday, when the agency said the first batch of cases were mostly mild, with most patients reporting symptoms such as a cough or a runny nose.

Omicron has now been detected in at least 22 states, according to CDC data shared with the media. And although health experts stress it’s still too early to draw any strong conclusions on how the variant will spread in the country, Walensky admitted that the reaction appears to be mild so far. The agency elaborated on its findings in a 5-page report looking at 43 people in the US who have tested positive for the omicron variant.

That’s not all: the Epoch Times reported Friday that the WHO had finally returned its requests for comment, and confirmed that the agency couldn’t specify a single death that’s attributable to omicron.  And while South Africa has seen a sizable uptick in hospitalizations over the last couple of weeks, it’s too soon to tell if this is due to omicron, delta or other variants.

According to WHO, “for Omicron, we have not had any deaths reported, but it is still early in the clinical course of disease and this may change.”

Circling back to the CDC report, more than half of the patients infected were young, between the ages of 18 and 39, and roughly 75% were fully vaccinated – including one-third who had also received a booster shot. Six cases had a previously documented COVID infection, and one-third of the infected had recently traveled internationally.

While we agree it’s not a large number, the group is roughly equivalent to the size of some preliminary studies carried out by drug companies and governments. One obvious weakness in the data is the fact that only a handful of patients over age 65 were included in the sample.

Still, the findings are in line with what South African officials are saying.

The findings were greeted by a chorus of doctors and experts arguing that it’s too soon to say anything definitive about omicron.

“It may be a more mild variant but we just don’t know yet. It’s too soon,” said Dr. Isaac Bogoch, an infectious disease specialist at the University of Toronto. Right now, “if you’re vaccinated, chances are you’re going to have a milder course,” he said.

But if that’s true, then why is everybody panicking?

They have to get those deaths rolling in somehow, Patrick!!

I knew from the beginning they (the state government, local government, institutions and eventually federal government) shut down the schools, businesses, and churches this was a hoax, a plandemic. The same who urge everyone to continually take the “vaxx” but forcibly deny and persecute those wishing to take the Bread of Angels. No one should seriously give any thought to what the “authorities” say or order us non-essential peasants to do anymore! We are at war and the consequences will be eternal, you will not only lose your life but your immortal soul as well if you make the wrong… Read more »

I heard a doctor state a couple of months ago that mutated viruses are weaker than the original ones. Not stronger. That seems to be the case from what I’m hearing about covid thank God. I also heard another doctor state that viruses are made for vaccines. Not the other way around. Thank God that cooler heads seem to be prevailing somewhere in the covid tyranny. Especially amongst some judges as it seems to me. I believe that more people would face unjustifiable financial and legal suffering without judicial and divine intervention. Some already have due to unjust covid mandates.… Read more »

Think I made a mistake while ago on the Zelinko covid protocol. Think I said Vitamin C, D and Zinc. The protocol is Vitamin D, Zinc and Quercetin. Don’t recall the exact dosages. Think I get enough every day.