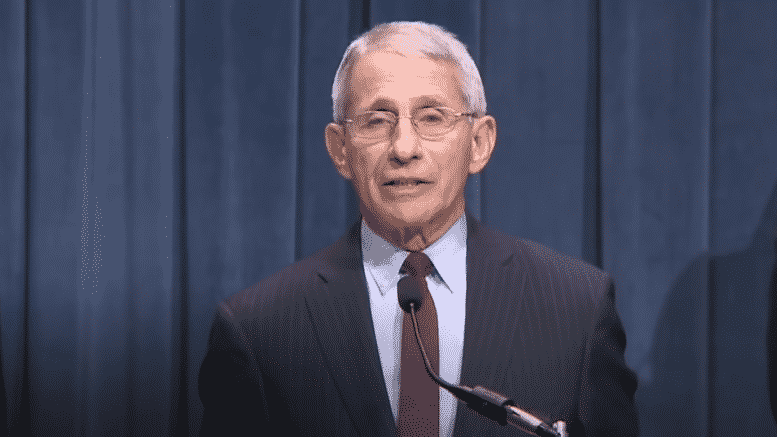 Please Share This Story!
PDF 📄
Dr. Anthony Fauci is a United Nations wolf in sheep’s clothing telling America why it is so important to save lives from the dreaded COVID-19 virus while pandering for the most radical parts of United Nations agenda for the world. That is, Sustainable Development, aka Technocracy.

In his paper, EmergingPandemicDiseases:HowWeGot toCOVID-19, he wrote the following paragraph:

Living in greater harmony with nature will require changes in human behavior as well as other radical changes that may take decades to achieve: rebuilding the infrastructures of human existence, from cities to homes to workplaces, to water and sewer systems, to recreational and gatherings venues. In such a transformation we will need to prioritize changes in those human behaviors that constitute risks for the emergence of infectious diseases. Chief among them are reducing crowding at home, work, and in public places as well as minimizing environmental perturbations such as deforestation, intense urbanization, and intensive animal farming. Equally important are ending global poverty, improving sanitation and hygiene, and reducing unsafe exposure to animals, so that humans and potential human pathogens have limited opportunities for contact. [emphasis added]

This is plain evidence that Fauci is an agent for the United Nations and that he is a self-professed “social engineer” who wants to rebuild the “infrastructures of human existence.” Why should Fauci’s phony propaganda be so hard for America to understand? It’s because Technocrats have created and leveraged fear to the whole world, making populations wide-open to their ‘suggestions’. ⁃ TN Editor

I have never been a singer in the anti-Dr. Anthony Fauci chorus. I always admired his work in the 90s to bring the HIV catastrophe to heel and thought his early efforts as Director of the National Institute of Allergy and Infectious Diseases, advising President Trump on fighting the COVID crisis, provided a vital public service to our country.

But of late, I had been having second thoughts. I am mildly put off by Fauci’s relishing embrace of worldwide celebrity. I thought it a bit frivolous, for example, his agreeing to be interviewed for a cover story in the fashion magazine, In Style.

And it was certainly an eye-popping obeisance to popular culture when the man—who said we will have to give up handshaking forever—benignly blessed in a Vanity Fair interview (of course) “asymptomatic strangers” hooking up for sexual liaisons using the dating app Tinder.

Still, those were minor irritations. Nobody is perfect, after all. When the beautiful people decide to make one an icon, resistance is futile.

But now, Fauci has crossed a line that should sound the alarm—audaciously declaring that combatting infectious disease requires the mindboggling task of “rebuilding the infrastructures of human existence.” Not only that but he opined that accomplishing these top-to-bottom “radical changes” requires “strengthening the United Nations and its agencies, particularly the World Health Organization.”

Articles in Cell (and its ilk) mostly focus on important but arcane technical issues of science and medicine. But with increasing frequency, such journals have lately pushed ideology too—usually promoting left-wing and internationalist public policy prescriptions, as Fauci and Morens did in Cell.

Fauci and Morens’ prescription should give every lover of liberty and national sovereignty great pause. To prevent future pandemics, the authors argue that virtually everything in society will have to be transformed, “from cities to homes to workplaces, to water and sewer systems, to recreational and gatherings venues.”

The scope and breadth of their ambition is stunningly hubristic. “In such a transformation,” they write, “we will need to prioritize changes in those human behaviors that constitute risks for the emergence of infectious diseases. Chief among them are reducing crowding at home, work, and in public places as well as minimizing environmental perturbations such as deforestation, intense urbanization, and intensive animal farming.”

Oh, is that all? No, as a matter of fact, it is not. The authors quickly add: “Equally important are ending global poverty, improving sanitation and hygiene, and reducing unsafe exposure to animals, so that humans and potential human pathogens have limited opportunities for contact.” Holy cow!

Think about what all of that would take! At the very least, the gargantuan task would require unprecedented and intrusive government regulations and the transferring of policy control from the national to international level—nothing less than an international technocratic and authoritarian supra-governing system—with the power to direct how we interact with each other as family, friends, and in community.

This hyper-state would have to control how the economy operates, where we could build factories and plow farms. It would also determine how and where we live, what we eat, and permanently dictate when and if we can travel. And think about the cost and the means it would take to break inevitable popular resistance. No thanks!

Dr Fauci is a hardcore career bureaucrat who found himself thrust into the lime light. Having achieved fame (and fortune?), Fauci aspires to the throne. It’s time to retire.

You might want to dig a lil deeper with FRAUD-Fauci. HE was the cause of the AIDS epi; and MUCH more (pertaining to AIDS).

Fauci has no business being on the front line of any issue, it’s time for this globalist to ride into the sunset.

ANY government employee who takes orders from a FOREIGN GOVERNMENT (in this case, the U.N.) is GUILTY of TREASON!!

Dr. Fauci is 79 years old. His days are numbered. What does he think he is going to gain in the time he has left by pushing this agenda. Or is he expecting to live forever? There is no fear of God before his eyes, and he clearly doesn’t believe there is an eternal judgment. His doom is sure and his fate with be with his father the devil.

He is a Roman Catholic Jesuit, he believes in purgatory. https://bereanbeacon.org/dr-fauci-and-pope-francis-jesuit-birds-of-a-feather/

No more MODELS!!! This is what started this whole fiasco. Haven’t we learned anything?.

He should be fired and deported to Europe.

PRISON IS MORE FITTING FOR FAUCI!!

Hi Patrick, with respect, I would propose something you must have missed in the last decades: Please watch one of the best documentaries ever made: THE HOUSE OF NUMBERS. This might change your idea about Dr. Fauci as well as AIDS AND the fake COVID p(l)andemic. To be honest, I was a bit shocked about your view of Fauci which was (is?) much too positive…. What about his involvement in corona virus research in the Wuhan lab, etc.? I can only suspect further knowledge gaps…. or brain wash(? no that can’t be in your case….). Please also watch the Plandemic… Read more »

Matteo. I did not write this article. It was written by Wesley J. Smith via The Epoch Times

Why would we trust such a despicable loser as Fauci. He hcas been part of the problem for over 45 years. Remember the 1976 Swine flu fiasco? Fauci was behind that vaccine and the ensuing fire storm of GB, strokes and deaths.

Fauci is part of the Soros cult of abject world communism, with China owning the planet.

It also means death for many, many animals, no more farms/ranches, and the end of us having pets anymore. ‘For the good of the planet’, I suppose. I don’t need to tell people here how much energy is burned so the techno mafia can mine our data, to learn how to control us.

AKA: The Great Rese, AKA, New World Order, coming to a world near you in January 2021.

Dr. Fauci is now transitioning from being a Quack to becoming Dr. Totter Hyde, a satanic doctor who will force medical experiments on people by government force without their permission to be killed off.