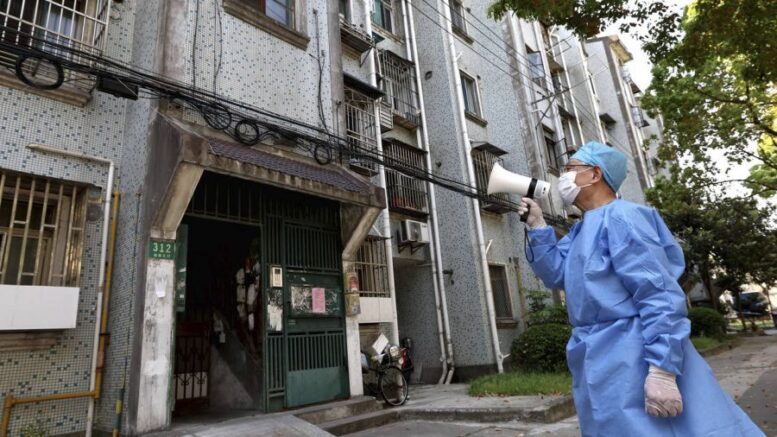 Please Share This Story!
PDF 📄
According to Dr. Anthony Fauci, the head of NIH, the real reason for lockdowns is not to contain the spread of a virus, but rather to force people to get vaccinated. This is a blunt admission on his part, but it suggests that the “great panic of 2020” was less about a virus and more about taking EUA injections. ⁃ TN Editor

“Early on, [China] was saying — and I think accurately — that they were doing better than anybody else.” pic.twitter.com/yM4WYAIw34

Appearing on MSNBC Wednesday, Anthony Fauci let the truth about lockdowns slip… that they are theatre designed to scare people into getting vaccinated.

When asked by host Andrea Mitchell about the unfolding lockdown hellscape in China, Fauci actually praised the Communist government’s actions.

Fauci stated “China has a number of problems, two of which are that the complete lockdown, which was their approach, a strictest lockdown you’d never be able to implement in the United States. Although that prevents the spread of infection, I remember early on they were saying, and I think accurately, they were doing better than anyone else.”

Then came the kicker as Fauci declared “You use lockdowns to get people vaccinated so that when you open up, you won’t have a surge of infections.”

Completely ignoring the concept of natural immunity, Fauci added “Because you’re dealing with an immunologically naive population of the virus because they’ve not been exposed because of the lockdown.”

He went on to state that China’s vaccines are not good enough.

“The problem is the vaccines they’ve been using are not nearly as effective as the vaccines used in the United States, UK, EU, and other places. So, they don’t have the degree of protection that’s optimal,” Fauci claimed.

He continued, “Also, they have a lot of their older population, which are the most vulnerable among us, and so, there’s a double negative there. One, they don’t have people who are protected, and B, the people who need it most, are not getting the vaccination. That’s the source of the problem in China.”

Fauci: “You Use Lockdowns To Get People Vaccinated” - Wild Sage News

I’ll die before I take the vaccines and someone will die trying to give me a vaccine.

After reading Bobby Kennedy’s book on Fauci, you begin to wonder if they are following the same logic. HIV is to AZT as COVID is to Remdesevir – meaning the deaths of the treatments were being blamed on the disease. Much like the vaccines themselves are also doing along the lines that the treatment is the disease.

Exactly right in your assessment about the covid lockdowns Patrick. I’m sure that Fauci, most politicians and the ruling class know their biological weapons, including so-called vaccines and medications are what caused covid and dozens of other autoimmune diseases in the first place. There are people alive who don’t go to doctors or take medications unless our lives depends on it. And yet we are no worse off, and in some cases better off than people who practically live in doctors’ offices. Deceiving, mandating or forcing people to take drugs or vaccines won’t in and of itself generate any trust… Read more »

“The problem is the vaccines they’ve been using are not nearly as effective as the vaccines used in the United States, UK, EU, and other places. So, they don’t have the degree of protection that’s optimal,” Fauci claimed.

He’s saying that the Western kill-shots are more effective at Democide and injuring the public than China’s CCP kill-shots?

PROTECTION is OPTIMAL worldwide when YOU, Foochie, no longer exist. Leave, go away, get out!

You have to wonder if sometimes fowltchee’s bumhole sometimes gets jealous of the 💩 that comes out of his mouth.