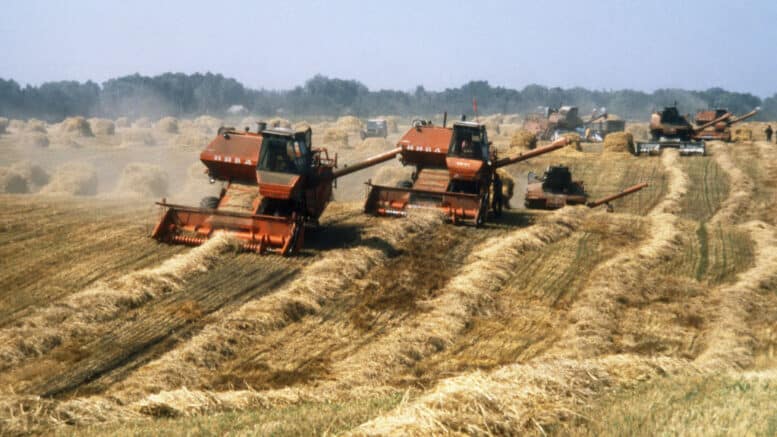 Posted By: Maartjie Wijffelaars and Erik-Jan van Harn of Rabobank, via ZeroHedge April 15, 2022

Please Share This Story!
PDF 📄
The destruction of the global supply chain continues unabated. This is essential to reduce the global economy to ashes prior to “building back better” after the Great Reset. The WEF’s new world order will have a radically redesigned supply chain as well as a redesigned monetary system; it will all be digital and based on blockchain. ⁃ TN Editor

The Ukraine war has sparked another supply chain crisis, just as pandemic-related disruptions had started to ease.

Will we ever catch our breath?

Just as supply chain issues caused by the pandemic were starting to ease (Figure 1), the next crisis has presented itself. The war in Ukraine is making clear that large parts of the world depend on Russia, Ukraine and Belarus for basic necessities such as food, energy and other commodities.

Trade with Russia, Belarus and Ukraine (referred to as the warzone in the remainder of this piece) has come close to a halt due to a wide range of sanctions, self-sanctioning (mainly by western companies), and strongly disrupted production and transport in Ukraine. Although the overall share in world trade is limited for those countries, trade disruptions can have large implications for both specific firms and industries as well as entire economies. Disruptions (both actual and feared) to imports from the warzone will hurt the EU more than less exports to the warzone. Not only because the warzone accounts for a larger share in the EU’s imports than exports (Figure 2), but especially because less imports of commodities and intermediate products can have knock-on effects on multiple production processes in the EU.

In Part I of this research note we will zoom in on the EU’s direct and indirect dependence on non-food commodities and goods imported from the warzone. We will assess which EU industry subsectors are most vulnerable for the disruptions caused by the war. In Part II we compare the vulnerability of the largest Eurozone countries.

The revival of supply chain disruptions

On top of oil and gas, Russia, Belarus and Ukraine are producers of a number of key commodities that are used in everyday items or in the production thereof– such as pig iron, palladium and neon. Next to commodities, certain industries also depend on these countries for intermediate products. A striking example is the dependence of several German car factories on certain car parts produced in Ukraine. This has already led to the closure of several German car factories.

We can split up the effects on supply chains into first order and second order effects. First order effects are caused by a reduction in direct trade between the warzone and the European Union. There are two types of second order effects. The first is less trade between the warzone and third countries that results in fewer supply of products to the EU from those third countries. The second  is less EU production of intermediate goods due to higher energy prices -or even shortages- as a result of the war and, consequently, less production of downstream goods for which these intermediates serve as inputs (Figure 3).

It’s not enough that Klaus Schwab and his type desire that people starve, be homeless and live in poverty. We are expected to forfeit our humanity and salvation by becoming transhumans, and forfeit good health too.