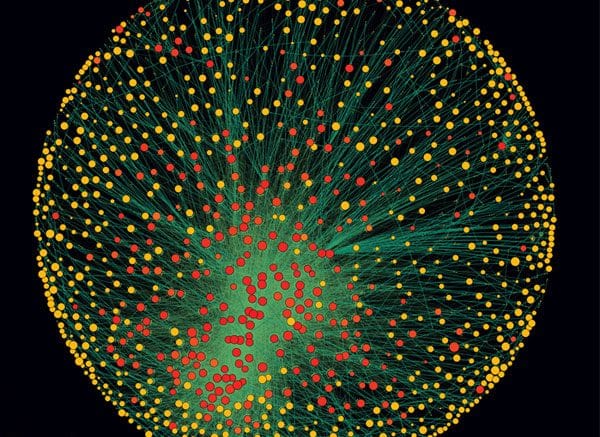 This 2011 study examined connections between 43,000 transnational corporations and its conclusion is that a relatively small group of companies control just about everything. This is where the seat of Technocratic strategy can be found.  ⁃ TN Editor

As protests against financial power sweep the world this week, science may have confirmed the protesters’ worst fears. An analysis of the relationships between 43,000 transnational corporations has identified a relatively small group of companies, mainly banks, with disproportionate power over the global economy.

The study’s assumptions have attracted some criticism, but complex systems analysts contacted by New Scientist say it is a unique effort to untangle control in the global economy. Pushing the analysis further, they say, could help to identify ways of making global capitalism more stable.

The idea that a few bankers control a large chunk of the global economy might not seem like news to New York’s Occupy Wall Street movement and protesters elsewhere (see photo). But the study, by a trio of complex systems theorists at the Swiss Federal Institute of Technology in Zurich, is the first to go beyond ideology to empirically identify such a network of power. It combines the mathematics long used to model natural systems with comprehensive corporate data to map ownership among the world’s transnational corporations (TNCs).

“Reality is so complex, we must move away from dogma, whether it’s conspiracy theories or free-market,” says James Glattfelder. “Our analysis is reality-based.”

Previous studies have found that a few TNCs own large chunks of the world’s economy, but they included only a limited number of companies and omitted indirect ownerships, so could not say how this affected the global economy – whether it made it more or less stable, for instance.

The Zurich team can. From Orbis 2007, a database listing 37 million companies and investors worldwide, they pulled out all 43,060 TNCs and the share ownerships linking them. Then they constructed a model of which companies controlled others through shareholding networks, coupled with each company’s operating revenues, to map the structure of economic power.

The work, to be published in PLoS One, revealed a core of 1318 companies with interlocking ownerships (see image). Each of the 1318 had ties to two or more other companies, and on average they were connected to 20. What’s more, although they represented 20 per cent of global operating revenues, the 1318 appeared to collectively own through their shares the majority of the world’s large blue chip and manufacturing firms – the “real” economy – representing a further 60 per cent of global revenues.

When the team further untangled the web of ownership, it found much of it tracked back to a “super-entity” of 147 even more tightly knit companies – all of their ownership was held by other members of the super-entity – that controlled 40 per cent of the total wealth in the network. “In effect, less than 1 per cent of the companies were able to control 40 per cent of the entire network,” says Glattfelder. Most were financial institutions. The top 20 included Barclays Bank, JPMorgan Chase & Co, and The Goldman Sachs Group.

John Driffill of the University of London, a macroeconomics expert, says the value of the analysis is not just to see if a small number of people controls the global economy, but rather its insights into economic stability.

Concentration of power is not good or bad in itself, says the Zurich team, but the core’s tight interconnections could be. As the world learned in 2008, such networks are unstable. “If one [company] suffers distress,” says Glattfelder, “this propagates.”

Interestingly, the “complex system experts” seem to think that stabilizing this economic network would be a good thing. Isn’t this an example of the tail wagging the dog? Do they not think that admitting the possibility that a smarter company run by smarter people might emerge at some indeterminate point in the future would be a necessary condition for free enterprise? Is the hierarchy they want to stabilize intended to express the working of an open, free economic system or the continued dominance of the status quo? If the latter, will the best products and services have a chance to… Read more »