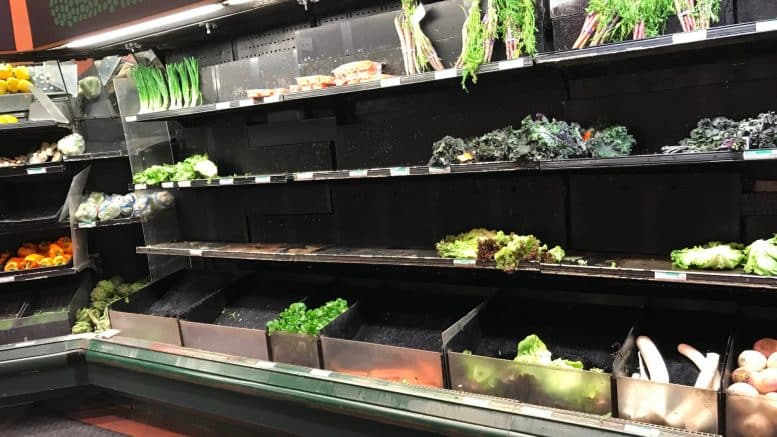 Technocrats love efficiency and just-in-time supply chains to deliver products to consumers, but Whole Foods has gone overboard, resulting in empty shelves for shoppers. Employees describe the inventory system as ‘militaristic’, sending morale into the doldrums. The fact that retail disrupter Amazon recently bought Whole Foods has only exacerbated the problem. ⁃ TN Editor

Many customers are blaming Amazon, which bought Whole Foods in August for $13.7 billion. Analysts have speculated that the shortages could be due to a spike in shopper traffic in the wake of the acquisition.

But Whole Foods employees say the problems began before the acquisition. They blame the shortages on a buying system called order-to-shelf that Whole Foods implemented across its stores early last year.

Business Insider spoke with seven Whole Foods employees, from cashiers to department managers, who asked to remain anonymous for fear of retribution.

But its strict procedures are leading to storewide stocking issues, according to several employees. Angry responses from customers are crushing morale, they say. (Many of the photographs in this story were provided to Business Insider by customers.)

“At my store, we are constantly running out of products in every department, including mine,” an assistant department manager of an Illinois Whole Foods told Business Insider. “Regional and upper store management know about this. We all know we are losing sales and pissing off customers. It’s not that we don’t care — we do. But our hands are tied.”

Whole Foods did not respond to several requests for comment on this story. The company’s executives have described the changes as cost-saving, and employees acknowledge that they have helped reduce food spoilage in stock rooms.

But even those who agree the company needed a better system to reduce losses and waste say it has gone too far.

One of those requirements, they say, has led to a dramatic reduction in Whole Foods stores’ so-called back stock, the products stored in back rooms until they are needed on store shelves.

“The system is now set up to pretty much only have enough product to keep the shelf full and no extra,” an employee of a store in Sacramento, California, told Business Insider. She said her department’s back-stock area was now 25% of the size it was before the implementation of OTS.

An employee of another store said the seafood department, which once had a giant freezer to store extra inventory, was now sharing one with the meat department.

“Last week, we ran out of onions and potatoes twice,” an employee of a Brooklyn Whole Foods store said. “Entire aisles are empty at times.”