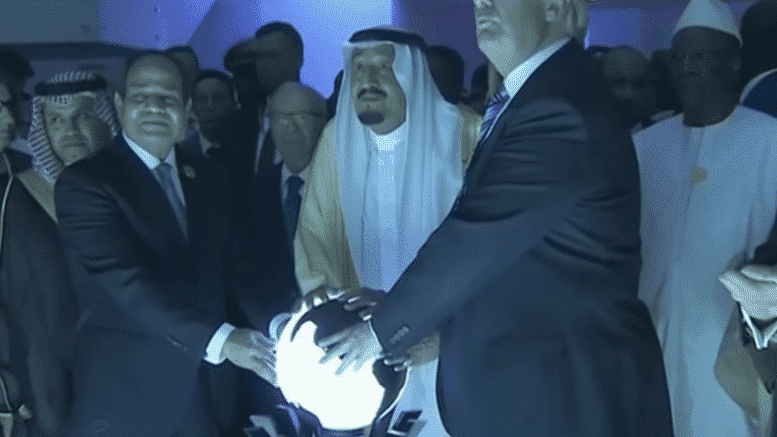 Technocrats,  those dysfunctional information pigs, are emerging in the Trump Administration as key players and orchestrators of technocrat policy. This is the clear and present danger that I have warned against for years. Regardless of which sect a Muslim belongs to, the Koran pointedly instructs every follower to wage jihad and convert the world to Islam. Instead of confronting and combatting them, Trump is deepening the U.S./Saudi partnership that has already endured for decades. There is one glaring problem with this scenario: Will the U.S. intelligence machine share intel on U.S. citizens with Saudi Arabia? ⁃ TN Editor

On May 23, 2017, the House Intelligence Committee held another hearing concerning the alleged Russian hacking of our election system which really isn’t about hacking, it’s about Russian “active measures” which really means disinformation and influence operations. Of course as a citizen researcher/sort-of-journalist, my response is that the Russians don’t need to engage in disinfo in the U.S., our own mainstream media does that job. If Russian media does counter messaging to our mainstream disinfo operations, then Russian information must be good. It would be nice if it was that simple but it isn’t. The apparent objective of the Infowar is Infochaos.

The best question of the day during the hearing goes to Congresswoman Jackie Speier (D-CA). She asked Brennan “Are Russian Oligarchs encouraged to invest in the United States”? Listen to what Brennan says – and watch his body language.

It stretches credulity to the limit to believe that the director of the CIA is unaware of the EB-5 visa program and that 109 visas were issued for Russian oligarchs especially in view of his promotion of the idea of Russian influence operations in our election system.   One might be tempted to think that because he was the Director of the CIA that he might not be aware of all U.S. programs for foreigners – except that the legislation that authorized EB-5 visas was passed in 1990 and in the last decade or so, they’ve been the subject of news stories because these visas actually sell American citizenship in exchange for investment in the United States.  If the CIA doesn’t monitor that program, then exactly what is it that they do because it can’t have anything to do with the security of the United States.

And actually, it does seem to be true that the CIA has nothing to do with the security of the United States.   Brennan is what I would call, an IT guy – if not directly, then as a director of IT projects and systems.   As you can see in this video clip of Brennan, he mentions the “system of systems” and “international architecture”.  System of systems is Total Information Awareness.

The TIA system has access information for all systems that the intelligence agencies can access – either through the front door or the back door.  As the controllers of the “system of systems”  they can define portals for sharing with other entities such as the directors of intelligence operations that were on the stage with Brennan.

The fatal flaw for the information pigs is that they think they can form functionalalliances across governments because they all have a mission of “security”.  Call me crazy but I don’t think that Saudi Arabia’s idea of security is the same as the United States.  Nor do I think the Communist Chinese idea of security is the same as ours.   John Brennan and his operation to link information systems across borders by function says to me that they “forgot” their purpose.  Systems should support an operation – not become the operation.  When you have IT people who have taken control of the operation rather than supporting an operation, then you have a germinating totalitarian system.

By now everybody except the mushrooms has seen the images and/or video of Donald Trump putting his hands on the glowing orb (earth) to turn on the systems of the new Global Center for Combating Extremist Ideology in Riyadh.

CNN’s video of the event made a joke out of it without even hinting at the significance of the center.  The Washington Post (WP) produced an excellent, brief video capturing the essence of what the Center does.  The following is the most important snippet from the WP video.

The Saudi Gazette had an article about the center.  The first thing I noticed was that somebody turned Trump into a faceless cartoon image.   And no, it is not the lighting.  Notice how many flags are in the background.  This is a regional center – Islamic which to my way of thinking means that this is the Islamic State.

The following are significant excerpts from the Saudi Gazette article:

Trump and a number of Muslim leaders visited the new Global Center for Combating Extremist Ideology, the heart of which is a giant wall, filled with screens displaying real-time online extremist activity.

“We are the second army after the US military in the international coalition against terrorism. The efforts will be an effective partnership between the Islamic world and the West in general to combat terrorism,” he said.

The center is established as a result of the international cooperation in facing the extreme ideology leading to terrorism, the world’s first common enemy.

– It was founded by a number of countries who chose Riyadh as its headquarters in confronting extreme ideologies by monitoring and analyzing it, to confront and prevent it, cooperate with the governments and organizations to prevail and promote a culture of moderation.

– The center was established on three basic pillars: confronting extremism by the latest intellectual, media and numerical methods and means

– The center has developed innovative techniques that can monitor, process and analyze extremists’ speeches with high accuracy, all phases of data processing and analysis are done in no more than six seconds once the data or comments are posted on the Internet, allowing unprecedented levels of facing extremist activities in the digital world.

– The importance of establishing the center lies in that it is the first time that the world countries seriously come together to face the threat of extremism, which poses a threat to the communities and endanger them, therefore it is the center’s duty to fight together to win and to be able to protect people from its danger.

– The selection of the (12) representatives of the Board of Directors from states and organizations; reflects the independence of the center’s work, which is characterized by a governance system that applies international management best practices of major international organizations, which allows neutrality, flexibility, efficiency and transparency to fulfill the Center’s functions and achieve its objectives.

Monitoring of the Internet is just one small subsystem in the systems of Total Information Awareness – the System of Systems.  The purpose for this article is to show the cross-border “partnership” with the Saudis – and the British – and the French – and the Australians, etc. etc.  Regardless of their propaganda that they are simply monitoring for “extremism” – I would ask you to think about “extremism”.  What does that mean?   It depends on who says it right?  In the United States, the Southern Poverty Law Center (SPLC) is hooked into the Department of Homescam Security.  Who does the SPLC? define as an extremist?  Everybody who is a red-blooded American patriot that’s who.

Going back to the hearing in which John O. Brennan testified, when he said he didn’t know anything about the EB-5 visas and whether or not Russian oligarchs were using them to invest in this country, my almost instantaneous reaction was that the EB-5 regional centers must be CIA operations and they are using foreign money to build the fusion center network in the United States.   Why would they do that?  Because in 2003, the Congress cut off funding for Total Information Awareness.  Here is what I wrote about it in 2007 keeping in mind – I had only a segment of the puzzle put together at that point.  We are now another decade into it:

In 2003, the Congress eliminated funding for the TIA project but that didn’t stop anything. DARPA’s project just metastasized. Part of the project moved deeper into the Intelligence agencies, part of it moved to the Homescam Security Department (DHS) under the name of ‘Homeland Security Advanced Research Project Agency (HSARPA). Part of it was already in the Transportation Department and was funded as “Smart Highways and Vehicles” with related systems in legislation as early as 1991.

Given the strategy of the assault on American sovereignty, it would seem that we need new laws to deal with the technocratic treason.  The obvious first new law would make fusing with the enemy a crime.  Who is the enemy?  The enemy has to be all countries because the nature of the strategy is to fuse the administrative layers of government – across borders.  It isn’t that any single country is the enemy.  It’s that the cross-border administrative layer in all governments is the enemy of all the people everywhere.