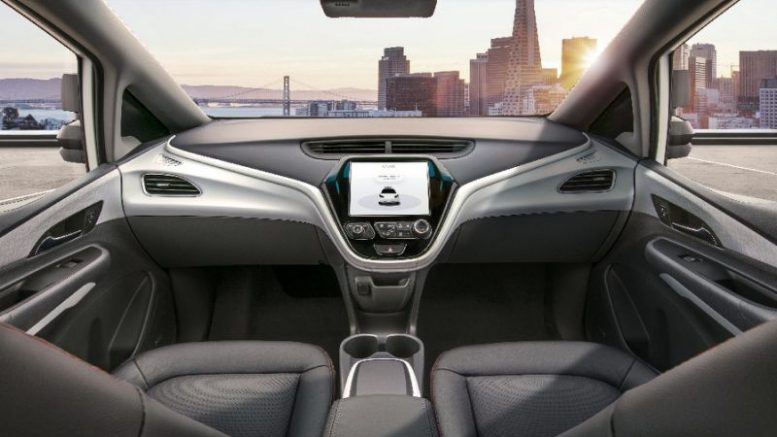 Technocrats invent because they can, not because anyone wants what they invent; in this case, GM is going all out for autonomous autos with no human controls. The vision for autonomous vehicles will ultimately destroy the entire network of dealerships across the nation. ⁃ TN Editor

“It is now coming to the stage with the rapid advancement of self-driving technology that this request is now a reality,” Chao said on the sidelines of the Detroit Auto Show.

“So we will view the petition carefully and responsibly.”​

GM on Friday unveiled the Cruise AV, an autonomous vehicle with no steering wheel or pedals, announcing it had asked the National Highway Traffic Safety Administration to exempt it from a number of federal standards that cannot be met with a driverless car.

GM executives have said they planned to introduce a large-scale fleet of self-driving taxis by 2019, a timeframe some analysts consider ambitious.

GM released images of the Cruise AV and video of the interior with a strikingly spacious windshield devoid of a steering wheel.

“It’s quite a striking image when people see it for the first time,” GM president Dan Ammann told AFP on the sidelines of a GM event Saturday.

“I think people will want to engage with the technology and understand it and experience it,” Ammann said.

“But I think what’s really most powerful about what the technology can offer is an increase in safety on the road. And once people understand that and see and experience it, we think the adoption will be there.”

Please back up the assertion that these will destroy the dealer network. I bet they work great in a crowded supermarket parking lot, LOL.

The idea is to take control away from you. You don’t drive, you ride, and you go where the car allows you to go. It’s not too far from public transportation. Agenda 21 behind it all, of course.

I followed the link to the full atricle at Yahoo. The overwhelmingly negative and hostile nature of the comments there to this technology gives me hope.