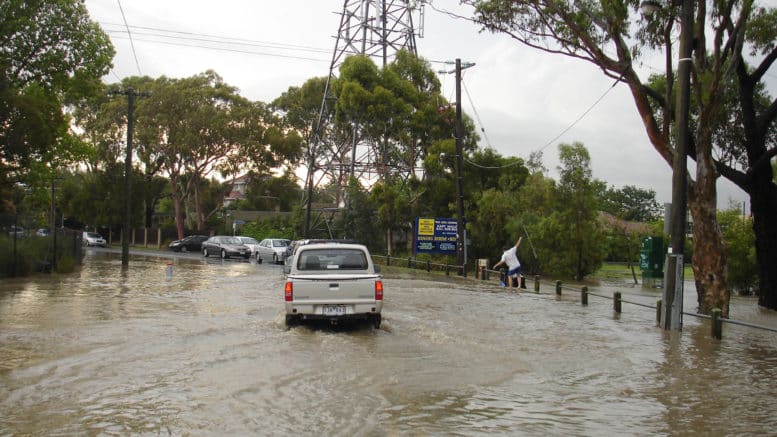 Please Share This Story!
PDF 📄
Goldman Sachs is pitching its own services as the report concludes, “urban adaptation will likely need to draw on innovative sources of financing.” The global elite see only green (pun intended) by rebuilding everything on earth.  ⁃ TN Editor

Goldman Sachs released a report on the effect of climate change on cities around the world and the results made for grim reading.

Cities generate about 80% of global GDP and are home to more than half of the world’s population, a share that Goldman says, citing the United Nations, is projected to reach two-thirds by 2050. About 40% of the global population lives within 100 kilometers of a coast, it says, and 1 in 10 live in areas less than 10 meters above sea level.

Goldman highlighted three cities which would be subject to those storm surges and in the future could face harmful flooding — New York, Tokyo, and Lagos. Miami, Alexandria, Dhaka, and Shanghai face major flood risks due to being less than 11 meters above sea level.

Goldman’s researchers said that when starting the study they took a broad consensus that human activity, namely emission of greenhouse gasses “is causing the earth to warm in ways that are affecting the climate.”

Natural ecosystems would be damaged, and risks to human health would rise, as well as pressures on food and drinking water.

Agriculture would also be massively affected: “Warmer temperatures and shifting precipitation patterns could reduce yields and nutritional quality as well change growing seasons and agricultural zones around the world.”

Changing from industrial farming to regenerative farming would go a long way towards the flooding, and fire problems. Also, ground water would be replenished. Soil would be replenished, and the harmful contaminants going into the waterways would decrease.

Having less concrete on the ground, with more plant cover is more cooling. Planting fruit bearing trees and plants have a cooling effect.

Look up permaculture and regenerative farming. This should be utilized both with farms and within housing developments and cities. GREEN UP the planet, instead of concreting it.

No doubt, some of your ideas are excellent, Sally. And organic farming has been rising constantly over the last three decades. However, Permaculture farming requires enormous labor demands. Today’s farming, based on the population, would not benefit from such a change. Permaculture, as set out by Mollison and Holmgren, is more suited to homesteads and very small farms who deliver targeted specialty goods to restaurants and local markets. Why? Large scale, industrial farming could not be successfully conducted using Permaculture practices because of the human labor requirements. Organic farming can be, most certainly, conducted on a large scale and, I… Read more »

Oh yeah. Goldman Sachs (GS) is truly the institution we should all listen to and believe without question? Don’t know about others but I certainly haven’t forgotten their last public appearance (2008-09) alongside the banks and the subsequent fleecing of America that played out to the tag line of–“If we don’t bail out the banks they will all fail and American will be destroyed!” Not unlike the Catholic Church they are a house of criminals–liars and thieves bent on domination through the monetary system. If no one remembers I will remind–when reports emerged about GS practices they showed a poisonous… Read more »

If global warming is truly a threat and needs to be addressed Asap, then shut down all electrical technologies!!! Shut down robots and automation in all manufacturing plants. Put human labor back on top of the list for all the much needed increasing population job growth!!!