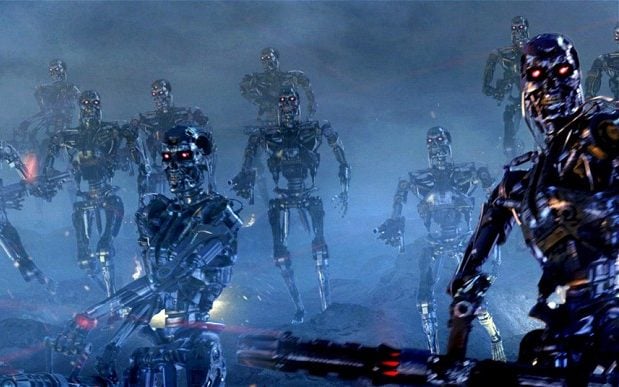 Posted By: Robin Pagnamenta via The Telegraph September 26, 2019

Please Share This Story!
PDF 📄
A new global arms race? Forget nukes, it’s killer robots. Any nation or terrorist group with a screwdriver can join the melee to build killer robots. To the Technocrat mindset, it’s a much more efficient way to destroy things and kill people. ⁃ TN Editor

The rise of killer robots is now unstoppable and a new digital Geneva Convention is essential to protect the world from the growing threat they pose, according to the President of the world’s biggest technology company.

In an interview with The Telegraph, Brad Smith, president of Microsoft, said the use of ‘lethal autonomous weapon systems’ poses a host of new ethical questions which need to be considered by governments as a matter of urgency.

He said the rapidly advancing technology, in which flying, swimming or walking drones can be equipped with lethal weapons systems – missiles, bombs or guns – which could be programmed to operate entirely or partially autonomously, “ultimately will spread… to many countries”.

The US, China, Israel, South Korea, Russia and the UK are all developing weapon systems with a significant degree of autonomy in the critical functions of selecting and attacking targets.

The technology is a growing focus for many militaries because replacing troops with machines can make the decision to go to war easier.

But it remains unclear who is responsible for deaths or injuries caused by a machine – the developer, manufacturer, commander or the device itself.

Smith said killer robots must “not be allowed to decide on their own to engage in combat and who to kill” and argued that a new international convention needed to be drawn up to govern the use of the technology.

“The safety of civilians is at risk today. We need more urgent action, and we need it in the form of a digital Geneva Convention, rules that will protect civilians and soldiers.”

Speaking at the launch of his new book, Tools and Weapons, at the Microsoft store in London’s Oxford Circus, Smith said there was also a need for stricter international rules over the use of facial recognition technology and other emerging forms of artificial intelligence.

Unstoppable only if Microsoft is allowed to continue.
Unplug them from society.