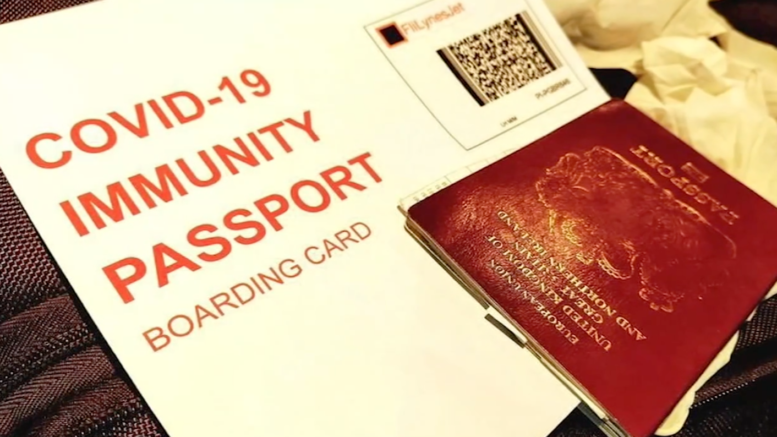 As the Federal government races forward to implement “vaccine passports”, Florida again leads the way to assert its States Rights to say “NO!” Technocrats are using the pandemic as an excuse to implement ubiquitous tracking to build a comprehensive portfolio on every citizen. All states should rise up to protect their citizens.⁃ TN Editor

Today, Florida Gov. Ron DeSantis held a press conference after signing a bill to protect businesses from liability related to COVID-19. DeSantis also said he would be taking executive action to prohibit vaccine passports in the state of Florida. He stated his position clearly:

We are not supporting doing any vaccine passports in the state of Florida. No one was more aggressive about getting this out. If you look at all the different points throughout Florida, whether it’s a hospital, county health department, a retail pharmacy, a drive-through site, church sites, all this stuff, it’s important. But we’ve always said we want to provide it for all but mandate it for none. Now, with something that while it was advised to take, particularly if you’re vulnerable, we were not going to force you to do it. So, there was never under discussion any mandates to take vaccines. We will not have COVID vaccines mandatory in Florida.

So, we’re not supportive of that. I think it’s something that people have certain freedoms and individual liberties to make decisions for themselves. I also wonder it’s like, okay. You’re going to do this and then what? Give all this information to some big corporation? You want the fox to guard the henhouse? I mean, give me a break.

I think this is something that has huge privacy implications. It is not necessary to do. You know, we’re going to have hit three and a half million seniors that have gotten shots sometime this week. Likely 75% of seniors and it’s important to do it. But at the same time, we are not going to have you provide proof of this just to be able to live your life normally. And I am going to be taking some action in an executive function, in an emergency function here shortly.

But I’ve spoken, I just spoke with the Speaker about it and I’m telling [Senate President] Wilton [Simpson] publicly, so I hope he agrees with me. But we do need, we need the legislature to come in and just say this is not happening in Florida. And I think that would provide a lot of certainty for a lot of people. I understand kind of how some folks can embrace the idea and I’m not saying it’s all necessarily done for bad purposes. But I think ultimately it would create problems in the state. It’s not necessary to do and so we’re going to look to do it. We’re going to do some action this week.

This perspective is precisely correct. A primary role of government is to prevent your rights from being infringed. This obligation includes protecting freedom of association and movement. It may be near religion in some right-wing circles to say that private businesses can do whatever they want. This is simply not the case. When a private company seeks to interfere with your inalienable rights, it is incumbent on the government to step in. DeSantis and the Florida legislature have already protected businesses from COVID-19 liability in legislation signed today:

“We don’t want to be in a situation where people are scared of being sued, just for doing normal things,” DeSantis said. “And so, we worked very early on to look at to see ways that we could provide some certainty for both businesses, and healthcare providers. This was obviously a top priority for many of us up here. And I think that the legislature has been able to deliver today.”

On what planet should businesses with this protection be able to deny entrance without proof of vaccination? It is up to individuals to engage in activities they feel are safe using rational decision-making based on their vaccination status, risk, or recovered status.

Thank goodness for one sane governor.