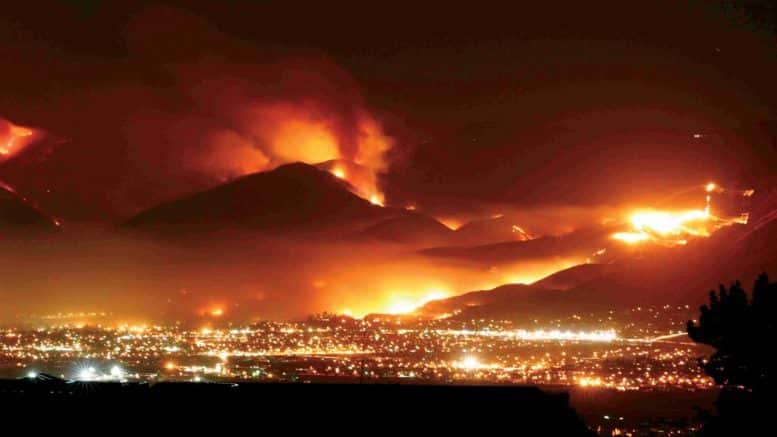 In other words, ‘It’s your own fault that you are being burned out.” This is the height of arrogance, ignorance and insolence the West has seen in a long time. If Brown were judged by his own standards, he would be put in jail for gross negligence in not fireproofing the state’s forests, and fined $5 trillion for dumping untold millions of tons of CO2 into the atmosphere.  ⁃ TN Editor

California’s governor has said that deadly wildfires in the winter will be ‘the new normal’, as fire crews rushed to contain the fires, with dry desert winds expected to intensify over the weekend.

Governor Jerry Brown on Saturday toured Ventura County neighborhoods ravaged by a weeklong wildfire that killed at least one person and destroyed hundreds of homes and other buildings.

At a news conference, the Democrat said drought and climate change mean California faces a ‘new reality’ where lives and property are continually threatened by fire, at a cost of billions of dollars.

He added that gusty winds and low humidity are continuing and warned that there’s a good chance of seeing ‘firefighting at Christmas‘.

He said it will take ‘heroic’ efforts in the US and abroad to stem climate change and urged US lawmakers to pay more attention to dealing with natural disasters such as fires, floods and earthquakes.

Over the past week, six major wildfires have forced more than 200,000 people to flee and choked the air across much of the region.

Forecasters predict wind gusts to become more intense by Saturday night, challenging the 8,700 firefighters who have been battling the fast-moving blazes for five days.

Smoke from the raging wildfires in Ventura County is seen on Saturday. ‘I used to love the wind—the feeling of free-spiritedness it brought as it whipped through my hair and made me a little unsteady on my feet,’ wrote photographer Jenni Keast. ‘Not any more. Now it’s just bringing destruction and mayhem as my beloved state burns’

Hey jerry, ever heard of small, controlled burns & logging renewable resources? If only pine/spruce saplings voted… Illegally of course !! ? You Are a piece of work, Traitorous bastard !

Fine people for over watering their laws. Give them a $500 rebate to tear out the lawn and replace it with fake grass made out of petro chemicals or died bark.
State burns down, blame global warming.