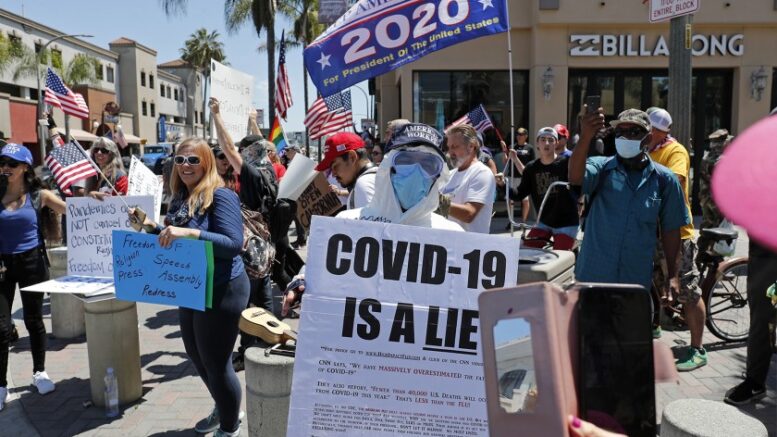 Please Share This Story!
PDF 📄
Anyone questioning the coronavirus pandemic should be aware of the strategies being passed around to discredit, ridicule and even shame such thinking. Hint: facts don’t matter. Fortunately, one can use the same techniques and strategies to turn the table in the other direction. ⁃ TN Editor

Anyone who’s braved a Thanksgiving conversation with an uncle or commented on a Facebook post or really is just alive in the year 2020 knows that convincing a skeptic to change their mind is nearly impossible. A hostage negotiator may say that empathy and not logic is often the best weapon against COVID-deniers, but should you want to engage in a debate about the reality of the virus that’s led to over 150,000 American deaths, it’s best to come armed with cross-examination skills.

Since lawyers aim to convince a jury rather than the witness themselves, this isn’t a perfect parallel, but plenty of the same techniques apply. Two law professors, Lara Bazelon (USF) and Spencer Pahlke (Berkeley Law), humored our questions about how to use their decades of legal acumen to disarm someone distrustful of science, or worse, a troll posting memes showing Bill Gates as a “plandemic” puppet master (who also spreads cancer through 5G cell phone towers, obviously).

Like any lawyer taking on a difficult case, the first thing to do before interacting with a COVID denier is prep work. You can expect a spread offense of many divergent theories not covered in mainstream media, so Google “what sources do coronavirus deniers rely on most commonly.” Politely ask for evidence, and be ready to discredit unreliable outlets or so-called experts by stressing their underlying motivations, which in the case of viral Youtube personalities, is likely financial. With regards to hydroxychloroquine advocate Stella Immanuel, one might calmly inquire if they’re aware of her statements about demon sex.

“I think for some of these folks, they really enjoy making other people angry, and sort of red-faced, and almost incoherent in the enormity of what they’re trying to explain and the stupidity of what they’re confronted with,” says Bazelon. “I wouldn’t give them that.”

Pahlke suggests establishing agreement on a few basic facts that may deflate faulty arguments, like comparisons to flu deaths. For instance, establishing a universal reference point, like the fact that the 3,000 deaths from the September 11 terrorist attacks is something of a big deal. Or even playing to partisan slants, bringing up the cost of lives from controversial issues like inner city gun violence.

“If you’re concerned that they were going to disagree that 150,000 deaths isn’t enough, there are ways to get them into a difficult position where they’re agreeing that something less than that is in itself a tragedy,” says Pahlke.

A personal hypothetical is another strong approach. Present a scenario where one of their specific family members contracts COVID-19 and has to be hospitalized. What happens when as their mother’s medical contact, they’re forced to sign off on treatment decisions? Will they follow the doctor’s advice or insist that it’s not serious and demand another treatment? A concrete situation like that will resonate much more than sweeping data-driven statements or testimonials about others.

Another strategy is to ask a question and give the denier a few options that are all bad (hopefully no judge is present to yell “leading the witness!”). One could present a list of Democrat and Republican politicians who have all spoken out against the virus, then ask the denier if they trust any of them. Or go even further and ask an open-ended question.

“I generally don’t like to ask open-ended questions,” says Bazelon. “But with crazy people I sometimes do, because whichever answer I get is going to be good.” In the case of the coronavirus, Bazelon suspects answers would fall into two categories: total ignorance or defiance of conventionally accepted knowledge (neither a good look).

You can push somebody out on the limb and make them look even more silly, because the position they’re taking has so little support so that nobody else, your jury, would want to follow them out on that limb,” says Pahlke. “You get to persuasion not by virtue of directly persuading your witness, but by isolating them in this world that’s not real. And pointing out how unreal this world they’re living in is, so others wouldn’t tread there.”

“it is important to keep pointing out the falsehoods…” As in the CDC on August 26 revising the true death count from CV 1984 down from the CDC’s previous count of 161,000 to less than 10,000 of pure CV dead. The other 151,000 had one or more comorbidity issues and could have died from any number of causes.

Lawyers on how to straw man, appeal to emotion, and use logical fallacies. Is it any wonder people hate them so much?

To silence the Covid Confirmers you only need one word SWEDEN