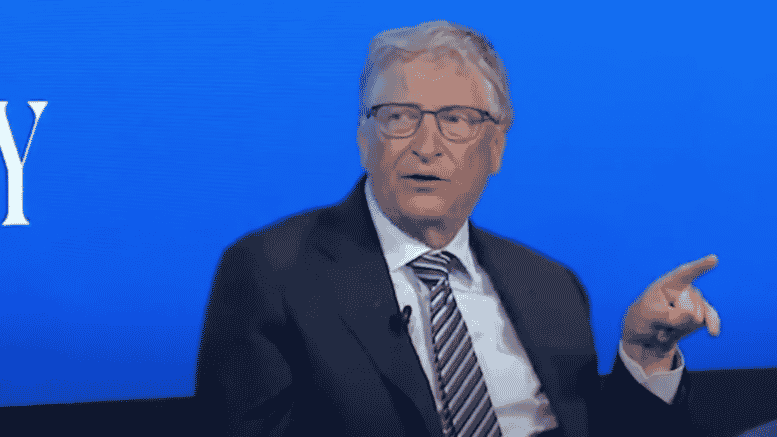 Please Share This Story!
PDF 📄
Bill Gates is famous for speaking out of both sides of his mouth on an issue to lead you to a false conclusion. No, Bill, your “vaccines” have not saved millions of lives. In fact, on a net basis, they have killed a lot more people than they could have possibly saved. We see right through you, Bill Gates. ⁃ TN Editor

A few weeks back, at the World Economic Forum (WEF) meeting in Davos, Bill Gates said some surprising things. In the course of a 56-minute panel discussion the vaccine pusher extraordinaire admitted (starting at the 18:22 mark) that the Covid vaccines do not block infection and that the duration of whatever protection they bring to the table is extremely short.

He later talked (starting at 51:00 mark) of the absurdity of implementing any Covid passport program—and one can logically deduce any other measure to segregate the vaccinated from the unvaccinated—when the injections have shown no ability to do the least that one should expect from a vaccine: prevent infection and transmission.

These admissions violently kick the stool out from under the arguments made in favor of the more assaultive and damaging Covid “containment measures” taken in the past two years, many of which are still being pursued with pitiless vigor by public officials, CEOs, and educational “leaders” all around the world.

Are we to believe that Bill Gates had a sudden impulse to undermine all that he used his billions to mercilessly promote over the last two years? And that he was giving all those currently carrying out those plans permission to stand down?

It’s a nice thought. But I don’t believe it to be the case.

No. Bill was simply engaging in one of the more tried and true techniques of elite information management, the limited hangout, or what I prefer to call a drive to “save the frame” of an argument that is quickly taking on water.

Since Bill and many of the people he has paired up with to force the experimental and often harmful vaccines upon the world, effectively own or have donated untold amounts of money to many of the world’s more important media outlets, he knew beforehand that he did not have to worry much about his words being widely circulated.

And so it was. Only relatively small independent news gatherers took any note of what he said.

So who was he addressing his words to and why?

He was speaking to the fellow true believers and providing them with a rhetorical model for handling the loss of faith some among their ranks are having in the face of the vaccines’ abject failure.

The key to understanding the frame game here is the clause Gates uttered right before the “but” with which he introduced his truthful words about the “vaccines” pitiful infection-blocking capabilities and short duration of effectiveness: “The vaccines have saved millions of lives.”

Those familiar with the work of cognitive linguist George Lakoff, or the activities of pollster and so-called political wordsmith Frank Luntz will know what I’m talking about.

What these two men have in common—despite their divergent political allegiances—is their belief in the extraordinary power of rhetorical framing; that is, the tendency of the human brain to subordinate the careful analysis of empirically proven details to the embrace of an overarching cognitive metaphor that appeals to their deeper, if often unstated, cultural and emotional values.

It’s the difference between, for example: “The US invaded Iraq on false pretenses and destroyed it, killing hundreds of thousands of innocent people.” and “In its efforts to bring democracy to Iraq, the US made a number of tragic mistakes.”

The first states a bald empirical truth. The second obfuscates that crude reality and subordinates it to the noble vision, so cherished by Americans when contemplating their role in the world, of a country that is constantly helping people around the world to better their lives.

And with widespread imposition of mental frames like this through the media, “poof!” go all the gory, on-the-ground details, and with them more importantly, the need to actually interrogate what we did and how we might seek to repair the lives we broke.

Going back to Davos, Bill was effectively saying to his minions, “You are on a great moral crusade. We’ve had some small problems along the way, but don’t give up, because the world needs us to continue to be heroic and save more lives.”

And with that cognitive frame in place, any creeping doubts those in the audience might have about what they have done, and their future mission, disappear just like that.

We see the same gambit used when the US government inevitably links the apparent waning of the pandemic to the use of vaccines. Here, for example, is what the CDC said to CNN shortly after lifting requirement that US citizens be tested before returning home from foreign travels:

“The Covid-19 pandemic has now shifted to a new phase, due to the widespread uptake of highly effective Covid-19 vaccines, the availability of effective therapeutics, and the accrual of high rates of vaccine-and infection-induced immunity at the population level in the United States. Each of these measures has contributed to lower risk of severe disease and death across the United States.”

It’s no accident that the first factor adduced to explain the onset of happier days, the one that sets the frame for all that follows, is the “widespread uptake of highly effective Covid-19 vaccines.”

The goal here— as it was in the case of Gates at Davos—is to preserve, in the face of abundant empirical evidence to the contrary, the frame that presents the forced administration of vaccines as the great slayer of the pandemic and gifter of our vanquished freedoms, and to turn that suggestion into an established fact through constant repetition.

Nice explanation of the Gates of Hell double-speak.

However, the WEF/WHO/UN predators can say anything they want as long as they have the FakeSM running interference for them. And they do. These despicable individuals have ruthlessly gaslighted the willfully ignorant and outright stupid worldwide. In the US the officials who are still blindly pursuing political covid tactics which no longer have a point are going to continue doing the same because they are being paid by an illegitimate government of alphabet agencies who have no problem murdering children–daily. FDA voted YES to murder them.

Limited Hangout: Bill Gates And The Frame Game – Life, Death and all between