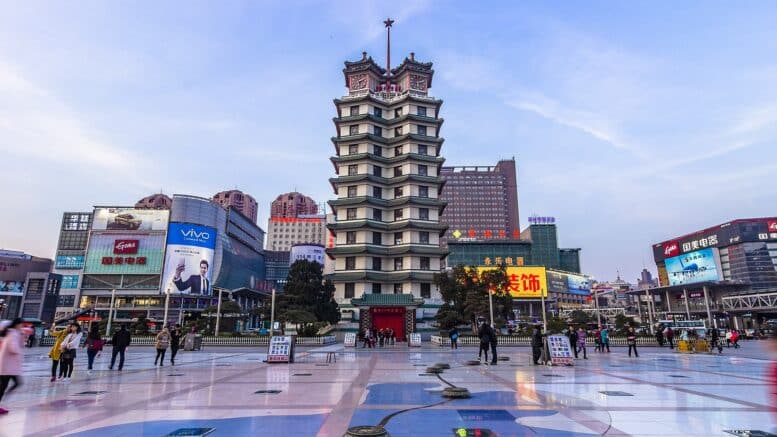 Please Share This Story!
PDF 📄
Whatever tool of repression is close at hand will suffice for Technocrat purposes. In this case the COVID-19 tracking app is being weaponized to suppress protestors who are protesting to get their rightfully-owned bank deposits back. Thus far, depositors have been cut off from 39.8 billion Yuan ($5.91 billion).

According to the article,

“It’s so scary,” one user wrote. “If the health code is abused … it could be putting digital handcuffs on us. Everyone will become a prisoner from now on and could be stopped anywhere, anytime.”⁃ TN Editor

The Chinese regime is using COVID-19 control measures to stop depositors whose savings were frozen by rural banks from protesting.

Several depositors told The Epoch Times on June 14 that the health code on their COVID-19 app turned red as soon as they scanned venue barcodes at Zhengzhou, the provincial capital city of central China’s Henan Province. A red health code—indicating a potential COVID-19 patient—means that the carrier is barred access to all public places from public toilets to shops to train stations and faces mandatory quarantine in centralized isolation centers.

They’re among tens of thousands of bank depositors who have fought to recover their savings for more than two months. The crisis started in April, when at least four lenders in Henan froze cash withdrawals, citing internal system upgrades. But customers said neither these banks nor officials have since offered any information on why or how long the process would take, prompting angry protests outside the office of the banking regulator in Zhengzhou in May.

An estimated 1 million customers were reportedly affected, which has left many residents’ life savings at stake and patients unable to pay for regular medical care.

Depositors have been cut off from at least 39.7 billion yuan ($5.91 billion), according to Sanlian LifeWeek, a state-run magazine.

Aggrieved depositors across the country planned another protest in Zhengzhou on June 13 to demand an answer, although previous gatherings were met with silence from local authorities and violence from plainclothes police officers.

However, their plan was thwarted again as their health codes turned red at the city’s train stations or highway entrances.

A red code indicates the highest level of risk, meaning the person tests positive, has been close to a COVID-19 patient, or has visited high-COVID-risk areas in the past 14 days. Residents with a red code face two weeks of centralized isolation.

The Chinese regime adopted three-tiered color-based QR code systems utilizing big data and mobile technology to track people’s movement as part of its COVID-19 control measures. Residents must present a green health code on mobile phones while scanning a venue code for every place they visit.

Liu Yong (pseudonym), a depositor from nearby Hebei Province, drove to Zhengzhou hoping to get his money back on June 12. But he ended up stranded on a highway as his health code turned red when he scanned the venue code at the exit.

Liu carried a green health code as well as a negative PCR test result when he left his hometown. He was required to return home, as police threatened to send him to a quarantine center if he refused to do so.

With the red code, his return road was blocked. Liu was unable to take a break or even use the toilets at the service station while driving back to Hebei. In an interview with The Epoch Times on June 14, Liu said he was still blocked at a highway exit leading to his hometown.

It was unclear how many people encountered the same issue, but one person involved told The Epoch Times that hundreds of depositors across the country shared their red code screenshots in a group chat on WeChat, the country’s popular instant message app.

An employee handling the Zheng Health Commission inquiries told The Epoch Times that they had heard of the health code problems and reported the issue to relevant departments.

Another bank customer, Li Yin (pseudonym), said she and three other depositors found that their health codes turned red when scanning Zhengzhou venue codes remotely on June 12. They tested the app in their homes in Inner Mongolia, a northern Chinese province that’s 550 miles away from Zhengzhou.

But Li said her friend’s husband, who wasn’t connected to frozen deposits, didn’t find the color change after scanning, adding to speculation that they were on authorities’ target list.

“They [officials] are like robbers,” said a third bank customer who was stopped by police at Zhengzhou train station on June 12 and required to leave. “We’re all legal depositors.  Why couldn’t we even have an explanation?”

The truth of the CCP slavery model–what it really looks like in practice. It’s not great deals on products and refunds. The CCP support Klaus Schwab’s carrot on a stick statement “You will own nothing and you will be happy”. The stick? A promise to handcuff you to a wall and if they need entertainment, torture you, kill you and watch you die. (NOT overstated.) The West wants the CCP computer model BAD, really bad. The stupids don’t have a whisper of a clue as to what will happen to them if the predators get what they want. YOU WILL… Read more »

Coming soon to a country near you.
Oh, it already has-Canada.
Guess that leaves us next.
Do not accept the mark of the beast.

Chinese City Turns COVID-19 App Into Digital Handcuffs For Bank Protestors – Life, Death and all between

The Warning Shot Has Been Fired – Gem State Patriot News

[…] punishment for misbehaving, or non-compliance, is being banned from services and goods needed for basic human […]