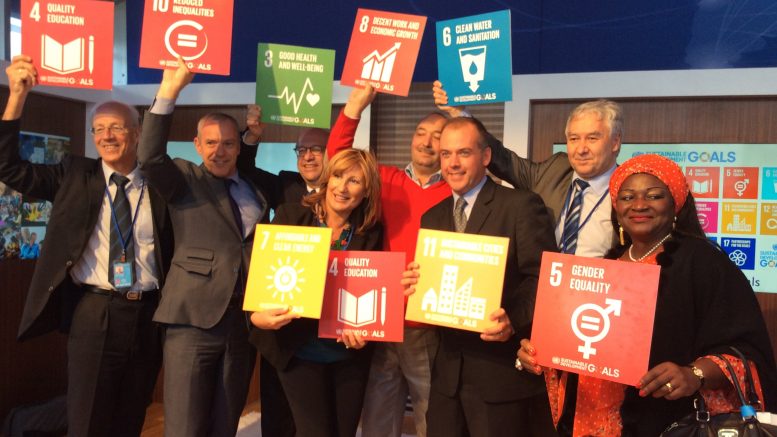 We’re hearing more and more about cities and their roles in sustainability. But amidst that rising discussion, how can we build opportunities to ensure some real success for sustainable development in an urban world?

In October, the Habitat III conference on urbanization resulted in the adoption of a 20-year strategy on sustainable cities. That document, the New Urban Agenda, promotes cities as positive forces for sustainable development. This recognition alone constitutes an important paradigm shift.

First, it fails to adequately harmonize with the global agreements struck in 2015, particularly the Sustainable Development Goals (SDGs), the Paris Agreement on climate, and the Addis Ababa Action Agenda on financing for development. Together, these agreements will guide global sustainability efforts towards 2030 – what’s collectively known as Agenda 2030. This gap in the New Urban Agenda is problematic given that Habitat III was being seen as an opportunity to “localize” the SDGs in cities.

Second, the New Urban Agenda fails to give clear guidelines on implementation of its own aims.

These gaps leave a hole at the centre of a key strategy on global action toward sustainable urban development regarding how to choose priorities and build public policies. In response, we propose a new initiative: Local Agenda 2030, inspired by the decades-old Local Agenda 21.

Local Agenda 21 was an effort to implement at the local level the global environmental strategy that came out of the 1992 “Earth Summit” in Rio. Following the summit, experts and networks across the globe engaged in new campaigns to inform, offer methodological guidance, create peer-to-peer exchanges and more. This collective learning process was particularly key in bringing local authorities into the process, and in building political momentum.

Over the following decade, Local Agenda 21 spurred over 6,000 initiatives to locally adapt and adopt the global programme. The project raised the question of environment at the local level but also promoted a comprehensive approach to dealing with the interdependent issues of sustainable development.

And it was participatory: Steered by local authorities, Local Agenda 21 aimed to involve civil society, local business and government officials, and to build consensus and coalitions on regional priorities. Finally, Local Agenda 21 sought to emphasize a series of key steps aimed at effective implementation — diagnosis, planning, programming, budgeting and monitoring.

The initiative proved critical in raising awareness on issues of sustainable development, within both public authorities and local communities. Locally, all stakeholders were able to seize the opportunity of this global agenda to push for new concerns — in this case, around the environment. It also instilled the idea to “think globally, act locally”, while jumpstarting the view that local authorities should be in charge of implementing the global agenda.

Unfortunately, Local Agenda 21 was often weak in implementation. Though consultative phases were typically robust, once an action plan was decided upon, implementation did not necessarily follow. Inevitably that has resulted in both frustration and a limited ability to scale up.

In this regard, we can point to three problems that beset Local Agenda 21. First, the initiative had a sole focus on the environment, an overriding priority that did not favour inter-sectoral action. Second, a lack of national support constrained the project’s means of implementation, particularly in terms of financial resources. And third, the involvement of third-party actors such as local civil society and businesses often was limited to consultation rather than actual participation in the decision-making process.

Based on these experiences, a new initiative — Local Agenda 2030 — could now help to facilitate the “localization” of the SDGs and Paris Agreement, and implementation of the New Urban Agenda. The key here will need to be moving beyond the aspirational aspects of these frameworks and to focus instead on specific implementation mechanisms and road maps for action. In this way, Local Agenda 2030 would have the potential to articulate both a political vision of sustainable development and a means for action.

Agenda 2030 enjoys a few assets that its predecessor framework didn’t have. The new 15-year vision goes beyond environmental concerns, after all, to integrate social, economic and institutional issues inherent to sustainable development. Therefore, the environmental bias that characterized Local Agenda 21 wouldn’t be an issue.

Local Agenda 2030 would be able to use the 2015 agreements, particularly the SDGs, as political backbone to define local priorities. In so doing, it could reconcile the challenge of contributing to the SDGs through localization with the ambition of putting cities at the core of sustainable development

How could policy priorities be designed through Local Agenda 2030? This question relates to the means of implementation. The last of the SDGs’ 17 goals takes on this issue directly and offers ideas on key drivers for change. Translated at the local level, that would mean promoting local financing, technologies and innovation for urban development and municipal capacity-building. It also would mean addressing systemic issues of local policy coherence through strategic planning, multi-stakeholder partnerships and local monitoring.

Capitalizing on the lessons learned under Local Agenda 21, we can identify three main advantages of a new such initiative.

First, Agenda 2030 offers an attractive international perspective around sustainable development that ensures buy-in from political leaders, civil servants, businesses and civil society. This framework needs no further negotiation: It already has been adopted by all members of the United Nations,its implementation began last year, and it will now guide global and many national efforts over the next decade and a half.

In this way, Local Agenda 2030 could set the stage for all local stakeholders to gather and work on action plans for which objectives already exist. Such an initiative would be fairly resistant to political turnover and ready to facilitate local awareness-raising and commitment — both of which particular limitations of Local Agenda 21.

Second, cities constitute ideal laboratories to test the feasibility of integrated action. To move national policies out of “silos” takes time and effort. At the local level, however, planning and governance offer more opportunities to engage in integrated territorial action. Local authorities are de facto policy conductors, who can facilitate collaboration. Therefore, cities could serve as micro-incubators, experimenting on new tools and partnerships, which in turn could be replicated and scaled up. International and national policies could make a difference by promoting this type of “lab” approach.

Third is the issue of follow-up and review — how we will be able to track progress on these goals. This is particularly important given that the indicators by which this progress is supposed to be gauged exist mainly at the national level. In order to serve as a tool for monitoring local policies, much of the SDGs will require localized data. Yet currently many cities lack such data, especially where urbanization is informal.

Still, we know of several important ways by which to facilitate the management of local knowledge. Technology can assist in this process — for instance, through geographical information systems or addressing software. So too can social innovation — for example, through participatory enumeration and mapping.

But this information still needs to be officially acknowledged. That will require a shift in the philosophy on follow-up and review — away from a focus on top-down expert evaluation to a bottom-up aggregation of locally produced data. And in this, Local Agenda 2030 can play a key role.

To fulfil these promises, Local Agenda 2030 would have to mobilize dedicated institutional, financial and human resources. And while local authorities will be key in this initiative, the international community will also need to take a few initial steps in support.

One key strategy will be to build a community of interests, lobbying and knowledge on sustainable urban development. This means producing methodological toolkits, peer learning and coordination mechanisms, adapted indicators and criteria by international platforms and/or institutions. Education will be needed for both local authorities and the general public. In this, some strong examples already exist, such as the “Toolbox for Localizing the SDGs”, unveiled at Habitat III by UN-Habitat and the Global Taskforce of Local and Regional Governments.

Political leaders, too, must endorse local agendas and become champions for local implementation of the SDGs. Overarching visions will need to be institutionalized in municipal administrations, along with procedures to ensure that they are appropriated and mainstreamed — processes that will clearly require buy-in from public officials. In this, the role of media and academia in building powerful narratives and structuring political discourses can be critical.

It also will be important that national states give a mandate — and resources — to subnational authorities. This can be independent from politicized decentralization processes but still contribute to local authorities’ capacity-building and to multilevel governance. Calls for projects, initiated either by national governments or international networks, could spur new local initiatives.

Awards for experimentation could important mobilize financial and technical support for local authorities, and help strengthen their ability to implement sustainable development policies. The identification of best practices in the field also would bring visibility to Local Agenda 2030 — a helpful trigger that could come, for instance, from philanthropic foundations.

At Habitat III, mayors placed themselves at the forefront of sustainable urban development — and warned that they will need enabling environments to fulfil this role. Cities increasingly appear to be legitimate and committed stakeholders in solving global problems.

Nevertheless, Habitat III did not solve the issue of the role and place of mayors in the international sphere. It is increasingly clear that national-level authorities will have to partner with local authorities. Local Agenda 2030 could serve as both leverage and support for this evolution.

Explicitly referring to international agreements also is strategic for local authorities. Many national governments are reluctant to decentralize in principle, but they may be convinced once cities prove that they can contribute to national strategies — around climate or sustainable development more generally.

Whether in terms of national governments endorsing cities’ experimentations, local authorities proving their ability, or the international community providing guidelines, promoting Local Agenda 2030 would be a win-win-win situation. The international community would gain in knowledge from ground-level practices, states would gain local contributions to their national strategies, and local authorities would gain in political recognition.

Participation and proximity with local stakeholders also would be likely to attract popular traction, a particularly notable component of the success of Local Agenda 21. Today, the urban, climate and sustainable development communities could focus on promoting the emergence of a Local Agenda 2030 and dedicated multi-level collaboration, thus paving the way toward success in 2030 with the support of all.

“In this way, Local Agenda 2030 could set the stage for all local stakeholders to gather and work on action plans for which objectives already exist. Such an initiative would be fairly resistant to political turnover and ready to facilitate local awareness-raising and commitment.”

But there are no Globalist conspiracies.