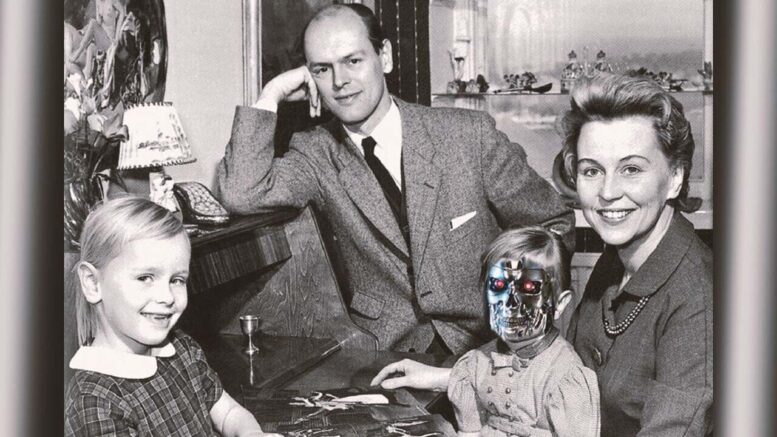 You know you’re in for a treat when a pre-print AI research paper begins by explaining that nobody really knows what AI is and ends by solving artificial general intelligence (AGI).

The paper’s called “Co-evolutionary hybrid intelligence,” and it’s a work of art that belongs in a museum. But, since it’s state-sponsored research from Russia that was uploaded to a pre-print server, we’ll just talk about it here.

The research is only four pages long, but the team manages to pack a lot in that space. They don’t beat around the bush. You want to know how to solve AGI? Boom! Page one:

The purpose of this article is to show a possible way to create strong intelligent systems based on the hybridization of artificial and human capabilities and their co-directional evolution.

The “hybridization of artificial and human capabilities and their co-directional evolution” sounds a lot like people and computers getting the urge to merge and making a go of things together. That’s kind of romantic.

But what’s it really mean? When AI researchers talk about “strong” AI they don’t mean a robot that can carry heavy objects. They’re talking about the opposite of a “narrow AI.”

All modern AI is narrow. We train AI to do a specific (hence narrow) function and then find ways to apply it to a task.

A “strong” AI would be capable of doing anything a person can do. If such an AI ran up against a task it wasn’t trained for, it could write new algorithms or apply knowledge from a similar but unrelated task to solve the problem at hand.

What the researchers propose is a method by which we would stop relying on massive quantities of data to brute-force progress in AI. They say we should combine our natural intelligence with the machines’ artificial intelligence and become permanently linked in a co-evolutionary paradigm.

The development of data-centered intelligence is approaching its limits. Instead of a datacentered approach it is required to use intelligence-centered approach. Hybridization of human and machine intellectual capabilities based on cognitive interoperability and coevolution is a new frontier.

As to why this “new frontier” is the only path forward, the researchers offer the following explanation:

The human cannot create something exceeding his cognitive abilities. Thereby, the analog of the Turing test for the strong intelligence can be created. Consequently, solving a problem that human intelligence is unable to solve, may be a good benchmark. To accept the fact the problem is solved the human intelligence must be developing synchronously with artificial one.

In other words, a hypothetical model of the strong artificial intelligence can only be hybrid.

The team is telling us that humans can’t build an AI that’s smarter than a human because we’re only human. And, even if we did, we wouldn’t be smart enough understand it.

That sounds pretty deep, if we’re speaking philosophically, but we use math to describe the unknown in physics all the time. It’s difficult to place any scientific value on the assertion we couldn’t define a superintelligent AI if we built one.

Let’s just roll with it though. According to the researchers, the path towards hybrid strong intelligence involves augmenting data-centric training methods with direct human-involvement at every level of learning.

That sounds a lot like the way we “train” humans. We send them to school, they get educated, they become experts, they teach, and the cycle begins anew.

We’re all for such a paradigm. If every AI company had to do hands-on training instead of just smashing everything inside of a black box and monetizing whatever comes out the other end, we wouldn’t be living in a world where AI scams regularly become billion-dollar industries.

“Co-Evolutionary Hybrid Intelligence?” That is the point! Evolution. Man thinks he can evolve into a god WITHOUT God. We will all die sometime and no matter what crazy scheme they come up with that cannot change the very fact of DEATH and where the soul of man goes. Evolution is a great big lie! God created the heavens and the earth and everything in it in 6 literal days! It is not very intelligent to believe in fairy tales! Matthew 10:28 “And fear not them which kill the body, but are not able to kill the soul: but rather fear… Read more »

Amen! And the devil and his kids can’t escape the lake of fire or the judgment of God. Neither will any of them live happily-ever-after in a fallen state.

There is NO SUCH THING as ‘AI’. If a MACHINE (computer) needs to be PROGRAMMED by a HUMAN to FUNCTION……it is NOT ‘intelligence’……it IS a PROGRAMMED COMPUTER/MACHINE. INTELLIGENCE can ONLY occur in THE NATURAL WORLD.

So-called ‘AI’ does NOT exist……and NEVER WILL exist!

So, LETS BE ADULTS…….and CALL THINGS WHAT THEY ARE…….it’s a PROGRAMMED COMPUTER (and NOT ‘AI’)! We need to STOP using the Psychopaths FAKE/FALSE/DELUSIONAL words/terms/language and use the WORDS/TERMS/LANGUAGE that REFLECTS REALITY……like the ADULTS we are supposed to be!

(as in….STOP calling the Death Jabs, ‘vaccines’. They are NOT ‘VACCINES’. They ARE…..EXPERIMENTAL mRNA BIO-WEAPON INJECTIONS!)

I suspect the cyborgs whether half man or fully machine will be bodies that are controlled and inhabited by devil’s and demons.

BINGO! With that said. Here is what it looks like in humans: https://www.youtube.com/watch?v=x6KJUUYsoec .

You are not far off the mark with this statement.