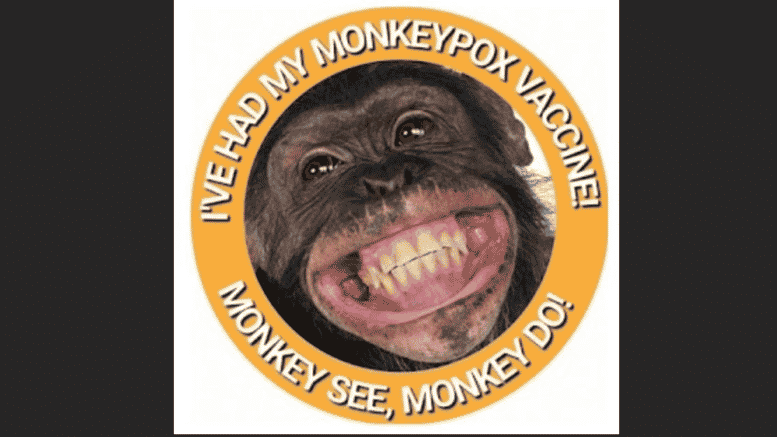 Please Share This Story!
PDF 📄
When a football team discovers a good play, it will use it over and over until it is no longer effective. So it is with Big Pharma and the biomedical cartel. It is up to people, real medical doctors and professionals to tell them to shove it. Already, there are so many holes in the monkeypox argument that it is almost laughable. ⁃ TN Editor

There are now 2500 moneypox cases diagnosed in the current outbreak, in over 40 countries, and not a single death that anyone can point to, outside of Africa. Maybe ever. One moneypox death is said to have occurred this year in Nigeria, a country of 206 million people, but without any confirmatory details.  I think the authorities have been desperate to locate a death.

Only CDC can confirm a case, which means CDC has the ability to decide how many US cases there are.

Canada offered vaccine to high risk men who have sex with men last week, and the UK is doing so now, as reported by the AP on June 21. On June 22, the criteria for vaccinating have already expanded, per today’s Stat:

Yesterday, British authorities recommended taking their monkeypox-fighting tactics one step further: Instead of offering vaccines only to close contacts of those diagnosed with the virus, they suggested broadening the eligibility to anyone at increased risk of exposure. The criteria would be similar to those for pre-exposure prophylaxis against HIV, and might include, for instance, men who have sex with men and who have several partners.

This virus has never spread like this before.  I don’t think a rave or two can explain how it suddenly appeared in 20 countries on 4 continents at once.  The simultaneous nature of widespread cases, and apparent increased human-to-human transmission suggest it was spread deliberately and may have been engineered.

The initial full genome sequence, performed in Portugal, revealed the current strain most closely matched a strain that had been identified in 2018 and 2019 in Israel, the UK and Singapore.  This is suggestive of lab origin, but not definitive proof.  Hopefully there are some honest virologists who will continue to study the genome, and more will become clear with time.  Hopefully Tony Fauci and Jeremy Farrar have not organized yet another coverup of the origins of the moneypox strain.

Why MONEYPOX??  Could it be because there is a vaccine?

It is hard to believe that FDA gave this vaccine a license when you read the FDA reviewers’ comments in their own report, below.  They could not test the vaccine for efficacy against smallpox because there is no smallpox, nor against monkeypox because the disease is so rare.  So the FDA relied on neutralizing antibody titers.  But at the same time, FDA admitted there is no established correlate of protection.  This means that there is no evidence that the titers represent actual immunity to infection.  So FDA relied on animal studies to simply guess the vaccine might be effective in humans.

Furthermore, there is very strong suggestive evidence of cardiac damage/myocarditis, which is a well known side effect of other smallpox vaccines. CDC admitted as recently as last November that 5.7 people per thousand recipients (1 person for each 175 recipients) got myocarditis from the ACAM2000 vaccine, the other US-licensed smallpox vaccine.  But FDA acted blind, deaf and dumb about this obvious, serious risk:

Since only one effectiveness study with an active comparator (POX-MVA-006) exists, and vaccinia specific neutralizing antibody titers determined by PRNT vary greatly across studies, we concurred with the applicant that an integrated summary of efficacy (ISE) is not required. p. 23

… Reviewer’s comment: Contrary to the title, the study did not examine efficacy of the vaccine with a clinical endpoint but instead evaluated immunogenicity and take attenuation and no correlation of protection exists. p. 30

Up to 18.4% of subjects in 2 studies developed post-vaccination elevation of troponin [a cardiac muscle enzyme signifying cardiac damage–Nass]. However, all of these troponin elevations were asymptomatic and without a clinically associated event or other sign of myopericarditis. p. 198

The applicant has committed to conduct an observational, post-marketing study as part of their routine PVP. The sponsor will collect data on cardiac events that  occur and are assessed as a routine part of medical care. p. 200

This suggests that all those men who receive the vaccine now will be the guinea pigs, the first humans to determine if there is protection, and what the risks may be. Gay and bisexual men in their 20s and 30s will probably be at the highest risk of myocarditis, since males in this age group are at the highest risk of myocarditis from COVID mRNA vaccines.

It is they in whom it will be determined whether elevated cardiac enzymes, seen in two trials in up to 1 in 5 Jynneos vaccine recipients, are associated with cases of myocarditis, pericarditis, hart failure, arrhythmias or heart attacks. Then again, assuming FDA and CDC follow the COVID playbook, this serious side effect is likely to get missed, and sudden deaths in recipients may simply be brushed under the rug.

OTOH, if 1 in 5 recipients gets cardiac inflammation, it may be impossible to airbrush it away.

Let me ask again:  WHY moneypox?  Here are some reasonable possibilities:

ACAM2000 caused 1 in 220 never previously vaccinated recipients to get myocarditis or pericarditis, and over 3% (1 in 30) to have elevated troponin, in a well done military study in over 1000 vaccinated soldiers.  But Jynneos could conceivably cause a lot more myocarditis, if the 2 studies that showed troponin elevations in 11-18% of recipients hold up.

b) the current moneypox outbreak causes a febrile, flu-like illness followed by rash, then resolves.  It is mild.  Mortality figures have been way overblown, since no one has died in a western country. The disease seems roughly equivalent to shingles.

c) either vaccine may cause very serious heart damage, much more commonly than COVID vaccines do, based on available evidence, so the risk from the vaccines far exceeds any potential benefit they might convey.

d) the odds so far are that moneypox came from a lab and was deliberately spread.

e) Both moneypox and shingles spread via the release of viral particles from the fluid in blisters, aka pocks. Casual spread is rare.

f) FDA and CDC are probably excited that they will finally get some real data in humans to justify their approval of the smallpox vaccine boondoggles.

Remember what the WHO so presciently sang:  “Don’t Get Fooled Again!”   Please stay safe.

“This virus has never spread like this before. I don’t think a rave or two can explain how it suddenly appeared in 20 countries on 4 continents at once. The simultaneous nature of widespread cases, and apparent increased human-to-human transmission suggest it was spread deliberately and may have been engineered.” Yes, and there is only one lab in the world where the monkeypox virus is held. BUT! It’s all just a coninkidink that it’s shown up in 20 countries all at once. It’ only a coninkidink that every bug and poison on earth has been reviewed for gain-of-function potential by murderous alphabet… Read more »