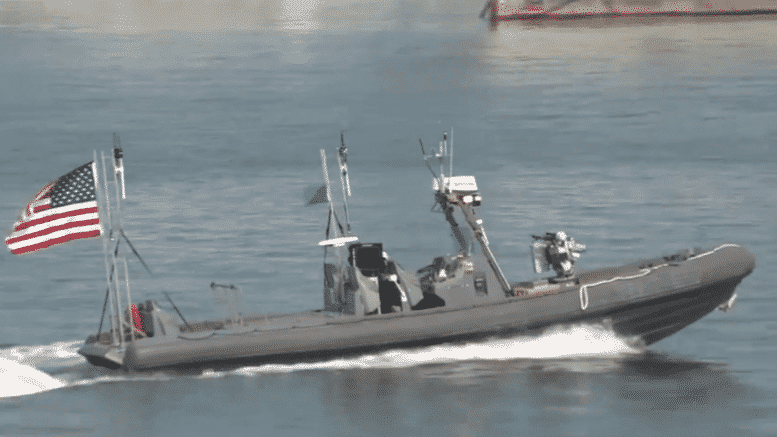 Technocrats, military and warfare combine to create new methods of autonomous combat; WWIII will literally be a battle of the ‘bots’, but collateral damage to civilian populations could be unprecedented. ⁃ TN Editor

Autonomous vehicles have infiltrated much of the military, from airborne surveillance to all manner of ground-based operations. But the Navy remains a mostly human-controlled operation—with the demand for robotic tech focused on conflicts in Iraq and Afghanistan, it simply hasn’t trickled down to aquatic operations yet.

But the Office of Naval Research thinks autonomous boats can have a major impact on the military’s ocean-going efficiency and effectiveness. And it’s starting with swarms of autonomous boats.

In a demonstration conducted this fall in the lower Chesapeake Bay, a fleet of small, human-free boats collectively patrolled a harbor, detected intruders, and even chased them away from the area they were protecting. The Navy first demonstrated the swarm in 2014, when the vessels were tasked with protecting a single ship.

The new exercise highlighted the progress the vessels have made: expanding their coverage area, collaborating on strategy, improving tactical maneuvering, and getting better at spotting hostile parties.

The core system guiding the boats, developed by the Navy and its industrial, academic, and governmental partners over more than a decade, is called Control Architecture for Robotic Agent Command and Sensing, or CARACaS (if nothing else, the American military is a beast when it comes to acronyms). The system uses suites of camera, radar, and other sensing technologies—many of them off-the-shelf, and special software for interpreting the data.

But the boats really set sail when it comes to relaying information to their human overlords—and to each other. During this latest demonstration, when an unknown vessel approached, they collaboratively determined which of them would approach the ship, determine whether it was harmless or suspicious, and pass the info along.

While the Navy didn’t elaborate on the specifics of how its autonomous vessels would identify and engage an intruder, multiple strategies could be in play: cross-checking the vessels visually against databases of boat types to help flag them as hostile or friendly, syncing up maneuvers to block a boat’s path toward the protected ship and nudge it out of the area (that’s the “swarming” functionality), communicating with human security forces, and presumably even physically engaging the targeted ship if it doesn’t alter its course.

This could include ramming, but also weaponized interference. “Future versions of these systems will be armed with non-lethal weapons that could shut down the engines of the targeted boat, and even lethal weapons that could be remotely operated by humans from afar,” says military analyst Peter Singer. “Israel, for instance, has a version that’s armed with a machine gun.”