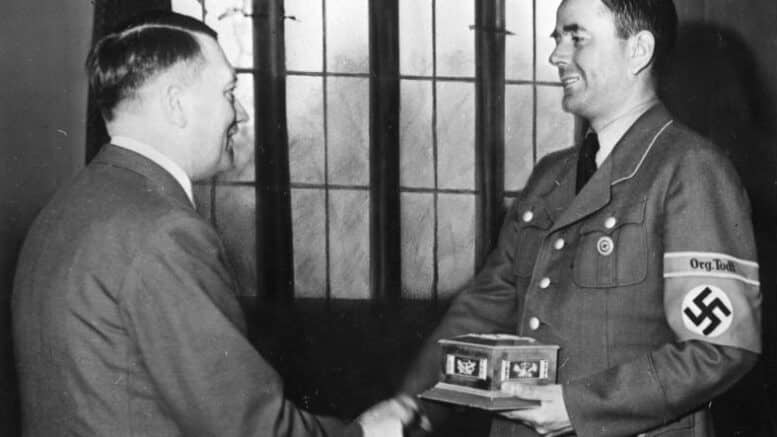 Please Share This Story!
PDF 📄
Hitler relied on Technocrats to prosecute his war machine that conquered nations and executed his “final solution” to get rid of genetically impure segments of society. His ultimate goal was to create a master race of super humans to live in an environmentally reset ecology. Albert Speer was sentenced to 20 years at Nuremberg for his role in Nazi Germany. ⁃ TN Editor

THE PRESIDENT: I call upon the Defendant Albert Speer.

ALBERT SPEER (Defendant): Mr. President, may it please the Tribunal: Hitler and the collapse of his system have brought a time of tremendous suffering upon the German people. The useless continuation of this war and the unnecessary destruction make the work of reconstruction more difficult. Privation and misery have come to the German people. After this Trial, the German people will despise and condemn Hitler as the proven author of its misfortune. But the world will learn from these happenings not only to hate dictatorship as a form of government, but to fear it.

Hitler’s dictatorship differed in one fundamental point from all its predecessors in history. His was the first dictatorship in the present period of modern technical development, a dictatorship which made complete use of all technical means in a perfect manner for the domination of its own nation.

Through technical devices such as radio and loudspeaker 80 million people were deprived of independent thought. It was thereby possible to subject them to the will of one man. The telephone, teletype and radio made it possible, for instance, for orders from the highest sources to be transmitted directly to the lowest-ranking units, where, because of the high authority, they were carried out without criticism. Another result was that numerous offices and headquarters were directly attached to the supreme leadership, from which they received their sinister orders directly. Also, one of the results was a far reaching supervision of the citizen of the state and the maintenance of a high degree of secrecy for criminal events.

Perhaps to the outsider this machinery of the state may appear like the lines of a telephone exchange – apparently without system. But like the latter, it could be served and dominated by one single will.

Earlier dictators during their work of leadership needed highly qualified assistants, even at the lowest level, men who could think and act independently. The totalitarian system in the period of modern technical development can dispense with them; the means of communication alone make it possible to mechanize the subordinate leadership. As a result of this there arises a new type: the uncritical recipient of orders.
We had only reached the beginning of the development. The nightmare of many a man that one day nations could be dominated by technical means, was all but realized in Hitler’s totalitarian system.

Today the danger of being terrorized by technocracy threatens every country in the world. In modern dictatorship this appears to me inevitable. Therefore, the more technical the world becomes, the more necessary is the promotion of individual freedom and the individual’s awareness of himself as a counterbalance.
Hitler not only took advantage of technical developments to dominate his own people, he almost succeeded, by means of his technical lead, in subjugating the whole of Europe. It was merely due to a few fundamental shortcomings of organization such as are typical in a dictatorship because of the absence of criticism, that he did not have twice as many tanks, aircraft and submarines before 1942.

But, if a modern industrial state utilizes its intelligence, its science, its technical developments, and its production for a number of years in order to gain a lead in the sphere of armament, then even with a sparing use of its manpower it can, because of its technical superiority, completely overtake and conquer the world, if other nations should employ their technical abilities during that same period on behalf of the cultural progress of humanity.

The more technical the world becomes, the greater this danger will be, and the more serious will be an established lead in technical means of warfare.

This war ended with remote-controlled rockets, aircraft traveling at the speed of sound, new types of submarines, torpedoes which find their own target, with atom bombs and with the prospect of a horrible kind of chemical warfare.

Of necessity the next war will be overshadowed by these new destructive inventions of the human mind.

In 5 or 10 years the technique of warfare will make it possible to fire rockets from continent to continent with uncanny precision. By atomic power it can destroy one million people in the center of New York in a matter of seconds with a rocket operated, perhaps by only 10 men, invisible, without previous warning, faster than sound, by day and by night. Science is able to spread pestilence among human beings and animals and to destroy crops by insect warfare. Chemistry has developed terrible weapons with which it can inflict unspeakable suffering upon helpless human beings.

Will there ever again be a nation which will use the technical discoveries of this war for the preparation of a new war, while the rest of the world is employing the technical progress of this war for the benefit of humanity, thus attempting to create a slight compensation for its horrors? As a former minister of a highly developed armament system, it is my last duty to say the following:

A new large scale war will end with the destruction of human culture and civilization. Nothing can prevent unconfined engineering and science from completing the work of destroying human beings, which it has begun in so dreadful a way in this war.
Therefore this Trial must contribute towards preventing such degenerate wars in the future and towards establishing rules whereby human beings can live together.

Of what importance is my own fate, after everything that has happened, in comparison with this high goal?

During the past centuries the German people have contributed much towards the creation of human civilization. Often they have made these contributions in times when they were just as powerless and helpless as they are today. Worthwhile human beings wilI not let themselves be driven to despair. They will create new and lasting values, and under the tremendous pressure brought to bear upon everyone today these new works will be of particular greatness.

But if the German people create new cultural vaiues in the unavoidable times of their poverty and weakness and at the same time in the period of their reconstruction, then they well have in that way made the most valuable contribution to world events which they could make in their position.

It is not the battles of war alone which shape the history of humanity but also, in a higher sense, the cultural achievements which one day will become the common property of all humanity. A nation which believes in its future wiIl never perish. May God protect Germany and the culture of the West.