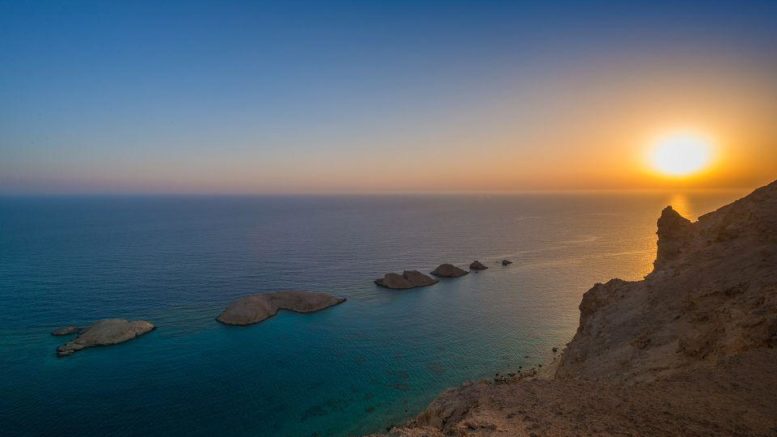 Please Share This Story!
PDF 📄
A modern-day Babel is attempting to rise off the desert floor in the Mideast, intentionally built from the ground up with latest Smart City technology that will be run by robots and AI. ⁃ TN Editor

The walls are covered with graffiti in the sleepy fishing village of Khurayba. There are supplications to God, advertisements for vacation rentals and house painters. Near the local school, there’s a scribbled plea: “Open the windows of hope and drive out the despair.”

It’s here in northwest Saudi Arabia that Crown Prince Mohammed bin Salman wants investors to put their money to realize his US$500 billion vision for the region. Called “Neom,” it promises to be the most freewheeling part of the kingdom, with state-of-the-art resorts and smart technologies run by robots.

But it’s also here where the risks to the 33-year-old prince’s grand plan for his country are writ large. Neom is the boldest pillar of a social and economic transformation that so far has seen at least as many delays as successes. Indeed, the question since the prince announced the vast development at an extravaganza in 2017 has been whether it can become a reality.

A three-day trip to the region, which is roughly the size of Massachusetts, showed the scale of the task as well as the potential. Many of the locals who have lived there for years are looking forward to some prosperity, while others are concerned they will be removed and their homes bulldozed.

The area has stunning, untouched shorelines with waves rippling in the turquoise water. Purple volcanic mountains loom over the Red Sea. Historic sites include a wadi where locals believe Moses landed when he crossed over from Egypt, alighting in a valley along the water.

Construction workers have already descended on the small towns and some building has started. The small Neom Bay airport, with its gleaming white interior, opened for commercial flights last month. Workers were driving construction equipment along the roads. An “I (heart) Neom” sign sits outside a heavily secured base camp of temporary housing for employees, the road leading to sleek white homes lined with solar-powered streetlights.

“It’s not only a vision on paper,” said Lojain Alharbi, a 25-year-old Neom employee who works as a business analyst for the sports sector. “It’s already happening.”

In an interview with Bloomberg in October 2017, Prince Mohammed said that by 2030, the completion date for his transition to Saudi Arabia 2.0, Neom will contribute US$100 billion to economic output.

The name comes from “neo,” meaning new, and “m,” the first letter of mustaqbal, Arabic for future, he said. There will be 12 small cities or towns next to the sea in Neom and others in the valleys and mountains, he said in another interview a year later, as well as an industrial zone, a huge port and several airports.

What Neom Says Is Happening

-There’s interest from foreign companies and more talks are expected.
-Neom plans to start a fund to invest in businesses that will either be based there or sell goods and services there.
-More than 400 firms are “interested in discussing opportunities” with the fund.
-Seven foreign companies are vying to lead development of Neom Industrial City, the project’s second phase.
-Plans to build a causeway linking Saudi Arabia to Egypt are going ahead.
Yet looming large is not just the cost or the challenge of luring foreign investors into what some see as a vanity project, it’s also the politics.

The project is closely tied to Prince Mohammed and until he assumes the throne when his father, King Salman, dies, there will be uncertainty about the transition and what might happen to his plans.