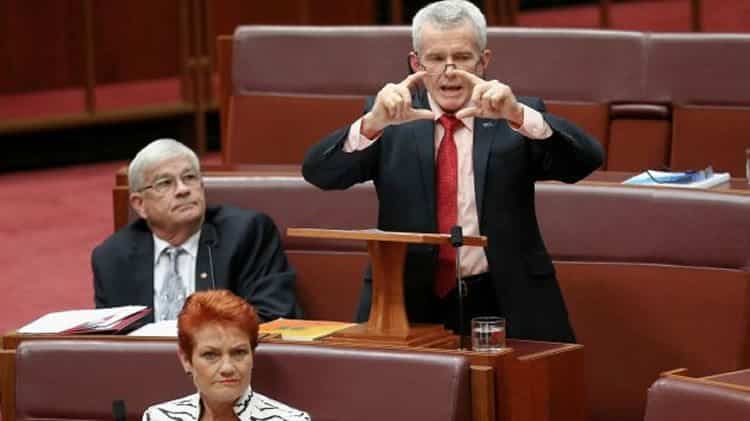 In his first speech to the Australian Parliament, Queensland Senator Roberts came out swinging at the United Nations and its intended domination over Australia, calling for an ‘Aus-Exit’. Roberts was likely inspired by outspoken UKIP leader Nigel Farage, who successfully rallied the Brexit vote in Great Britain. Who will stand up in America and take such a courageous stand? ⁃ TN Editor

One Nation senator Malcolm Roberts has urged Australia to mimic Britain’s Brexit and leave the “socialistic, monolithic” United Nations during his first speech to Parliament, in which he also compared himself to Socrates and said there was no link between carbon dioxide and climate change.

Praising Britain’s recent decision to leave the European Union, which had the power to set laws and regulations affecting domestic laws in member countries, Senator Roberts called on Australians to launch an “Aus-exit” from institutions including the UN and International Monetary Fund.

“Australia’s values and way of life are also at risk from insidious institutions such as the unelected swill that is the United Nations,” he said.

“The EU is a template for total socialist domination of Europe through unelected bodies, such as the IMF, forcing their frightening agenda on the people. It is also the UN’s template, and Australia must leave the UN.”

“We need an Aus-exit,” he declared.

Senator Roberts profusely praised his mentor Pauline Hanson as “Our Pauline”. Video footage shows the One Nation leader repeatedly shaking her head and rolling her eyes.

“I wasn’t rolling my eyes out of disrespect to Malcolms (sic) kind words, I was simply embarrassed,” she posted on Facebook. “After 20 years of having most people in the public eye slander and take pot shots, I guess I don’t take compliments too well.”

Comparing himself to the Greek philosopher and father of Western philosophy, Socrates, Senator Roberts said he liked to ask questions and had posed many querying the science behind climate change.

“Like Socrates, I love asking questions to get to the truth,” he said.

The EU is a template for total socialist domination of Europe through unelected bodies, such as the IMF, forcing their frightening agenda on the people. It is also the UN’s template, and Australia must leave the UN. We need an Aus-exit. – Senator Malcolm Roberts

“It is basic. The sun warms the earth’s surface. The surface, by contact, warms the moving, circulating atmosphere. That means the atmosphere cools the surface. How then can the atmosphere warm it? It cannot. That is why their computer models are wrong.

“The UN’s claim is absurd. Instead of science, activists invoke morality, imply natural weather events are unusual, appeal to authority and use name-calling, ridicule and emotion. They avoid discussing facts and rely on pictures of cute smiling dolphins. These are not evidence of human effect on climate,” he said.

His claims are at odds with the world’s leading scientific and research bodies, including NASA, the CSIRO and the UN’s Intergovernmental Panel on Climate Change.

NASA’s recent Our Changing Climate report says: “The global warming of the past 50 years is primarily due to human activities, predominantly the burning of fossil fuels.”

“The conclusion that human influences are the primary driver of recent climate change is based on multiple lines of independent evidence,” the report adds.

Australia’s Department of Environment and Energy says the climate is changing, “largely due to the observed increases in human activities such as the burning of fossil fuels (coal, oil, and natural gas), agriculture and land clearing.”

“Changes over the 20th century include increases in global average air and ocean temperature, widespread melting of snow and ice and rising global sea levels,” the agency’s website says.

Senator Roberts, elected by voters in Queensland, also called for “privately owned central banks” to be replaced by a government-owned “people’s bank” that would “shield” Australians from the “manipulation” of the international banking sector.

Perhaps predicting his first speech to parliament would be mocked by his political opponents, Senator Roberts declared: “We are not worried what the establishment says about us. We are not here for the establishment. We are here for everyday people and our nation.”

I agree we should exit all ties with the useless traveling cocktail party being the United Nations and stand on our own feet like we have done for many years prior. I remember when Australia worked, when the schooling system worked, when children were taught good from bad and chastised and punished, when the hospital system worked, when the police force worked and when serious crime was few and far between, when you could leave your house open and leave your keys in your car so you knew where they were. This was before the Doo gooding politicians started importing… Read more »