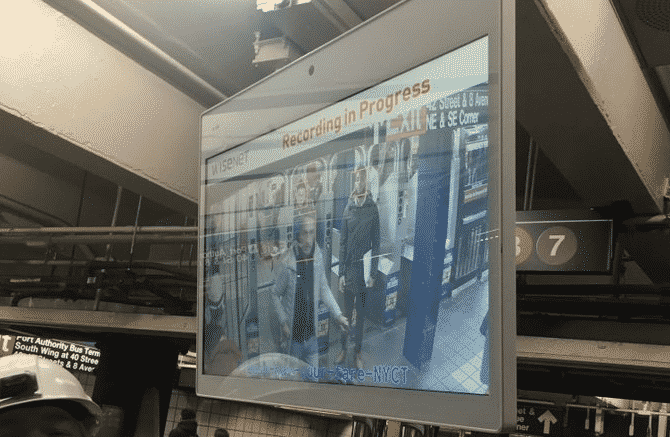 Please Share This Story!
PDF 📄
The NYMTA says it wants to catch fare evaders so it installs monitors with traveller pictures dynamically framed with yellow boxes, with a bold “recording in progress” message at the top of the screen; but they adamantly deny the use of facial recognition software. ⁃ TN Editor

The New York Metropolitan Transportation Authority has denied suggestions that it’s putting facial recognition cameras in the subway, saying that a trick designed to scare fare-dodgers was misinterpreted. “There is no capability to recognize or identify individuals and absolutely no plan” to do so with NYC subway cameras, says MTA spokesperson Maxwell Young.

Young was responding to a photo taken in the Times Square subway station by New York Times analyst Alice Fung, which shows a prominently placed monitor with the words “RECORDING IN PROGRESS” and “Please Pay Your Fare” superimposed on a video feed. “Hey @MTA, who are you sharing the recordings with?” Fung asked.

The cameras can supposedly detect motion and recognize that a human is on-screen, which is a feature that’s common in security cameras as well as general purpose photography and video equipment. “But again, there is no capability to recognize or identify individuals and absolutely no plan to,” says Young. New York’s subway system is already heavily surveilled; the MTA contracted with Lockheed Martin and others to install 1,000 cameras and 3,000 motion sensors across the system in 2005, and in 2015, the MTA said there were 4,500 cameras watching the subways. Police also conduct random bag checks in subway stations.

All one needs to know here are the names of the companies who designed, produced and manufactured both equipment and software interfaces–these are the same companies that have lied their way into every American’s life for the last 75 years. Sure, right. There is no facial recognition component in a NYC subway that houses 4500 cameras. NYC just wants your $2.75. The lies are always stupid, but the Normies still believe them or are so apathetic they don’t care. It goes without saying, not one of the behemoths mentioned is collecting, collating or selling the data to gain influence and… Read more »